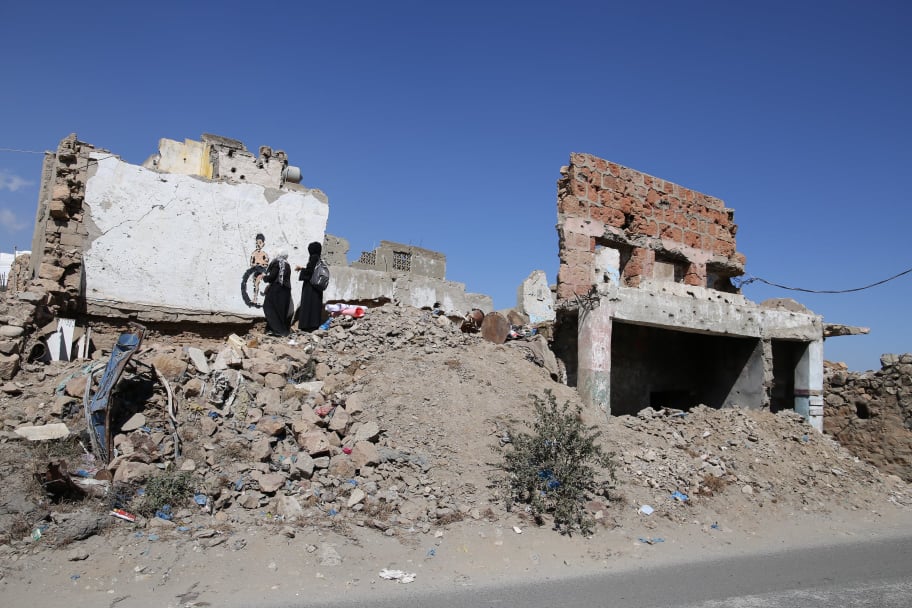 Today shall never be like any day before,” echoed the determination of Yemeni artist Khawla Almekhlafi who will take her painting kit with her today all over the streets of the city of Taiz reaching Al-Jahmalya neighborhood.

This artist has made her mind and decided to tell the stories of the children of Yemen, the victims of a five-year-long war, on the walls of the destroyed homes of Taiz. Her drawings will also depict the deteriorating situation of two million children resulting from malnutrition and poor living conditions.

It was not difficult for Khawla to pick a wall of a destroyed house to start painting on it because the ongoing war has turned this area into debris scattered all over the place. What one can see there is only remains of demolished walls leaning on each other. The area is totally abandoned. There is literally nothing except mines planted in spots known by no one except those who had originally planted them and the victims those mines are waiting for to detonate once their feet step on them.

“It doesn’t matter who used to live in this house, because any house I choose is only a representative of all the houses that have been destroyed under this war,” Khawla told Tiny Hand.

Now, it is time to start drawing!

Khawla chose a picture taken by Yemeni photographer, Abdul Hakim Mughalis, of a young boy who lost a limb and is now living in a camp for the displaced in Yemen.

She spent around an hour to finish painting Mughalis. The Yemeni artist stood on a destroyed ceiling, swinging her feet until the painting is complete. Certainly, this graffiti will not be the last. Rather, it is the first one in a project she is working on entitled “Just Numbers”.

“It is the perfect name to describe the victims of Yemen, because we are nothing but just numbers for the conflicting parties. It is also because it is no longer possible to count the number of victims until this moment or measure the suffering they have been facing,” added Khawla.

Why did you choose to narrate children’s stories in particular in your project?

“Sadly, the children of Yemen are experiencing tough war-caused conditions. War has taken away their right to enjoy normal childhood. For example, many Yemeni children are fighting with the conflicting parties and some others have been engaged in hard labor in order to earn a living to cater for themselves and their families. Add to this the dilemma of schools being shut down,” Khawla answered.

According to a UNICEF report, with schools closed, 7.8 million children are not able to access education.

The irony of Khawla’s activity lies in the fact that she came for the first time to Taiz with the aim of “drawing joyful graffiti”, according to her description, and disseminating messages of peace. Reaching Taiz, she was surprised to find nothing but destruction and devastation of all the houses in the city. This is why her drawing plan has been altered to focus on the suffering of this city.

The “Just Numbers” project includes 6 wall graffiti in Taiz, after which Khawla will return to Sana’a to paint various graffiti as well.

Most importantly, Khawla’s works have motivated many other graffiti painters to draw on walls. “We, graffiti artists, face many difficulties with several political or religious parties, because they know that painting deeply affects people and is able to convey many messages,” Khawla said.

“I am a Yemeni citizen. I graduated from the Faculty of Sharia and Law. I feel like I was born the moment I started drawing; that is, 3 years ago. Through drawing, I found my identity, discovered who I am, and realized the essence of my existence. I practiced different types of drawing and I am still searching for and working on creating my own style.”

For you, Taiz is a painting. In which colors can you describe the city?

Are you facing difficulties getting drawing colors?

We are facing the difficulty of lacking freedom and peace, and of course drawing equipment as well.

What is your dream?

Every one’s today’s and tomorrow’s dream is to sleep peacefully even for once. I wish I could close my eyes without fear and lead a peaceful and happy life. I also dream the fighting would stop in my country.

Final word: War, before killing bodies, kills souls. For how long will our souls be killed inside our bodies because of selfishness?