‘Now we don’t have to be afraid’! Syrian family who made it to safety in Turkey 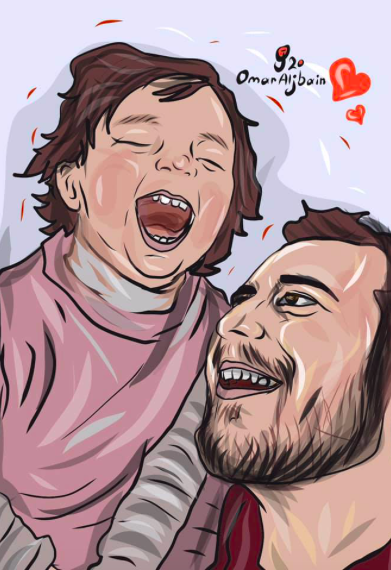 In a video shot by her father, three-year-old Salwa listens intently to the rumble of military hardware in the distance. “Is it a plane or a shell?” he asks as they sit together on the sofa. “Shell!” she shouts, giggling hysterically when it explodes.

Turning the sounds of airstrikes and shelling into a game is how Abdullah Mohammed, 32, protected his daughter from the trauma of Syria’s war. Last week the family made it to the safety of Antakya, just over the Turkish border. Dancing around her new home in a pink princess dress, for the first time in her life Salwa doesn’t have to listen to the sounds of the conflict.

Abdullah is giddy with relief. “Now we don’t have to be afraid any more,” he said. “Salwa has a completely different future.”

The family were very lucky to be invited to Turkey rather than having to pay smugglers thousands of dollars and then dodge the bullets of border guards. There are 3 million other people still trapped by a three-month-old campaign by the Syrian president, Bashar al-Assad, and his Russian allies to seize back north-western Idlib province, the last opposition stronghold in the country.

Russian airpower has emptied towns and villages of civilians and fighters, allowing the Syrian army and allied Iranian-backed militias to surge forwards and capture swathes of territory.

While Damascus and Moscow say they are targeting jihadist factions not covered by a 2018 deescalation deal, the UN says the aerial bombardment and shelling has killed more than 130 civilians in February alone, with dozens of hospitals and schools hit. More than 900,000 people have left their homes, most of them fleeing north to the relative safety of the Turkish border, in what is now the worst humanitarian crisis of the nine-year-old war to date.

The threat of a potential new influx of millions of refugees led Turkey, which supports some of the rebel groups, to beef up its presence in Idlib, sending thousands of troops and convoys of equipment in an attempt to repel the regime advance.

That in turn led to an escalation in tensions between Ankara and Moscow after at least 33 Turkish troops were killed in an airstrike last Thursday. While Turkey, a Nato member, officially blamed the Syrian regime for the attack, sources on the ground suggest the strike was actually carried out by the Russian air force.

Since then the Turks have vented their fury on Assad’s forces, destroying dozens of tanks, howitzers and air defence systems in what has been in effect a declaration of war on the regime. On Tuesday, Turkish F-16s roared over the hilly Bab al-Hawa border crossing into Idlib, where they took down a fourth Syrian jet.

Salwa’s father, Abdullah, says he feels guilty his family managed to escape while so many in Syria are still suffering. “I feel bad to leave my siblings and Salwa’s cousins and grandfather behind. At the same time though, it is not too much to ask for a life where you are treated like a human being. I can take Salwa to the park every day. She is so much happier already.”

Salwa clambers on to his lap as he talks in the living room of a friend’s house where the family are staying for now, demanding to be picked up and tickled. Neither of them can stop laughing.