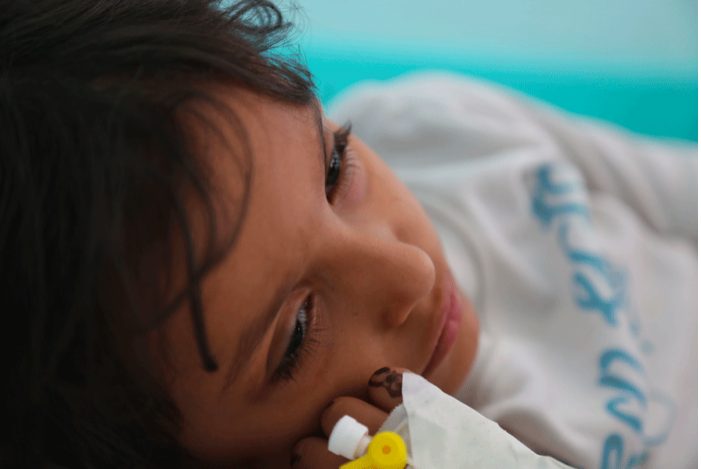 the choice loomed over Mohammed Fulait Ahmed, burdening him with shame.

His children were starving, and now his two youngest were sick – their tiny bodies burning with fever, their emaciated chests straining for breath. Mohammed’s pockets were empty and a trip to the hospital, three hours away, would cost more than he had made in months.

Desperate for help, he begged a local businessman to lend him money. The man agreed to loan him around $50 – only enough to help pay for one child’s travel to town. The other would have to stay behind.

Each day seemed to bring Mohammed a new such indignity, a painful and impossible predicament. Should he eat his share of what little food his family had, or fast to let each child take an extra bite? Should he go out looking for work he knew did not exist, or beg for khat, the narcotic leaf that many people chew in Yemen, and then try to resell it for a pittance?

Now he was being forced to choose between two children he loved, nine-month-old infants born from each of his two wives.

The boy, Ali, fell ill first, worsening slowly and then suddenly all at once. The day before, his eyes had shut and now they wouldn’t open. The girl, Reena, was getting weaker, but was still awake.

There was not much time to weigh his options. The sicker child, Mohammed decided, needed treatment first. So he and his wife Anisa bundled the boy up and began the strenuous walk down the hill to the valley below, where they hoped to find a ride into town.

In this valley in Hajjah province, where small stone houses dot the hillsides, many breadwinners like Mohammed, a short, rail-thin man, once worked as day labourers and khat farmers.

But as fuel prices soared in Yemen’s long civil war, the trucks that once showed up to take them to work started to disappear, men in the region recounted. Construction projects they worked on ground to a halt. There was intense competition for the few farming jobs, leaving many men without any source of income.

At the same time, food prices also shot up, and families were suddenly unable to buy staples such as rice and vegetables. In Hajjah province, the World Food Program has recorded a 25 per cent increase in food prices this year.

Many women, suffering from severe hunger, said the conditions have made it nearly impossible for them to breastfeed their children.

Yemen’s hunger crisis is widespread with many people in Mohammed’s area now surviving on little more than boiled leaves.

The country had narrowly averted an official famine declaration in recent years after a surge in humanitarian funding. But now, the United Nations says that without another urgent intervention, such a designation will be unavoidable. At least 5 million people are on the brink of famine, the UN has said, and some 47,000 people are already living in famine-like conditions, including 5,000 in Mohammed’s home district of Maghrabah.

This disaster is entirely man-made. There are no food shortages, just financial obstacles to buying food.

Using the money they borrowed on that August day, Mohammed and Anisa found seats in a pickup truck, which drove them several hours to Hajjah city, the provincial capital. As the truck rumbled along the unpaved valley road, Mohammed’s mind raced with worries over the child next to him and the others he left behind, he later recounted.

Back home, Mohammed’s other wife, Bushra, tried to care for the family’s eight other children. Each morning, she said, they woke crying from hunger.

No one in the family owns a phone, so she couldn’t hear news of the boy or share that the girl, Reena was only getting worse. “I worried he would die there and she would die here,” she recalled.

When Mohammed and Anisa reached the hospital, Ali’s diagnosis was grim. He was severely malnourished and suffering from a chest infection, Mohammed said the doctor told them.

Four days after Ali arrived at hospital, he slipped away. “He died in my hands,” Anisa said. “I hugged him and kissed him and that was it.”

That evening, motorbikes carried the grieving parents home. Each one took turns tucking Ali’s body, now wrapped in a white shroud, in their arms. They buried him near their house that night, covering his small grave with a mound of dirt and sticks.

Several days passed, and when Reena’s eyes shut tight like Ali’s had shortly before he died, Mohammed knew it was an ominous sign. But with his neighbours just as poor as him, there was no money left to borrow – only debts to repay.

The next day, Bushra sat in the outdoor kitchen, boiling tree leaves, known locally as halas, for lunch. Reena, sliding in and out of consciousness, slumped silently over her arm.

When the leaves softened into a thick green stew, the other children gathered around, dipping their hands into the pot and licking their fingers until it was all gone. Mohammed stood back, pouring cheap powder tobacco into his mouth to help curb his appetite.

“If we had money, we would take her to the hospital,” Bushra said, swatting at a fly that landed on Reena’s foot.

Instead, “she’s probably going to die here,” Mohammed said. “What can we do?”

That afternoon, Mohammed and Anisa walked quietly down a dirt path to their son’s burial place on a small hill.

The trees rustled in the wind. A woman herding sheep passed by on the dirt road below. Anisa, perched on a rock, moved closer to the grave, kneeling to gently pick at a thorny branch piled on top.

Nearby, her husband crouched to the ground, his collarbone protruding from under his faded button-down shirt.

“I’m thinking about the girl,” he said. “The girl is going to follow the boy.”

The day after Reena’s eyes shut and she drifted in and out of consciousness, a team of Washington Post journalists visiting the village learnt of her condition and arranged for a free ride to take Mohammed, Bushra and Reena to a hospital in Hajjah city that same day.

In a makeshift exam room in a hallway upstairs at Al-Jumhoori Hospital, a team of nurses from the malnutrition ward carefully marked down Reena’s measurements. Her height: 24in. Her weight: 11.9lbs. The circumference of her upper arm: 4.25in.

The measurements helped confirm physician Adel Ali Alabdali’s suspicion. Reena was suffering from severe malnutrition, which can weaken children’s immune systems and make them more susceptible to disease. If hunger alone does not kill a starving child, other side effects often do.

And even those who are lucky enough to receive treatment often return home to the exact same conditions that made them sick to begin with, he said. Some have to return for treatment again. Some never make it back.

He laid Reena on the table and listened to her laboured breathing. He also suspected a chest infection, he said. With antibiotics, fortified milk and vitamins, she would have a good shot at recovery.

Reena lay silently as the nurses poked her with needles to collect vials of blood and inserted a tiny IV port into her foot.

The staff looked around. In two small rooms off the hall, around a dozen other young mothers with malnourished children sat crowded on beds lined up against the wall, their babies lying beside them.

There was just one bed left, Alabdali said. Reena could take it.

Unlike her brother, she would survive.

After years of violence half the population is going hungry and 400,000 under fives are at risk of dying from malnutrition…