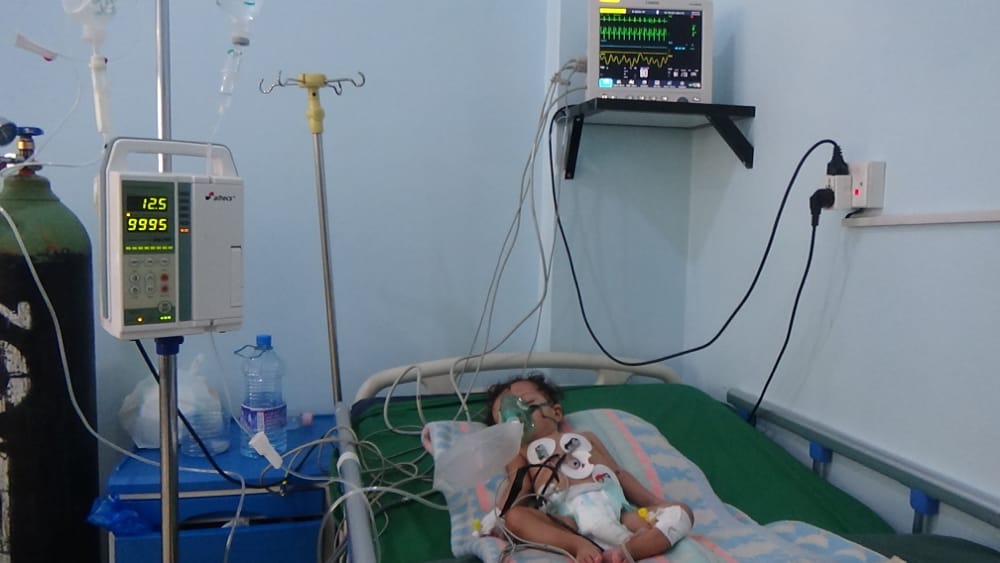 TAIZ, Yemen – The over seven-year-long conflict in Yemen has caused the worst humanitarian crisis in the world, said the United Nations, with a significant economic deterioration affecting most of Yemen’s population, widespread hunger, poverty and unemployment, and the spread of acute and severe malnutrition among under-five children.

The country’s suffering doesn’t end there. Yemen has been plagued by one of the world’s worst food crises. Parents are often unable to bring their children to treatment facilities because they cannot afford transportation or their own expenses while their children are being assisted.

Acute malnutrition incidence has skyrocketed among children and mothers in Yemen. Three governorates are the most severely hit, namely Hajjah, Al Hudaydah, and Taiz. Children with severe acute malnutrition are at risk of death if they don’t receive therapeutic feeding assistance.

According to a report issued by four international agencies in March, which was viewed by Khuyut, acute food insecurity and malnutrition among under-five children in Yemen continues to rise, affecting approximately 2.2 million children, including over half a million severely malnourished children, and about 1.3 million pregnant and nursing women, who are projected to suffer from acute malnutrition.

In Taiz, southwest of Yemen, many families complain of the deterioration of their malnourished children’s health, their weakness, emaciation and wasting, as they reach the brink of extreme hunger. The mother of Karim Shawqi, a severely malnourished child, told Khuyut that she is unable to breastfeed her few-month-old child due to the low milk supply, and her inability to provide formula milk to confront the deteriorating living conditions. Her husband is unemployed, and the family of eight has no other source of income to support its members, most of whom are children. Having no food at home, except for tea, she resorted to feeding her child with tea, given its lower price compared to milk.

Feeding children with tea, an option many destitute families resort to in order to calm their crying, hungry children, in various regions of Yemen, has worsened the health of her child Karim. This left him with severe malnutrition, amid her inability to provide him with appropriate health care, said the mother who works as a housemaid.

The lack of health care, especially for children under the age of five, is at the forefront of the reasons for developing severe acute malnutrition and the resulting diseases, including gastrointestinal infections, anorexia, and ocular and pulmonary complications, in addition to diarrhea, and vomiting.

Karim’s mother, whose child is currently hospitalized at the Mudhaffar Public Hospital in Taiz, asserts that her neglect of him has exacerbated his suffering since she cannot take care of him all the time. As a housemaid, she must go to work to secure money to support him and his siblings. She added that working in domestic service is not enough to buy all their living needs.

Karim is one of the hundreds of malnourished children who were admitted by this health facility to provide them with medical care, amid a continuous surge in the number of children suffering from acute malnourishment, which hit about 2,140 cases within one year, in addition to 173 severe cases. “This puts them at increased risk of physical and cognitive impairment, and even death,” said UNICEF Executive Director Catherine Russell, “The plight of children in Yemen can no longer be overlooked. Lives are at stake.”

While concerns are growing about Yemen’s worsening humanitarian crisis, along with the lack of international funding and humanitarian relief, children and various vulnerable community groups are the most prominent victims of this war-induced crisis in a conflict ravaging the country for over seven years so far.

Besides the severely malnourished children, Yemen’s food insecurity burdened the lives of dozens of families across the country. Taiz in particular constantly records dozens of cases of children suffering from many diseases resulting from malnutrition and shortage of health care.

“The hospital’s malnutrition department receives around 20 to 35 cases of children under the age of five per month,”  Dr. Fahd Shawqi, Director of Al-Mudhaffar Public Hospital in Taiz, told Khuyut, “The malnutrition department gets neither support nor the interest of organizations and stakeholders. It currently depends on the support provided by the hospital administration and medical staff.”

As the living conditions deteriorate in Taiz, especially in rural areas, Shawqi confirms that most of the cases received by the center come from certain areas of the city, such as Al-Kahira, and Salah, in addition to directorates such as Jabal Habashy, Al-Ma’afer countryside, Al-Wazi’iyah, and Al-Misrakh.

The lack of health care, especially for children under the age of five, is at the forefront of the reasons for developing severe acute malnutrition and the resulting diseases, including gastrointestinal infections, anorexia, and ocular and pulmonary complications, in addition to diarrhea, and vomiting.

For his part, Dr. Nashwan Al-Sami’i, head of the malnutrition department at Al-Mudhaffar Hospital, confirms to Khuyut that severe and acute malnutrition does not fade quickly, and recovery rather occurs in successive periods starting from moderate, to mild and then normal.

“If a child, early in his age, does not receive full nutrition and care, he will develop health complications,” said Al-Sami’i, “Different symptoms will begin to appear, such as diarrhea, vomiting, anorexia, and problems in the eyes, chest and intestines.”

Nutrition specialists believe that several factors have exacerbated child malnutrition cases in Yemen; most importantly is mothers’ resort to formula milk instead of breastfeeding, in addition to family disorganization and random childbearing despite the deteriorating living and economic situation.

Al-Sami’i explains that formula milk that some mothers use to feed their children cannot provide the appropriate nutrition for the child. Unlike breast milk, formula milk does not contain the same quality and specifications, he explained.

He also added that random childbirth increases malnutrition, especially among poor families which cannot meet their living needs, given the economic deterioration resulting from Yemen’s ongoing war since 2015.

This article was Translated in collaboration with Khuyut.