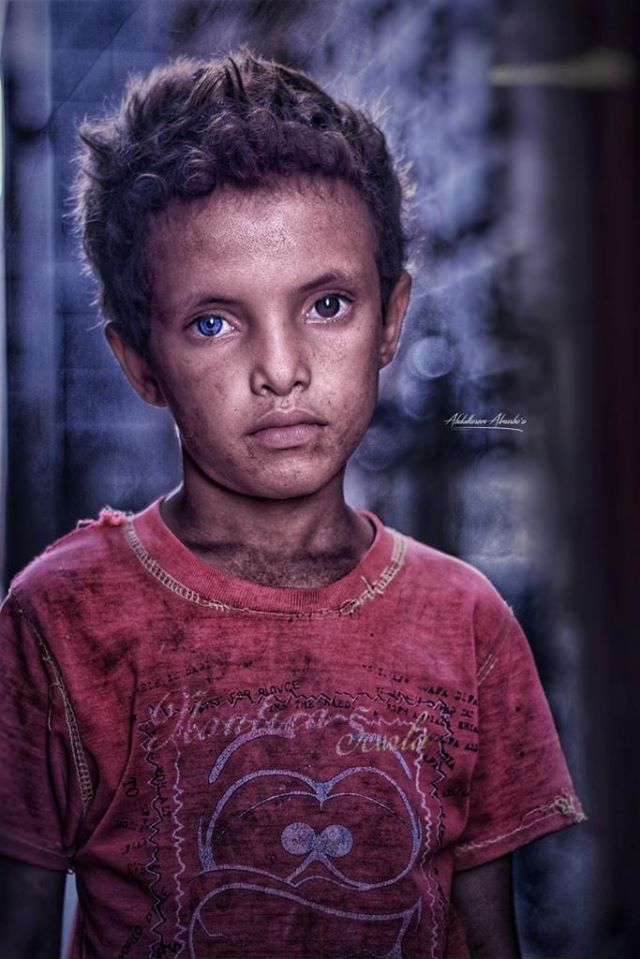 The moment you look at his face, you sink into the blueness of his right eye. His brown left eye, however, takes you in a journey through a desert or an arid land that is similar to the reality he lives in.

Eleven-year-old Riyadh al-Habsheeri is a Yemeni child who was born with heterochromia (the condition of having two different eye colors). He could have woken up in the morning, enjoyed a normal day, and gone to his school — just like any regular boy. But his day is like no other. After he wakes up, Riyadh goes to work at a restaurant in Al-Hudaydah, a port city in the western coastline of Yemen.

Yemeni photographer Abdulkarem Almarbo’a took a photo of the child. In a caption commenting on Riyadh’s photo, Abdulkarem said: “Riyadh is a child full of love and responsibility.

He works at a small restaurant to earn any money so that he could cater for even some of his family’s needs. Many of the Yemeni children are deprived of any chance to lead a normal life or play because they shoulder a responsibility that is heavier than they could bear. His different eye colors drew my attention to him.”

According to UNICEF statistics, as school year starts in Yemen, 2 million children are out of school and another 3.7 million are at risk of dropping out.

“Riyadh dropped out of school because of the harsh conditions striking his country. Being a member of a poor family, the child has to work to gain money,” Abdulkarem added in an interview with Tiny Hand.

The child’s adverse living conditions are not the only reason why he is unable to go to school. The outbreak of COVID-19, too, has imposed another challenge, leading to the shutdown of schools all over the country and leaving 5 million children out of school.

Riyadh’s distinctive eyes were not the only thing that drew Abdulkarem’s attention to the kid; the latter’s nice manners and kindness were also appealing and attractive.

His heterochromia condition might have made him one of the most exceptional children in Yemen but what is certain is that he is one of millions of children in his country who are waiting for something that could change their uncertain future in a place witnessing a 6-year war.

Seeing Riyadh, Abdulkarem could not stop himself from taking a photo of him and posting it on social media so that “the whole world could see and read about the conditions of the Yemeni children,” the Yemeni photographer said.