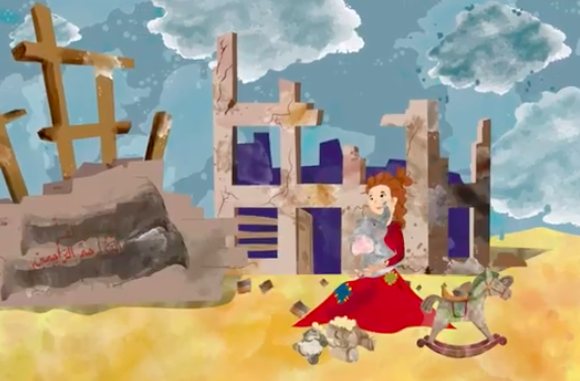 In five halls, an art exhibition, titled “The Reigning Shades of Syria”, showcased the most important photographs, paintings and videos that were produced over the last ten years by professional artists and photographers who have covered the events in Syria. Each of them documented the war in his own way and style.

With two of its animated films, Tiny Hand also participated in the exhibition.

The first film, titled “Sham”, is based on a true story of a Syrian girl named Sham. Sham lost her ability to speak on the horrific asylum journey she and her grandfather went through, taking the death boats to cross the sea between Turkey and Greece. (To watch the film in English, click here. To watch it in Arabic, click here.)

The second film is about Layla, a displaced girl residing with her family in Syria’s city of Idlib. After a missile targeted the family’s house, Layla lost her home, toys, and everything. Today, she sells used toys and dolls on one of the city’s sidewalks. (To watch the film in English, click here. To watch it in Arabic, click here.)

A number of Syrian artists took part in the exhibition, including French-Syrian photographer Ammar Abd Rabbo and artist Sarah Khayat, among others. (To visit the exhibition virtually, click here.)

Our ambassador took TinyHand’s message to the highest point in Quebec, Canada

What an achievement for all of the team of TinyHand to see our flag reach the sky….