What Happened to Nurse Appearing in “Three Babies” Photo Taken During Beirut Blast! 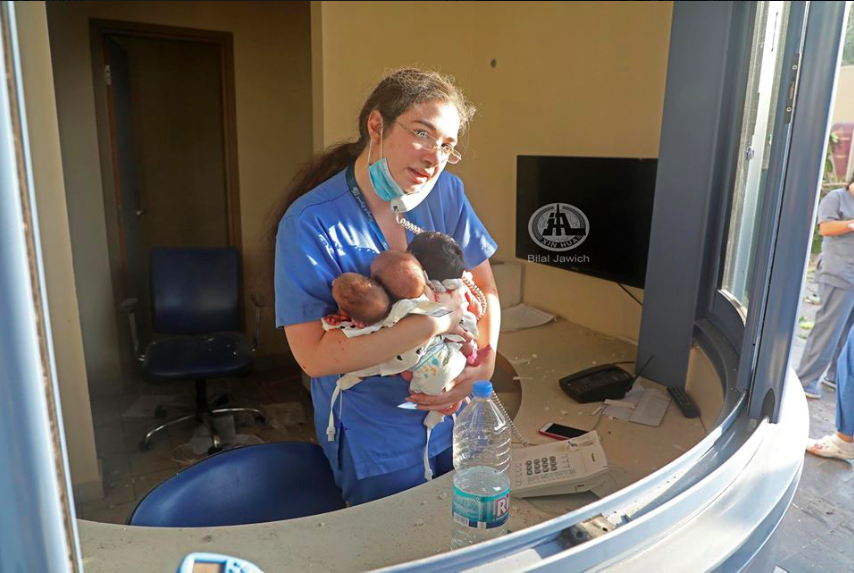 Among the photos of destruction and blood that were published everywhere at the night of August 4 from the Lebanese capital, Beirut, this photo, taken by photographer Bilal Gawish, showed a nurse hugging 3 babies tightly while trying to call out people outside the hospital. Until this moment, she has no idea what was happening.

It would have been a normal day for Pamela Zaynon, a nurse working at Al Roum Hospital in the Achrafieh district, about 3 km away from the Port of Beirut, the place where the blast killed more than 130 people and injured thousands, and the search is ongoing for missing people.

Although the hospital is not close to the blast site, it was badly affected by the destruction. “We heard a loud noise, the ground shook violently, the glass scattered everywhere, and I found myself in another room due to great pressure,” Pamela reported.

At that moment, another risky escape journey began. Carrying the four unclothed babies, Pamela and her colleague ran in the streets looking for another hospital that would take care of the babies.

There, Pamela encountered some people who gave her clothes to get the babies dressed. Then, some drivers stopped to pick her up, but the crowding prevented her from quickly reaching a nearby hospital, especially as those babies were in an urgent need of incubators.

After experiencing a hair-raising adventure, Pamela was able to reach the highway and got in a car to finally get the babies to a safe hospital located far away from the blast site.

Concluding her story, Pamela described the three babies – Ali, Sidra and Nawar – as “a piece of her.”

Those responsible for the bombing remain anonymous, while all Beirut port officials have been placed under house arrest pending investigation. At the same time, the Lebanese people swept the glass scattered through Beirut streets and continued to look for the missing bodies of their loved ones under rubble.