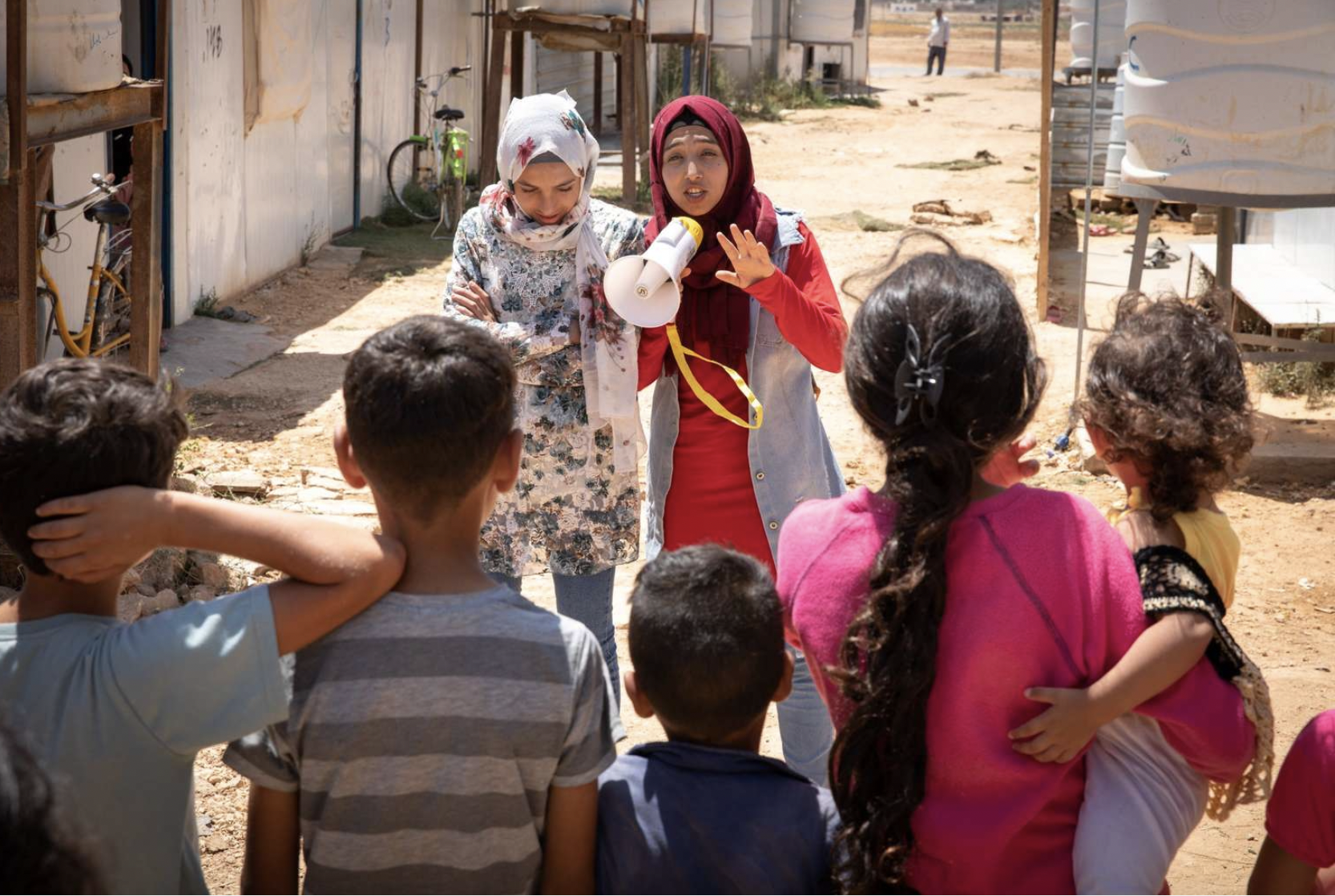 Hiba* and Rama* are normal sisters. They bicker, they talk over one another, they laugh at each other. But they’re also refugees. They’re activists. Oh, and they’re rappers.

“We are children who stand against child marriage,” Hiba and Rama flow in unison. “We will fight the world to stop it.”

These talented Syrian sisters are already changing attitudes in Za’atari refugee camp in Jordan, where they’ve lived for six years. They’ve helped stop the marriage of one their school friends and got their parents’ support to turn down proposals themselves.

“I think that many grown-ups believe in child marriage,” says Hiba, who’s 17. “And after many attempts to change their views, some were convinced. Their mindsets have changed.”

“It’s common that children learn from adults, but nowadays things have changed – adults should learn from children,” says 14-year-old Rama. “I believe we have so much to show them.”

It’s hard to believe they’ve been through so much. When the family fled the war in Syria, Rama was in a bad place. Her arm was badly injured in an explosion and she was struggling mentally. 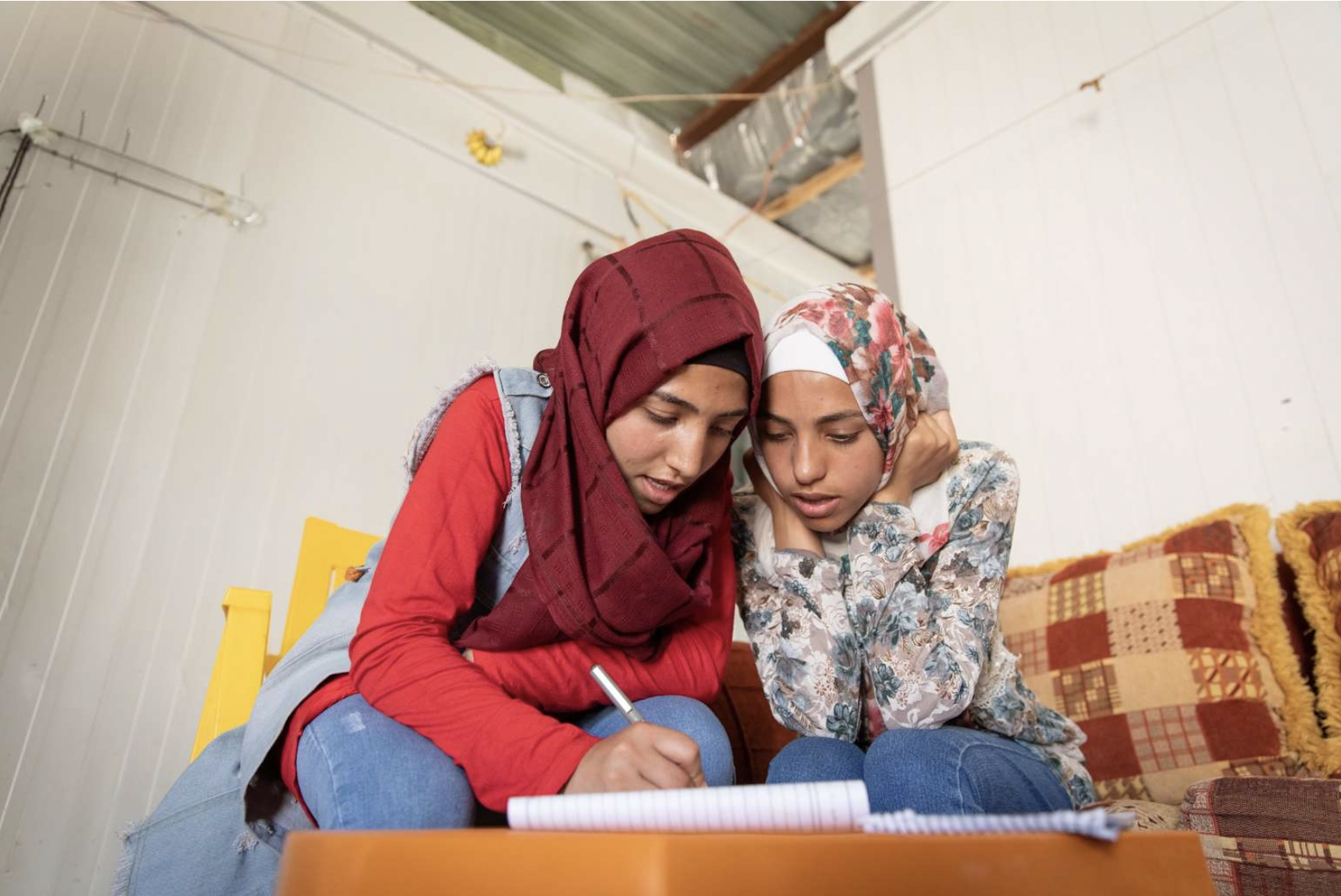 But her big sister, Hiba, helped her find fresh hope through writing and rap music. “I keep telling her that we will achieve great things and the world will know about us,” she says.

They’re growing in confidence thanks to Save the Children and Arsenal’s Coaching for Life programme. It empowers children to stand up for their rights through football coaching. And for Hiba and Rima, it’s kickstarted something special.

The girls use their talent for writing and close bond to rap and sing about one of the main issues affecting them and other girls in the camp – child marriage.

“I DO NOT SING TO ENTERTAIN. MY PURPOSE IS NOT AMUSEMENT. I SING TO RAISE YOUR AWARENESS.” – HIBA

Since they began, they’ve helped stop a girl from their school being married and got their parents’ support to turn down proposals themselves.

These inspirational activists will not stop until they have succeeded in changing the mindsets of those around them.

“HERE’S SOME ADVICE TO ALL THOSE WHO WANT TO MARRY OFF THEIR DAUGHTERS AT THE AGE OF 14: DON’T DO IT. YOU MUST SUPPORT HER INSTEAD. SO THAT… SHE COULD MAKE THE IMPOSSIBLE POSSIBLE. TO ME, THERE IS NO SUCH THING AS IMPOSSIBLE. WE CREATE WHAT’S IMPOSSIBLE AND IT’S UP TO US WHETHER WE OVERCOME IT OR NOT.” – RAMA

This new football coaching model aims to help children develop their courage and inner strength, and cope with the challenges they face. It also empowers children to know their rights, encouraging them to stand up for their right to be protected and safe.

Children can also receive further support from their parents and caregivers, who take part in child protection and psychological support sessions.

Report from: Save the children