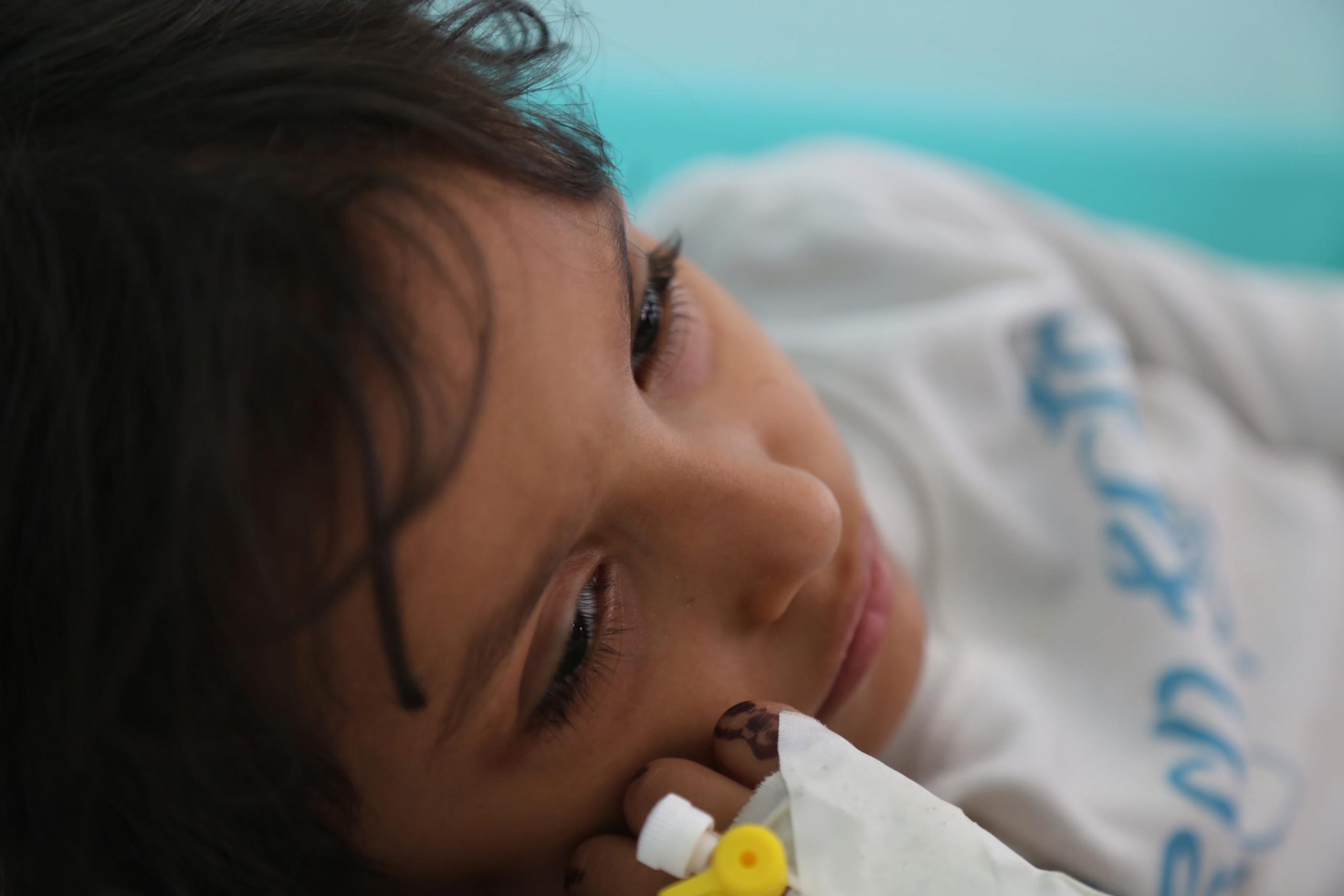 After years of violence half the population is going hungry and 400,000 under fives are at risk of dying from malnutrition

Eleven-year-old Sadia Ibrahim Mahmud was so weak she could not even move the blanket covering her tiny frame by herself.

“I want to get better, and I want to go to school,” she said, her voice barely more than a whisper. The autumn sunlight pouring into the malnutrition ward at a Sana’a hospital hurt her eyes; she turned her head on the pillow and tried to rest.

Later on, Sadia’s mother took me aside in the corridor outside her daughter’s room.

“She has never been to school. There is no school in our village,” she said. “But I swear to God, if she lives, I will build one myself.”

This terrible story repeats itself all over Yemen every single day. “Famine” is a complex technical term, which requires quality data that the country lacks. Labels aside, however, 16 million people – or half the country’s population – are definitely already going hungry.

As the UN struggles to raise funds for its humanitarian programming for 2021 – even from countries such as the UK and the Gulf monarchies, which play an active role in the conflict – the situation is only going to get worse.

Aid agencies warn that 400,000 children under five are at risk of dying from malnutrition. In Shabwa, a province I visited at the end of last year, the number of serious cases rose 10% in 2020. A hospital in Abs serving remote mountain village communities has just reported a 41% rise in serious malnutrition cases compared with the same period last year.

For children who manage to survive malnutrition and Yemen’s devastating outbreaks of cholera and dengue fever, the future still holds many hazards. A doctor in Shabwa put it succinctly when he said he worried that the country was losing a whole generation to war.

The average age of marriage for girls in some rural areas was just 14 before the war broke out, and has only dropped since. Boys as young as 11 are recruited to fight by parties on all sides of the complex conflict.

Death also comes from above in the form of Saudi- and Emirati-led coalition airstrikes.

The 70% of Yemenis living in Houthi rebel-controlled areas are well aware it is nations like the UK that enable bombing raids on their weddings, hospitals and schoolchildren.

Technical information and serial numbers from missile parts are easily traced to western arms manufacturers, and many families hang on to such evidence in the hope that, one day, justice for their loved ones will be served.

And while Joe Biden has said ending Yemen’s war is a priority for his administration, the renewed diplomatic push is unlikely to slow an intense upsurge in fighting since the beginning of the year over the central province of Marib.

The Houthis are on the verge of victory in the oil-rich area, a development that would oust forces loyal to the Yemeni government from their last northern stronghold and greatly complicate efforts to bring the parties back to the negotiating table.

“We already had to leave home once,” Hamas al-Muslimi, a 21-year-old student originally from the green highlands of Thamar now living in Marib city, said in a WhatsApp message.

“Now we suffer ballistic missile attacks all night, and drones flying over the city all day. I am exhausted. Aren’t they exhausted from fighting? What is left?”