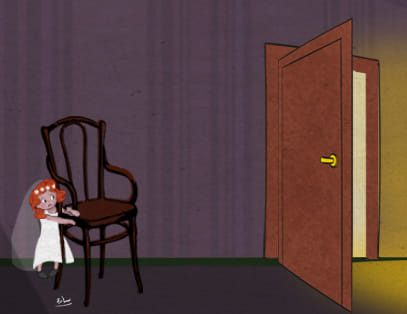 Suddenly, without prior warning, the doll was taken from Lanah’s hand and a ring was put on her finger. “You are engaged to this young man,” her father told her.

Before the thirteen-year-old girl uttered a word expressing her refusal, her father had already taken the decision. “I decided and will not change my mind,” her father said.

The doll was not the only thing Lanah lost that night. She also lost her school and her country, Syria, from which she fled to Lebanon. The child got married in the first years of war in Syria.

It was also because of war that this “child wife” lost that husband shortly after their marriage to find herself married to her brother-in-law. This time, too, it was not her own decision.

Lanah’s early marriage is one of many stories shared with us by “Let Me Keep My Childhood” campaign about minor girls who found themselves in small rooms with men and did not realize what their mission was or what brought them there.

The difference between those girls and Lanah is that this little girl finally decided to change the course of her miserable story and initiated divorce proceedings despite the fact that she is a mother of two children.

“My father refused that my two children come back with me and I was forced to leave them with my husband’s parents,” Lanah said. This decision was not easy and this encouraged Lanah to participate in “Let Me Keep My Childhood” campaign in Lebanon to share her story with everyone. “Maybe no one had heard me refusing my marriages every time, however, I am sure that someone will hear the other girls and prevent their early marriage,” she said.

This is exactly what the campaign has been doing over the last year in the Syrian refugee camps in Lebanon in particular. The reason is that in such places “40% of refugee girls are forced to get married at early age,” as reported by the campaign’s media coordinator, Anas Tello.

Tello told Tiny Hand that the awareness campaigns carried out by this group contributed to preventing many marriages, including “150 families who have reversed the decision of marrying their minor daughters.” “In addition, 1,800 families have signed against the marriage of minor girls,” he added.

What is unique feature about this campaign is that these families put the campaign’s slogan “Let Me Keep My Childhood” written in red on their houses’ frontages or printed it on the fabric of their tents.

This mission is not that easy at all with more than one million and a half Syrian refugees living in Lebanon. Discussing a topic of this high level of privacy and sensitiveness requires using different methods. This includes sharing Lanah’s experience and the stories of many other girls like her with the target families.

The supervisors of this campaign are working with religious leaders and families who regret marrying their daughters in order to contribute to raising awareness on the risks and consequences of child marriage.

The campaign is, therefore, recording videos explaining such dangers and publishing them on social media.

Here is another story of a girl who fell victim to child marriage. She, too, takes part in the campaign:

“At my sixteenth, my dream was to wear the white bridal dress. It was the dream of many girls in our town. All the talks of women and girls in gatherings, visits, and parties were about this topic. A mere white cloth turned into a dream that haunts most girls instead of the dream of achieving academic success and work independence. At that time, my father encouraged me to make the decision and accept marriage to a person who asked for my hand. My mother totally refused the idea, even though, I did not listen to her, as my only concern was to wear the bridal gown.”

“Then came my wedding night. I have never forgotten how my mother refused to bid me farewell on the doorstep of the house. Later, I wished my mother’s refusal had been more stubborn at that moment to prevent me from crossing that damn doorstep.”

“Afterwards, I felt older than my actual age and started to have kids. My dream of the white dress started to turn into a nightmare. I did not endure my social role being restricted to that of a housewife. So, I insisted on going out to work. This caused a lot of marital problems that I was able to cope with to some extent, but not for a long time. Then, after I took refuge with my family in Lebanon due to war, these problems mounted and reached the climax.”

“In Lebanon, I worked tirelessly to support my small family as my husband was unemployed. Later, I had to make the decision of seek divorce after I had discovered his betrayal while I was at work. Most importantly, this decision was made when my painful experience was repeated by my ex-husband. This time, it was not me, but my little daughter, as he forced her to get married at the age of fourteen, and she got divorced and came back sick after several years of marriage.”

“After more than twenty-five years, I, the child mother, was able to end this experience. However, I could not, and will not be able to, get rid of the long-term impact of such a painful 25-year-old experience.”

“Today, I am part of this campaign because I am sure that my experience will act as a deterrent to many girls who dream about that white dress.”

What about you? Do you, too, have a story you can share with us to spread awareness about child marriage? If so, please send it by email: [email protected]