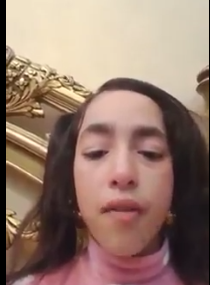 A video of a girl, aged 13, has shaken the Moroccan society powerfully as she assured, with uncontrollable tears, that she was raped and sexually assaulted by her paternal uncle and a neighbor.

Iman, the raped girl, appealed to the Moroccan people and authority to help and save her from the miserable situation she is in, especially after the court had found the uncle to be innocent and sentenced the neighbor to one year in jail.

Sources close to the girl told Tiny Hand that “Iman tried to commit suicide several times. She is now suffering from a severe psychological trauma; therefore, she is being treated by a psychiatrist.”

Reacting to the video that went viral on social media platforms, Fes City Security State Division launched a judicial investigation under the supervision of the Competent Prosecuting Authority to verify the criminal act reported by the minor child.

Fes City Authorities asserted that the sexual assault incident reported in the video was already subject to judicial investigation in January 2020; that is, nearly more than a year ago. Back then, the cell caring for female victims of violence in Fes City reacted to a video showing the minor victim’s father reporting his minor girl being sexually assaulted by her paternal uncle and neighbor.

The communication of Fes State added that the two accused individuals have been under judicial investigation along with other two women suspected to be involved in this case. Afterwards, they were taken to court that eventually issued the appropriate verdicts in this case. Meanwhile, the victim was placed in a center for protecting minor girls in accordance with a judicial decision to receive adequate care.

For its part, La Ligue Marocaine de Défense des Droits de L’homme (LMDDH) expressed solidarity with the minor girl, saying that she was a victim of rape by her paternal uncle and neighbor. The association called for providing the necessary protection to the girl along with the essential well-being, particularly psychologically.

LMDDH President Mohamed Bellamhidi called in press releases for the application of “chemical castration as an alternative and deterrent penalty in the event of committing crimes of indecently and violently raping and assaulting minors.” “Implementing this punishment has achieved effective results in other countries,” he argued.

“I apologize and want the Moroccan people and Adnane’s parents to know the truth about what happened, so that I can have a clear conscience. I did not rape Adnane, but kidnapped him because I was in need of money….

“It’s freezing over here. We’re in the mountain and the snowfall is heavy. I feel cold. I want you to bring me a coat, gloves and socks.” With these simple words, the child Abdul Salam was able to draw the Moroccan people’s attention to the miserable living conditions in his remote village. …