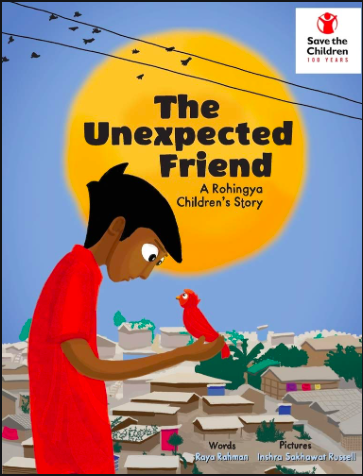 With the belief that marginalised communities have every right to be heard, writer Raya Rahman and illustrator Inshra Sakhawat Russell worked together on the book, The Unexpected Friend, which tells the story of Rohingya children.

The book was published on December 10, 2019, in both English and Bangla, by Guba Publishing, in partnership with Save the Children.

Throughout decades, over a million Rohingyas have fled the violence in the Rakhine state of Myanmar. The persecution of the Rohingya people led to the exodus that began in August 2017, marking one of the most tragic humanitarian crisis in recent history. The biggest victims of this catastrophe were women and children, who witnessed the targeted violence and are limited to the identity of refugees today.

The plot of The Unexpected Friend revolves around Faisal, a resident of the refugee camp in Cox’s Bazar, who finds an injured bird. The medical clinics of the camp are crowded by patients who are in urgent need of help.  Amidst the long queues of refugee patients, no one notices the injured bird. Subsequently, Faisal decides to care for the bird with his sisters. The children, thrilled to have a pet, face a dilemma once the bird’s wings start to heal. While the book focuses on the children, it subtly mentions the issues of exodus, life in the refugee camp, the daily struggles of the refugees and the deforestation which resulted from the crisis. Dedicated to the Rohingya children, the illustrated story is based on a report by Linda Steinbock and Eline Severijnen, titled Childhood Interrupted: Children’s voices from the Rohingya Refugee Crisis (2017).

The illustrator Inshra said that Steinbock and Severijen turned to Guba Publishing to work on a book that could educate Bangladeshi kids and the international community about the hardships of the Rohingya children.

According to the author, the little red bird, the titular ‘unexpected friend’, symbolises childhood innocence. The author and the illustrator further spoke about the challenges they faced while depicting a sensitive issue like the Rohingya refugee crisis.

“The initial drafts contained backstories about the violent situation in Myanmar, but child protection advisors from Save the Children asked us to remove that bit, as they wanted the story to be a form of escape for kids. Any kind of political rhetoric is also absent from the book. Ultimately, the story focuses on the feeling of community amongst the residents of the camp,” said Raya. “It is about how hope can emerge even from the most unexpected places.”

The book, written for children between the ages of three and ten