The Little Yemeni Woodchopper: Not Only Wood but Also Dreams Are Axed 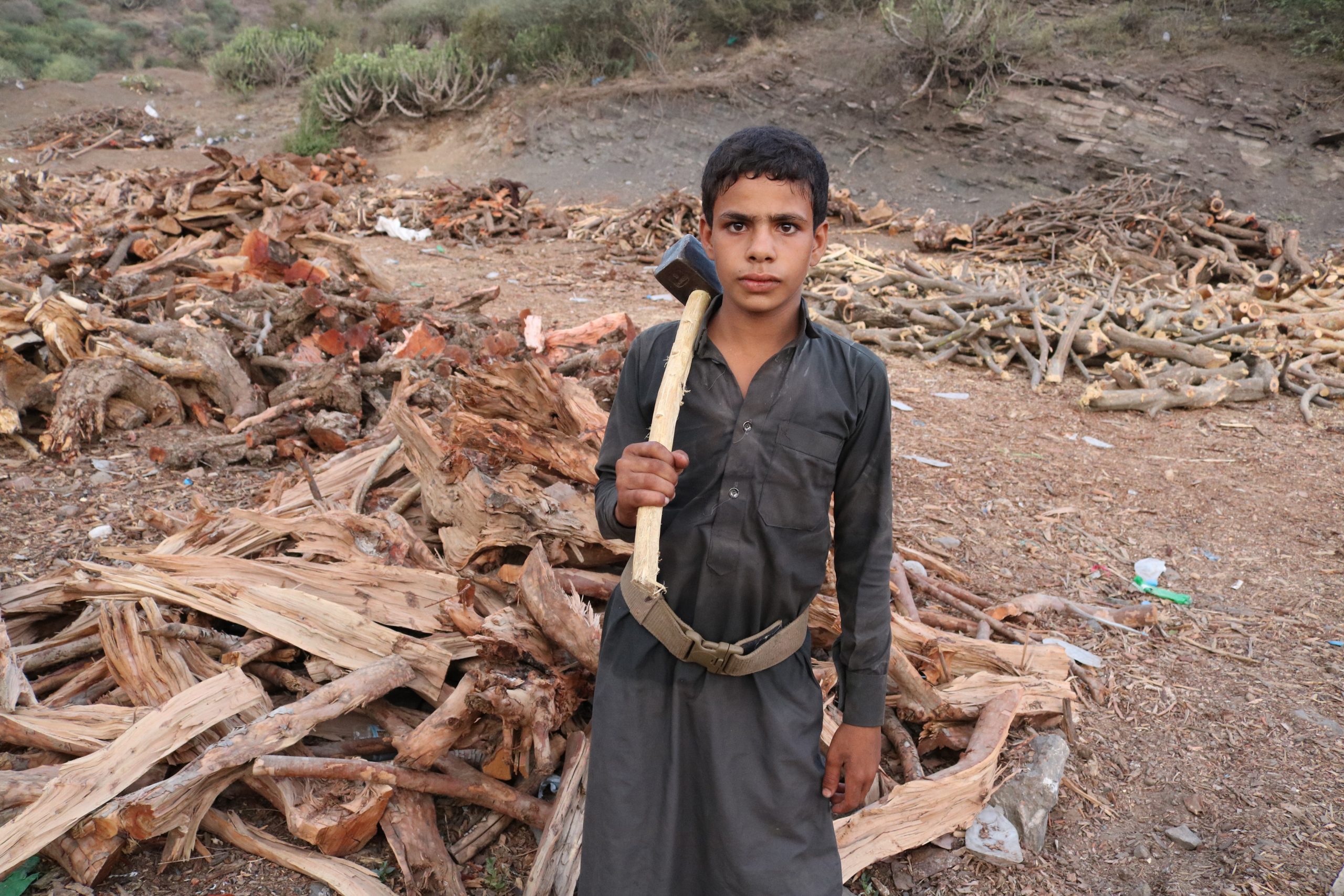 Young Khalid works as a woodchopper at a village in Haraz. His chops wood into small pieces from early morning till very late at night. After he finishes cutting the wood, his uncle starts collecting it to sell it in Sana’a.

This was a brief account about the life of little Khalid who is less than eleven years old! Neither does he play nor have fun! Rather, he carries an axe to cut wood and collect timber for his uncle who works with him.

Khalid has neither chosen nor wanted this job. However, he is obliged to do what his family wants him to do. Like many Yemeni children, Khalid, who was interviewed by Khuyut in a village near Haraz, toils all day long in chopping wood to sell it in Sana’a. Many houses and restaurants need wood because of the lack of petroleum derivatives, such as cooking gas.

War had brought about all this!

The situation has become worse, even devastating, with the passage of years, says Mujahid al-Uzzi, the 45-year-old timber collector and seller. He has been collecting and selling wood in Sana’a for more than 6 years. In fact, securing a gas cylinder for cooking has become quite difficult, especially that its price has reached 9700 Yemeni Riyals. This made many Yemeni families seek alternatives, such as timber the price of which is lower compared to gas. Such circumstances add to Yemenis’ ongoing and accumulating sufferings.

Though it is a hard job from which he makes a living, he wishes to discontinue performing it. That is because cutting wood has a negative effect on cattle and the whole environment.

Children living in villages and whose bodies are too immature to tolerate such tasks are obliged to undertake them. In return, they earn only very little wages if they receive any money at all. However, Khalid and his little peers endure such tasks hoping that they might cater for their families.

As for Khalid’s dreams, he wishes he could enroll at school to eventually become a physician and cure people’s maladies.

A recent report released by the International Labor Organization indicates that conflicts and crises raised the percentage of child labor across the region. Such crises include children’s involvement in armed conflicts and other illegitimate activities.

The child labor report, entitled “Conflict and Mass Displacement Increase Child Labour”, points out that, “over the past ten years, during which the region has witnessed high levels of armed conflict resulting in the mass displacement of populations – both within and between countries – the situation has certainly worsened.”

The study reports that children in parts of the Arab region “have been increasingly drawn into the worst forms of child labor and face serious and worrying exploitation, abuse and violation of their rights.”

This article was Translated in collaboration with Khuyut.