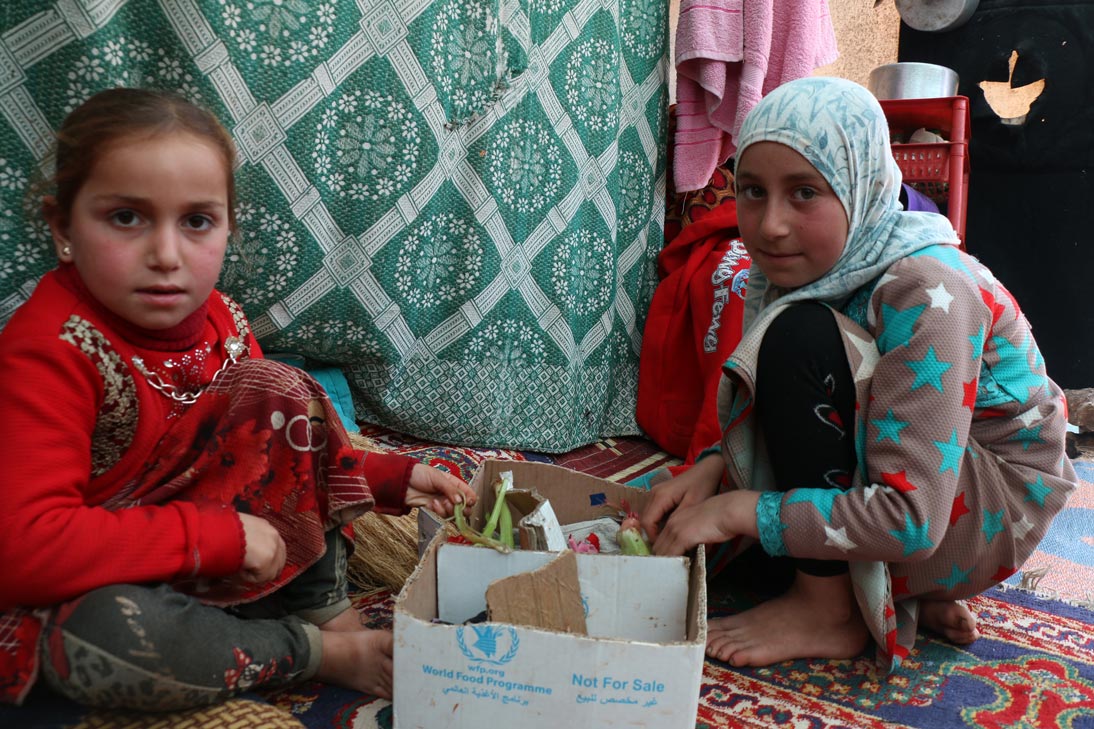 Asinat and Hazar take some time playing together inside their tent and they continue to have fun until they hear the parents, the neighbors, and everyone in the camp talking about the Coronavirus.

The two sisters never leave their tent except for going to the communal toilets following the numerous recommendations to wash their hands and never come close to the neighbors. However, the shortage of water supplies makes such recommendations a sort of luxury.

Amid the difficult living conditions in tents made of torn sheets and ripped plastic covers while lacking the least healthcare services, the spread of the Coronavirus into the Syrian refugee camps, if it happens, will be a real tragedy.

Hazar, a nine-year-old girl, sits quietly inside her torn tent eating up an apple while following her father’s talk about the conditions of Qabr Faddah village, located in Sahl Al-Ghab region, as he says, “We are living a tragedy here.” Then her mother commented, “Thanks to Allah. This is what Allah has destined for us and He is the Best Disposer of all affairs.”

For the 2nd grade girl, the tragedy will take place if any of the children in the camp gets infected with the virus that is described by the older ones as “lethal and deadly”.

Hazar says, “I stay at home all the time. If I have to go outside, I put my hand on my mouth and wash my hands several times in the communal toilets.

Despite the fact that handwashing is one of the most important measures to protect ourselves from the Coronavirus, it is not possible most of the time due to the shortage of water supply. This threatens the life of thousands of Syrian families and their children.

For Asinat, six years old, her fear of the COVID-19 was so immense that it turned into an extreme hatred of the virus, which she called “the children killer”.

Without preparations or disinfection!

The anger felt by the two children’s father was not arbitrary when he described the situation as a “tragedy”. For over 9 years of a devastating war in Syria, hospital and healthcare preparations have been badly damaged, making the outcome of the confrontation against the Coronavirus with its two aggressive strains known in advance by the medical staff.

Misty Buswell, Middle East Policy Director at the International Rescue Committee said, “All the essential things needed to avoid the virus outbreak are in short supply.”

It is not a matter of poor health systems in the refugee camps, which experts warn that the virus will invade, but rather the absence of these systems most of the time.

The UN and humanitarian aid organizations are facing the task of trying to protect 70 million internally displaced people from a virus that has hit hard the world’s best healthcare systems.

Refugees caught between a rock and a hard place

In the Middle East, millions of people have been forced to flee their homes because of the war in Syria, the fight against ISIS, and other conflicts. These people are still displaced in random camps, overcrowded, or incomplete buildings.

Relief groups intensify the distribution of soap and water and disseminate information about the virus throughout the region. The camps are also being sprayed with disinfectants, while the Syrians in the camps do their best to follow health guidelines.

The United Nations Relief and Works Agency for Refugees (UNRWA) has launched an appeal for its emergency works of $33 million to deal with the crisis but many countries that have traditionally been responding with a donation are now struggling to contain the outbreak of the virus.

Therefore, refugees will face unprecedented competition for emergency medical resources, as organizations such as Doctors Without Borders, which usually help the most vulnerable in the world, send teams to places like Italy, making refugees and displaced people the closest to lose in such competition.

In turn, the UN World Food Program, based in Rome, where the new Coronavirus pandemic outbreak came out of control, has developed new food distribution guidelines this week that include non-contact rules, mandatory temperature checks, and instructions for making a 0.5% chlorine solution for hand wash to be used by the aid recipients.

the UN World Food Program“Everyone is very focused on what is happening in their country, but this virus knows no boundaries,” says.