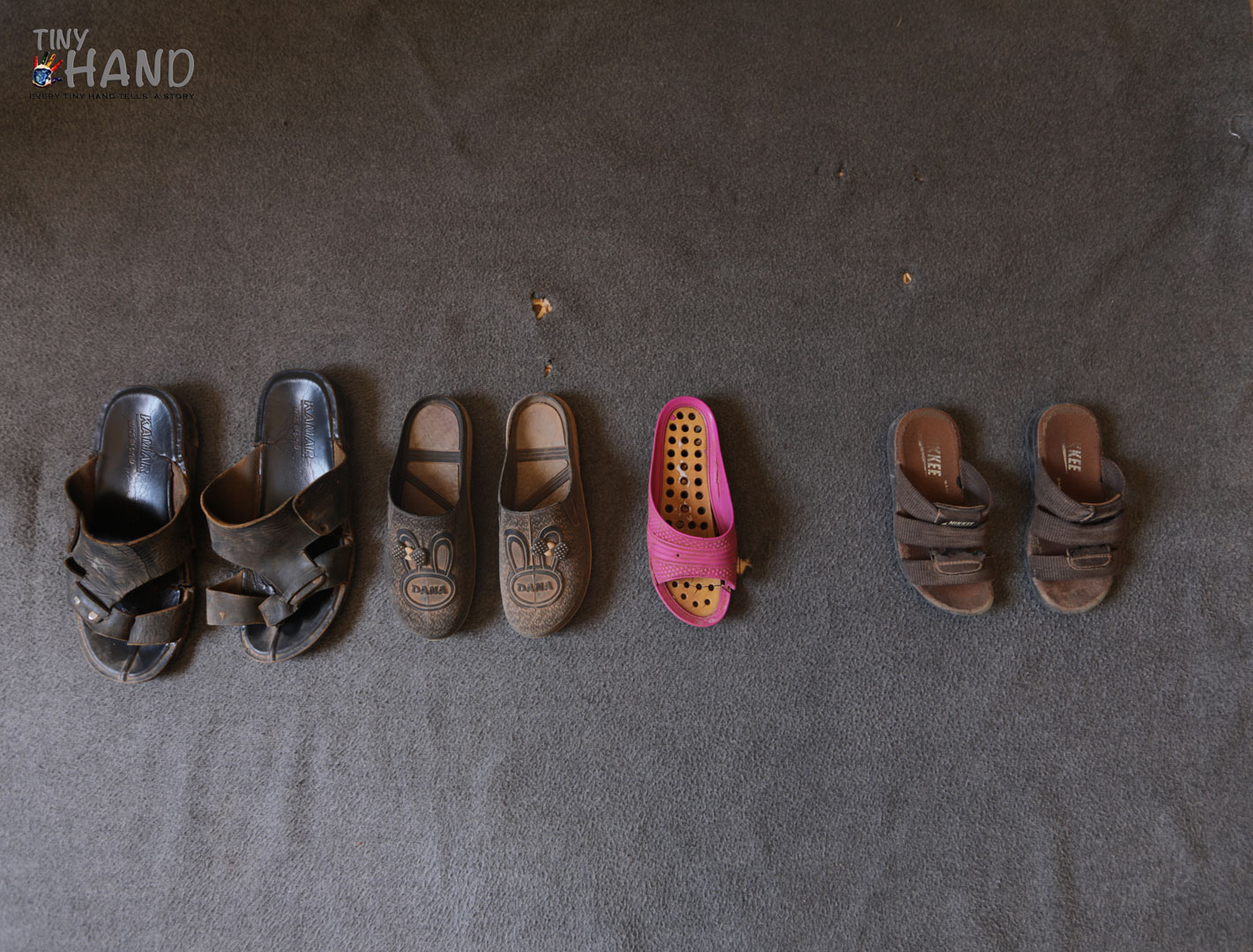 The day my feet were amputated: when rockets deprived Syrian children of their most precious things: their limbs.

Lying on the bed, with her back rested on a pillow, Duaa slowly regained consciousness. Everyone around her was crying; with tearful eyes or bleeding hearts. The little girl stared at her fingers before she looked with frightened eyes at her lower limbs.

She had a different feeling when she looked at her lower limbs. One of them was intact and she could move her toes back and forth, while the second seemed shorter. That limb’s toes were missing; the leg itself was not there, as the missile that fell next to the child not only snatched the lives of those who were around her, it also took her leg away.

Now, Duaa, 13, lives with one limb in northern Syria. She is one of the thousands of Syrians whose feet or limbs were amputated due to shell and missile injuries.

The little girl and other children experienced what can happen to a human being within a few seconds, and how such minutes can reshape one’s life once and forever in a way he/she can never expect.

Before the aircraft targeted her house with a missile, Duaa was playing in the courtyard with her relatives. Their laughter could be heard throughout the house before it turned into wailing and sounds of terror.

During our visit to her house, Duaa sat next to the prosthesis she relies on to continue her life. The little girl now knew that 3 missiles had been fired at their house on that day. “It was a Russian aircraft,” she said.

Large shrapnel penetrated the girl’s foot, leaving her bleed heavily amid a state of stupor and fear. At first, Duaa saw the blood dripping from her foot before he was rushed to the hospital.

Doctors’ days-long efforts did not succeed in saving Duaa’s limb. The injury became a threat to the rest of her body which forced doctors to decide that Duaa had no escape from having her leg amputated.

The foot was amputated, taking away with it all the girl’s dreams she once hoped to achieve. The shrapnel killed the child’s determination and almost locked her up in the house. She no longer played with her friends on the street. She no longer jumped her rope.

The prosthetic limb has become an essential part of Duaa’s life. While it is true that it has become something that eases her ordeal, it is also a burden on her for she needs to replace it every period to match the growth of her body. 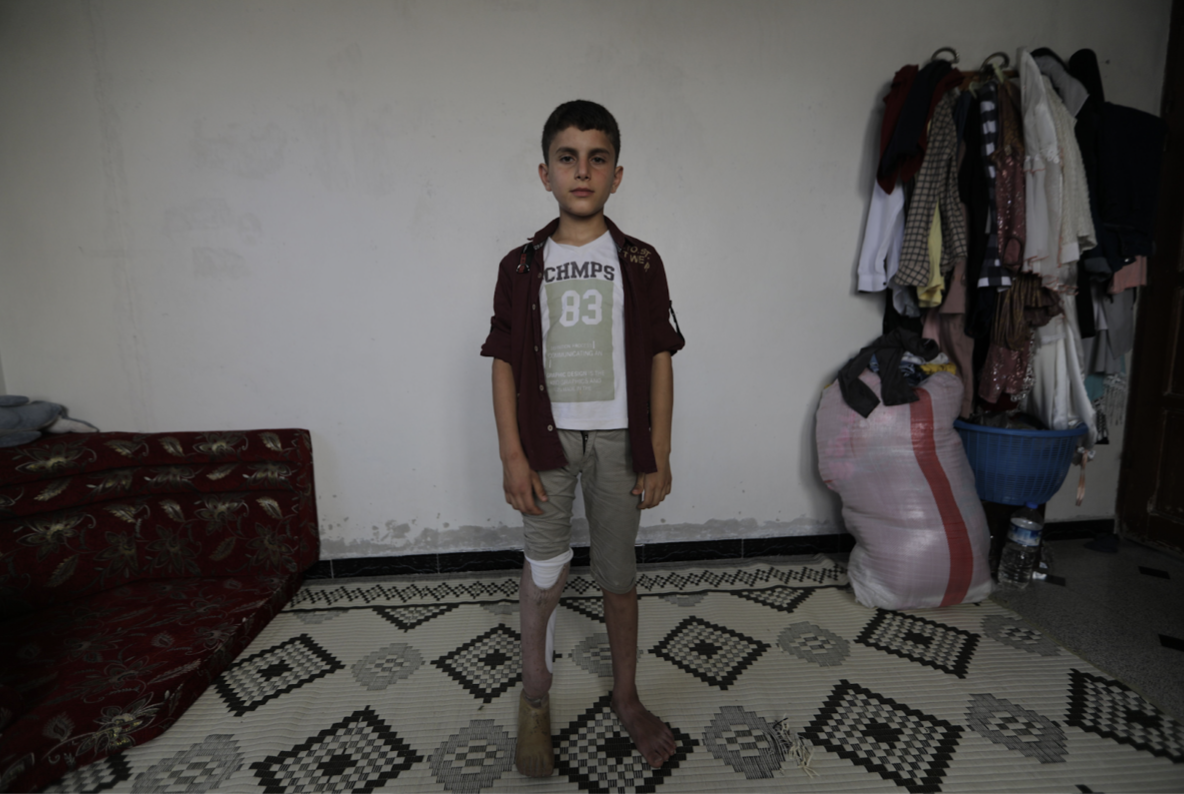 Now, Duaa cannot wear the prosthesis because it is too small to fit the upper part of her leg. If she had to wear it, she would feel pain.

Duaa’s loss of her foot also stopped her going to school for years. It negatively affected her social life, with only a few friends left now.

Duaa wishes her memories of that attack’s day had gone with her limb. She still remembers the details of that day and how she hid with her relatives, thinking they were safe from the missiles.

In the end, Duaa’s leg was amputated, and her painful memories remain. The child feels sad when she compares her current life with the one she used to have before losing her limb. “I used to play and run,” she relates, “Now, I am forced to stay at home.” 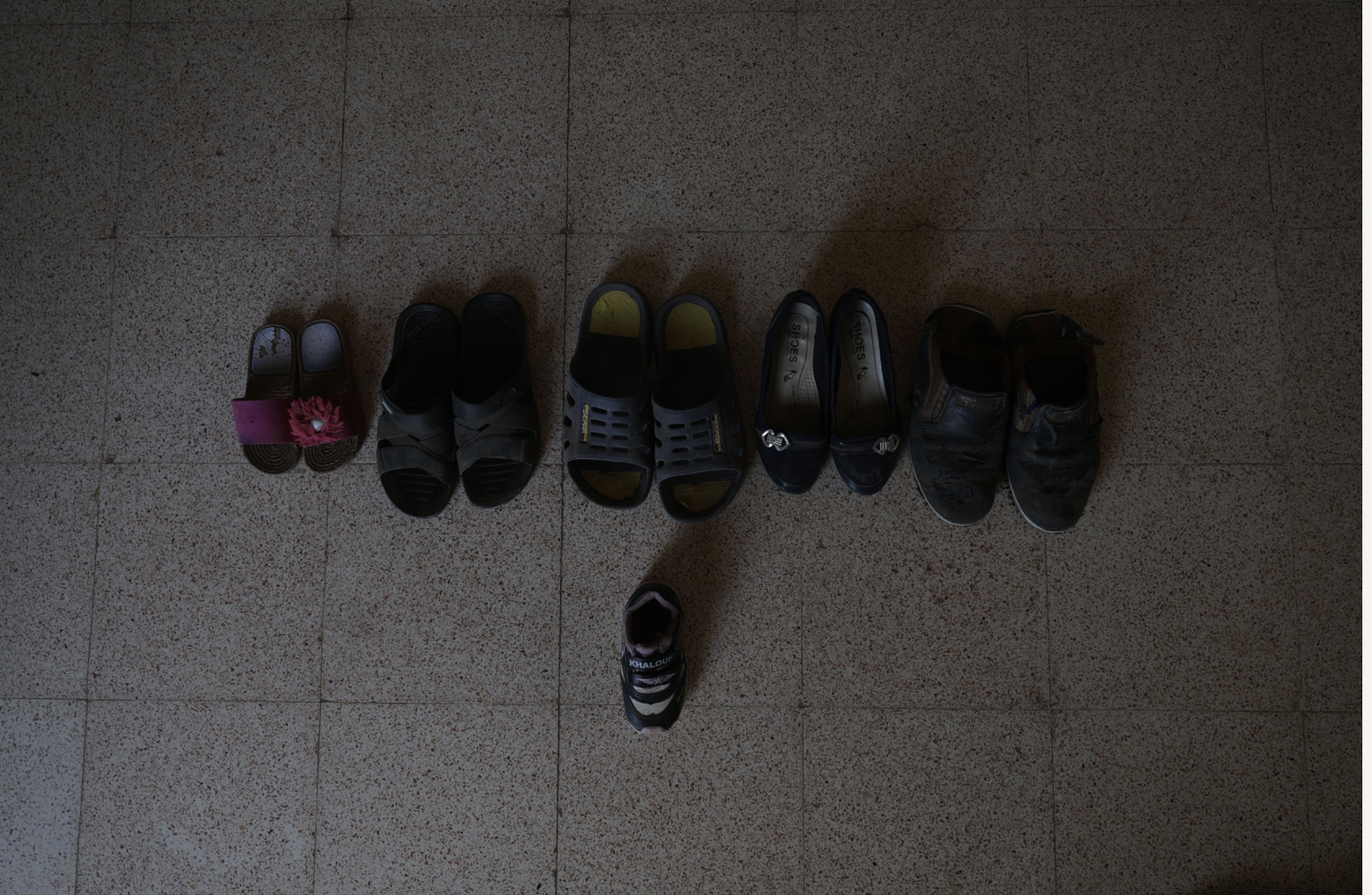 The World Health Organization estimates that at least 86,000 Syrians had suffered wounds that led to amputation due to the war. Moreover, at least 1.5 million people suffer from permanent disabilities. Estimations of health centers in northern Syria indicate that a higher number of Syrians might have their feet amputated. Some of whom moved to live in other countries.

Children usually drown in their tears when they lose their toys. They sometimes make adults raise their eyebrows when they grieve over a lost piece of chocolate or chips. So, what if children lose a part of their bodies!

Similarly, Mohammed, a 10-year-old boy, suffers from terrible psychological effects due to the loss of his foot, and his relatives who died in front of his eyes after they were all bombed in northern Syria.

Minutes before the missiles landed on Mohammed’s house, the child was sitting on his school desk with his friends whom he loves and who love him.

His cousin was the last person sitting next to Mohammed before the tragedy. The girl and he were like twins in their closeness to each other. One of the missiles killed the girl, leaving Mohammed’s body full of shrapnel that not only penetrated his feet but even his intestines. That forced doctors to perform a life-threatening surgical operation on him.

Mohammed’s foot was amputated. He now depends mainly on a prosthetic limb to continue his life. If he loses it or has it damaged, he would feel great grief.

Mohammed does not forget the details of the day he was injured. He remembers how he was rescued from the rubble and how his foot was amputated. 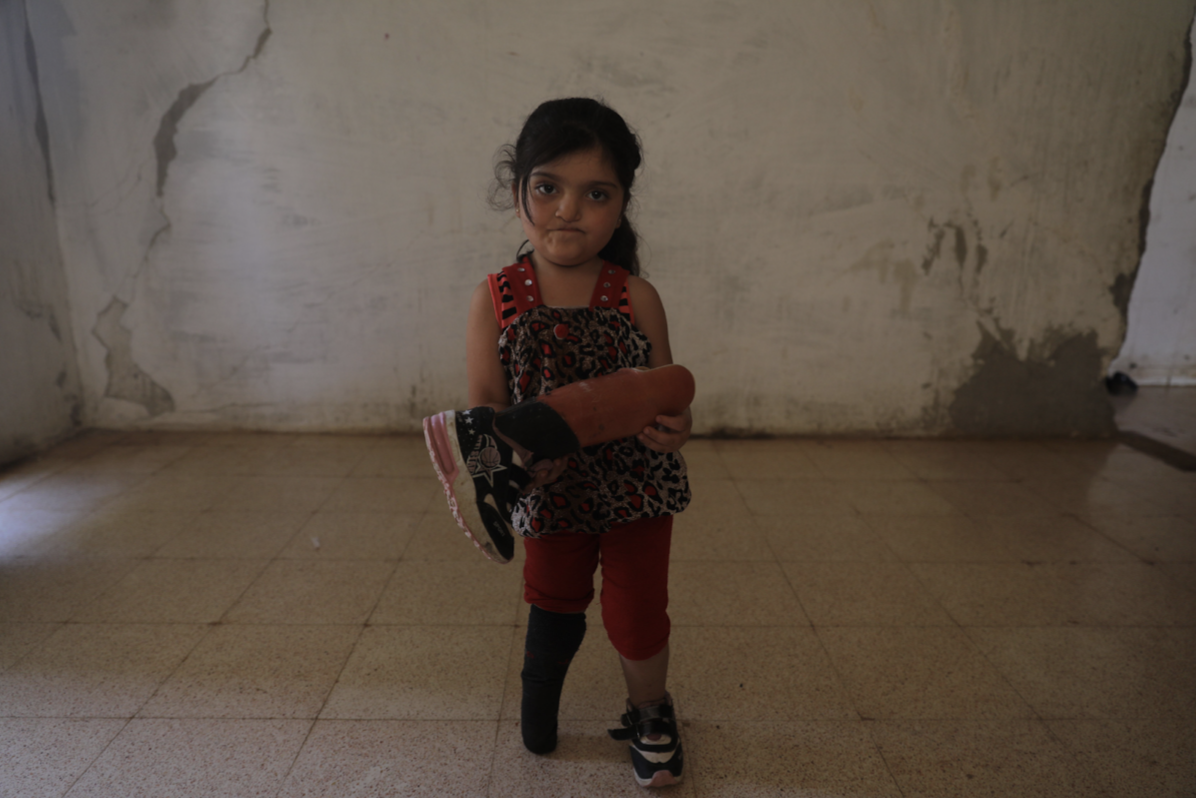 Mohammed and his family are also sad as the child has hyperactivity. Such children usually move and play a lot, but Mohammed cannot do this now. This leaves him with an additional burden.

Nevertheless, Mohammed hides his grief over the loss of his foot with a great determination not to make those around him feel that he is dependent on them. He is very fond of getting out and helping to buy the necessities of the house. He also wants to work and help the family secure their daily sustenance.

“At first I felt pressure from using the prosthesis,” he told Tiny Hand, “Over the years, I began to adapt to it and it became a natural thing for me.” 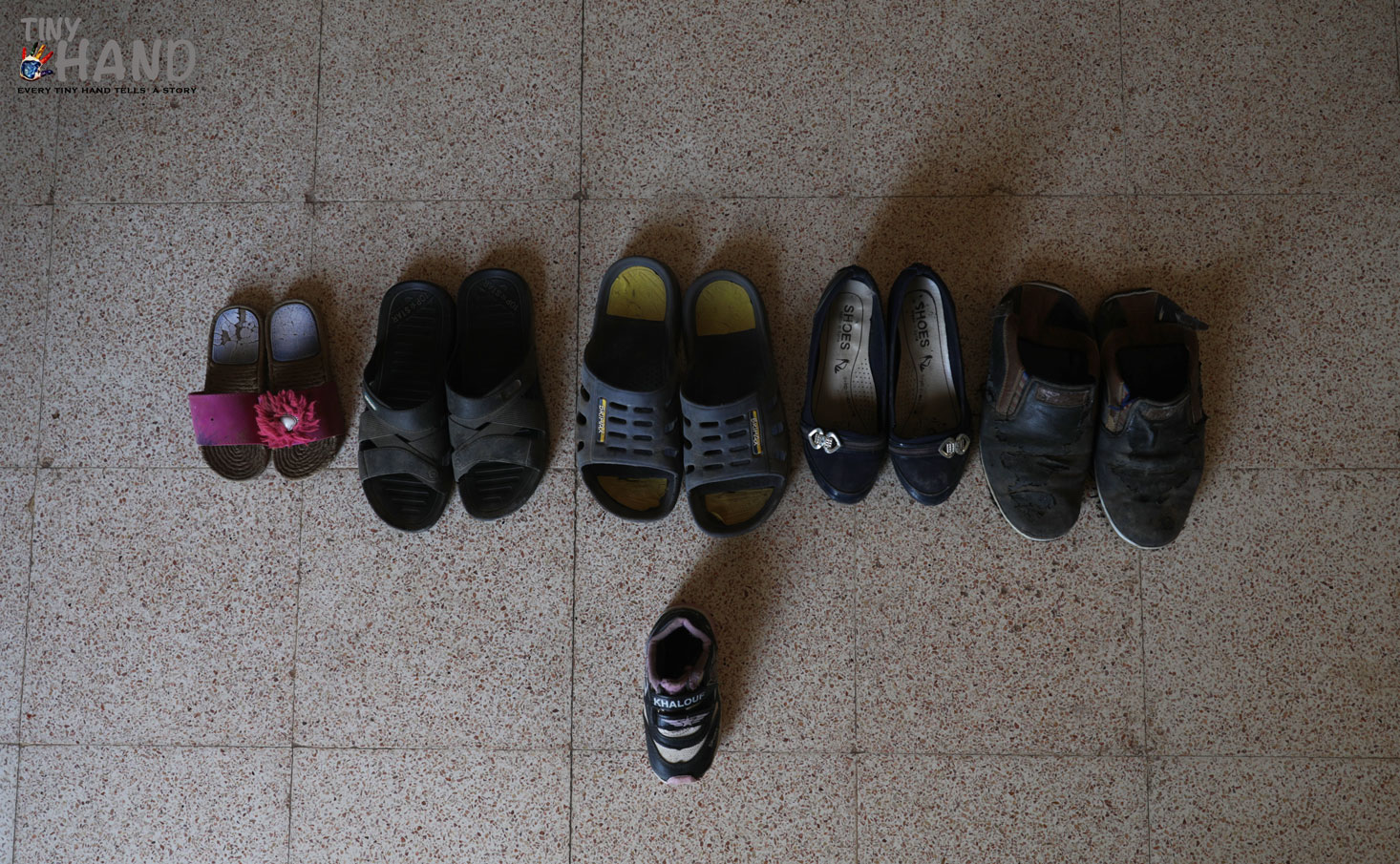 Mohammed’s family also had its life upended after his foot was amputated. “Our lives have changed drastically after the incident,” said the father sadly, “Before, Mohammed was living as if he was in a vast forest where he moved as he wanted. Now, he is like a bird trapped in his cage.” 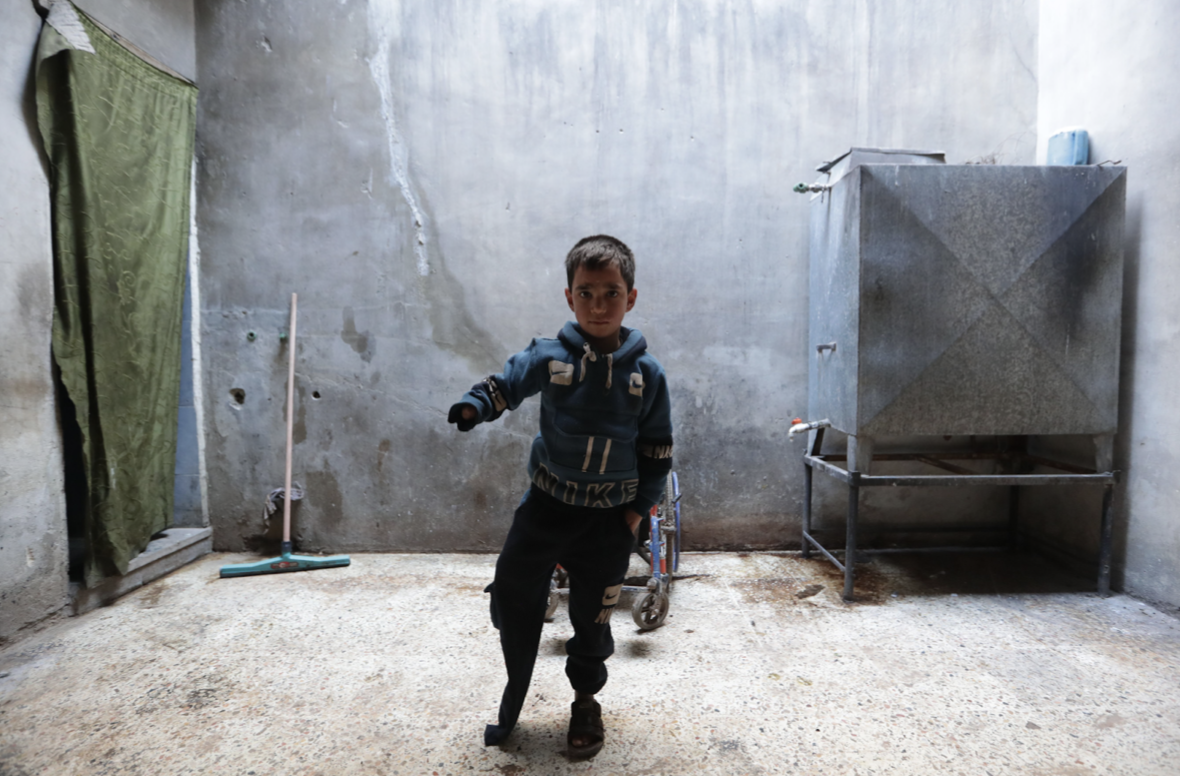 In their comments on the victims of the Syrian war, world health officials indicate a difficult reality for the injured in the country. In a statement, Mevlut Yurtseven, Former President of the Alliance of International Doctors (AID), said that “the incidence of lower limb injuries and amputations in Syria is the largest in the world since World War II.”

Lana, a five-year-old girl, is one of those Yurtseven talked about. She was a year old when the missile hit her house and injured her. That attack forced her to spend the rest of her life relying on a prosthetic limb after her leg was amputated.

Lana has not yet gone to school. Her mother does not hide her concern about the future of the child, who receives double care at home due to her injury.

Little by little, Lana began to adapt to her life with the prosthetic limb. She even started running while wearing it.

Lana’s situation is similar to that of Abdul-Rahman, who is now 5 years old. The child was near his house when a fighter aircraft fired its missiles at the neighborhood.

In adult-like expressions, the child described what had happened to him. “I was next to my house when the rocket bombed us. I was taken to the hospital, and there my foot was amputated. Then, I went back home,” he said, “This is my story.”

Before the attack, Abdul-Rahman was having some candies. Now, he spends his life with a prosthetic limb.

It is true that these prosthetic limbs soften the blow of the tragedy these children have been forced to live through, yet they cannot, in the end, quell the enormous sadness and grief in their hearts.