Reuters chose “this kick” one of the iconic photos of the decade, but where is Zaid today? 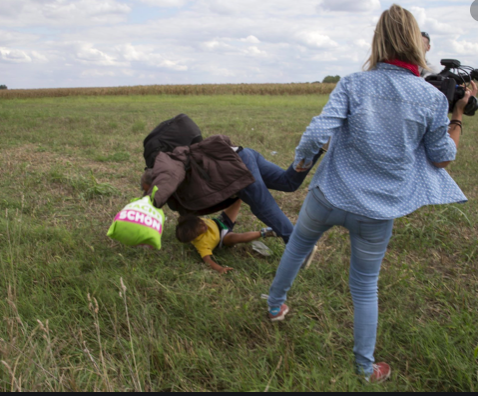 In one hand, he carried a green plastic bag and in the other, he held his child and started running away.

After a few minutes, he found himself falling over! At that moment, he was only concerned about his child, Zaid. “How will I fall on the ground and avoid hitting him? How to keep him safe,? the father told Tiny Hand.

Although this incident took place five years ago. The child’s father narrates it as if it has just occurred today.

At that time, Zaid was six years old. A Syrian child seeking asylum with his father, an adventure that was not without risks. It was even exceptionally riskier as they had to cross the Hungary-Serbia border but they were intercepted by a Hungarian camerawoman who tried to prevent them from doing so by kicking them with her foot!

Many people documented the kicking scene and the footage went viral on social media sites and the photos of Zaid and his father falling over spread quickly and widely among internet users.

Recently, Reuters chose their photo as one of the best photos in the decade.

Osama, Zaid’s father, did not know that Reuters chose their photo. On seeing it, he told us, “That means a lot to us because it has become a symbol.”

“But the most important of all,” he says, “is that this is translated into real actions and love prevail among people.”  Osama went on to say, “We should treat each in a purely human way, without having any feelings of hatred for a person that we do not know, just because he is coming from a different country or a different background as what happened with Zaid in Spain, for example. His school there helped him immensely and let him engage with other the students as if he were one of them and he became able to speak Spanish.”

However, the fame must have some troubles and some people tried to exploit their situation to achieve personal advantages.

The football that has disappeared!

After the photo of the “camerawoman’s kicking us” went viral, many sympathized with Zaid, led by Real Madrid C.F., especially Florentino Perez, the president of the club, according to Zaid’s father.

However, this was not a problem. The director of that organization took a ball signed by the Real Madrid team stars and given to Zaid as a gift and then he disappeared along with the ball.

Osama recalls, “The director of the organization promised us that he will offer the ball in an auction in Paris for sale. However, he never called back and the ball has just disappeared.”

This made Zaid deeply sad, especially that he “refused to give out the ball in the beginning because it was a memorial gift from Real Madrid club.”

Perhaps what happened to them later made the shock of the ball disappearance less in effect. Two years ago, specifically in 2018, the Hungarian Supreme Court acquitted Hungarian journalist Petra László, after assaulting Zaid and his father, a decision that was very painful for Osama, who avoided discussing the incident with his child all these years.

The father’s contract with the Spanish football club Getafe ended and he returned with his son to Turkey.  “The conditions were very difficult,” Osama says.

Zaid continues his education in one of the Turkish schools, setting his sights on becoming a football player to become famous, but this time with his foot kicking a ball into the opponent team’s goal, and not for a kick by someone who tried to prevent him from escaping death.