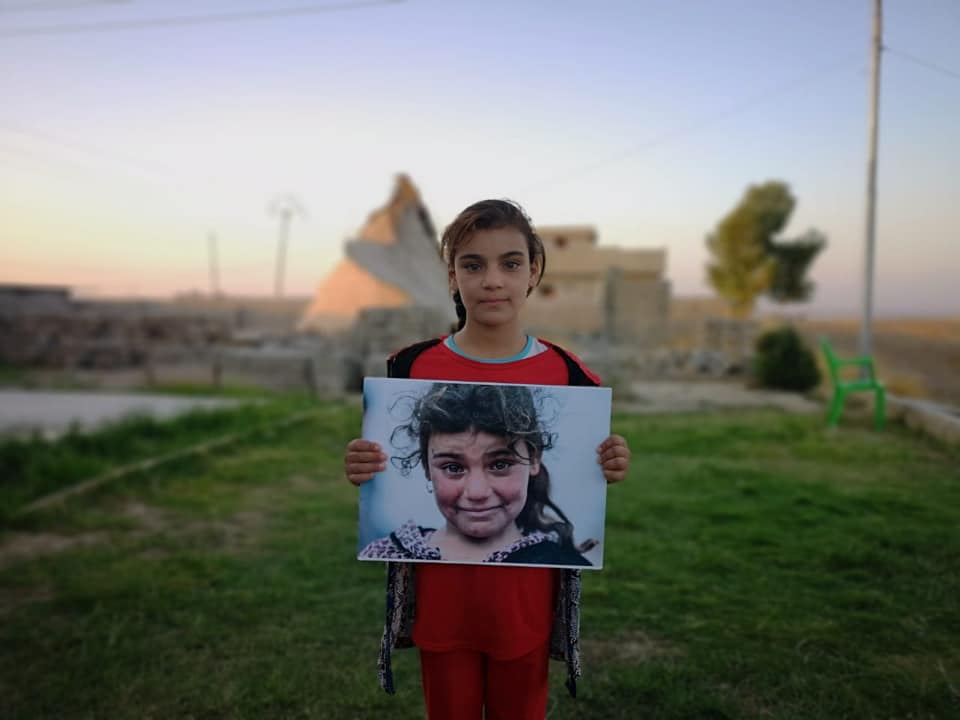 Three years separate two photos taken by the Iraqi photographer Ali Alfahdawi of an Iraqi child named Saba. The first photo was taken in March 2016 and the other at the beginning of 2020.

It was tremendously hard for the Iraqi photographer who kept remembering that girl who was crying and smiling while fleeing her city, Mosul, which was at that time under the control of ISIS.

Meeting Saba for the First Time

In the morning of one day in March 2016, Ali was carried his camera accompanied by the front lines of the Iraqi forces during the attack on the village of Badush, near Mosul.

Ali, who covered all the wars that took place in Iraq, was taking photos to document all what was happening on ground, “particularly the humanitarian situation”. Ali told Tiny Hand that at that time, a call from the Iraqi forces came saying that there were escaping families coming towards them from the ISIS-controlled area, including the girl Saba.

“I was watching the faces of the children who were running away out of fear of ISIS when this girl caught my attention,” Ali narrated.

Horror was clear in her eyes and despite the tears dropping on her face, she smiled at Ali’s camera. Back then, Ali was working for Reuters.

That photo went viral and everybody agreed on naming it “the Mona Lisa of Mosul”. Ali did not expect the photo to reach this level of popularity, or as he put it, “people will forget it after a few days of its spreading; and thus, the photo would vanish when the event is forgotten.” However, the photo kept spreading everywhere on social media platforms.

A lot of people were asking Ali questions about the fate of this girl and her address; and above all, whether she was still alive or not!

All such questions prompted Ali to search for the girl again and that took nearly 3 years.

Ali and Saba meet by coincidence

Over the past few years, Ali has visited the refugee camps hosting the families who ran away from Mosul carrying with him Saba’s photo and trying to find her. However, no one has ever seen or heard of her.

The two finally meet by coincidence. He was able to meet her again through a photo of her posted on Facebook. Luckily, the same photo taken by Ali was posted by Saba’s uncle on his personal page. “I asked her uncle, ‘Do you know where she is?’ He replied, ‘Yes’,” Ali narrated. The girl returned home after spending years in a refugee camp in Erbil.

Ali drove immediately from Baghdad to Mosul which is approximately 450 kms away, and eventually his dream of meeting her again came true. “I was extremely happy that she was still alive,” Ali told Tiny Hand.

Saba went back to her home in Mosul with her family, but the situation was not good at all as her house was demolished and her father lost the sense of hearing because of a shell that fell on their house.

“Did you see the photo of Saba?”, a question posed by the Iraqi photographer to Saba’s family who really came across her photo on the cars of the various humanitarian agencies that were helping the displaced people.

“I felt proud to see her family reacting to seeing the photo. It is a photo that depicts all the pain and displacement the Iraqi families had suffered. In short, Saba represents a great human message narrating the story of war and injustice,” Ali added.