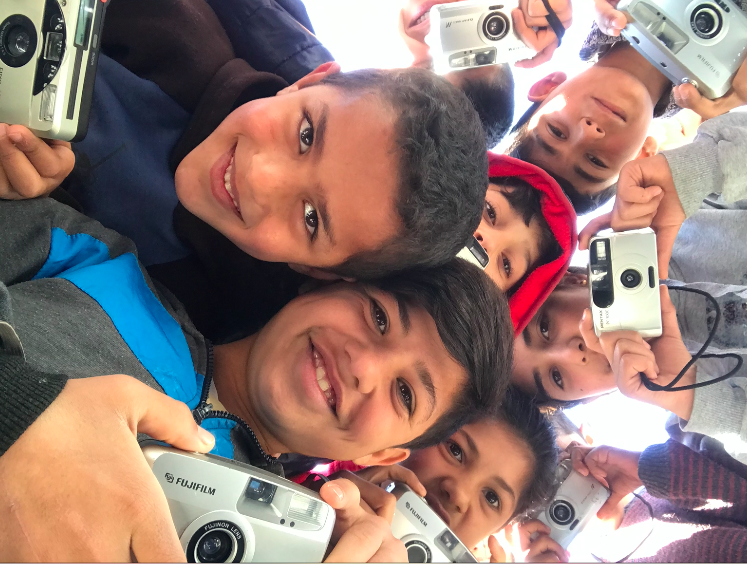 Usually, hearts are what guide children to see the world. Such a world has captured the imagination of the photographer, Serbest Salih, who seeks to discover the world along with the displaced, miserable and poor children. This is to be achieved through a project launched by Salih which only requires a camera and great passion, an appropriate opportunity he found with some displaced Syrian children.

The project of “Sirkhan Darkroom” is directed by Salih through the use of film cameras where he takes photos with children and then, processes them. Salih, who was displaced from his hometown Kobane in the northeast of Aleppo, knows exactly what these children experience throughout their displacement journey as clearly shown in the photos that he takes with them.

Actually, what makes Salih’s project different and unique is the idea of “the darkroom” along with processing the photos taken with children. “If you want to teach children photography, then you have already chosen to make them act like photographers and this requires beginning from scratch and using film cameras,” said Salih to Tiny Hand.

“This kind of photography allows children to learn how to accurately take photos because it has a specific number of rolls of films. Accordingly, children need to resort to their imagination while using this type of cameras,” clarified Salih.

In order to succeed in achieving his goal, Salih works with a small number of children – nearly 8 children in every workshop- where these children unleash their creativity and imagination while moving between the tents in which they reside near the Turkish-Syrian borders.

Every month, he holds workshops involving approximately 40 children from both Syria and Iraq.

In fact, initial work with humanitarian organizations was the starting point of this project according to Salih who said, “I work and live in the city of Mardin, in the southeast of Turkey. In this city, I’ve heard of the Art Anywhere Association, for which I decided to volunteer and work.”

And as for the continuity of this project, Salih depends on special charities provided by some individuals, some of whom support him with second-hand photographic tools that are no longer useful for them. In addition, the perseverance and passion seen through children’s eyes make Salih enthusiastic to continue working. “What really inspires me is seeing how children employ the pictorial photography, their ability to express themselves before the whole world and the happiness shown in their eyes after processing their photos,” added Salih.

As a matter of fact, Salih hopes to be able to reach all children across the globe; and to make this dream come true, he attempts every day to organize what he calls “the Caravan Darkroom” which he targets all children and the weak, in his terms.

Salih’s ultimate message of his project goes as follows:

Using photography as a special language for children to express themselves enables them to see the world by their hearts and capture it by their eyes.

The photos of these practical workshops could be followed up on social media platforms launched by Salih “Sirkhanedarkroom#”.