From Tent to Homes: The Day Syrian Children Moved To Their Newly-Built Homes 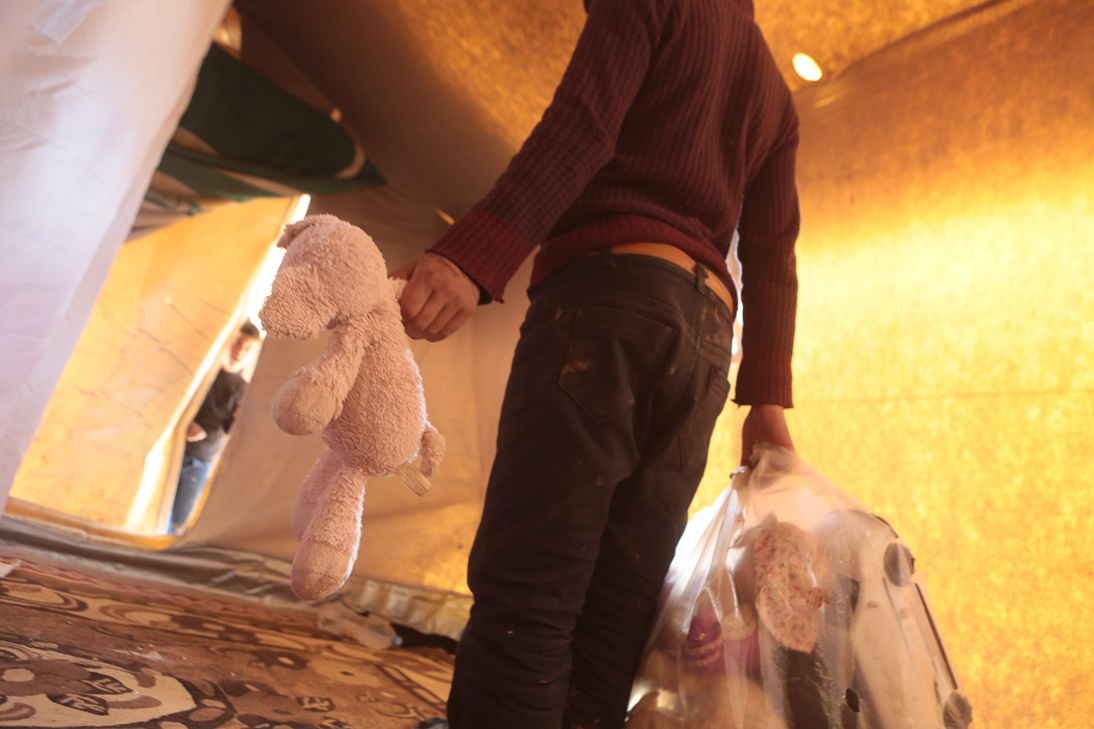 Everything seems different this morning; the expressions on people’s faces, their concerns, and their feeling of the breeze that moves the leaves. Today is the time for their suffering to end; the time for tears to disappear and be replaced with smiles.

Today is the time to leave. Leaving is always associated with sadness, but on this occasion leaving means happiness, a long-awaited moment, and for which many have suffered the harshness of life and living under the roof of a merciless tent where children spent their days crying out of cold winters and hot summers.

After today, neither rain will be a burden nor snow be a nightmare. Family members will gather in one room. Everyone will sleep assured that they will not wake up with their clothes soaked with water, or have their tent fallen on them due to strong winds.

Today is a joyful one for Bayan, Aisha, Ismael, and many other children in northern Syria who will move from the miserable displacement tents into built homes that give them hope for life.

The new homes were built by the “Molham Team”, a voluntary team founded by dedicated Syrian students in 2012. The project was achieved by the team’s “Until the Last Tent” campaign to collect donations to end the nightmare of living in the camps and move the displaced to homes that meet the basics of life, with heating systems, electricity, furniture, and most importantly, a door that protects the privacy of these families.

Bayan, a little girl, is one of those who bid the tent a farewell for good. In her last hours in their tent, she drew a seemingly eternal smile on her face. She was busy, in a race against the clock, packing her and her family’s belongings in large white bags.

Bayan rushed back and forth between the tent and the car that would carry her belongings to their new home. Every time she entered the tent to take their things, her smile got brighter, for this tent would no longer be her home. 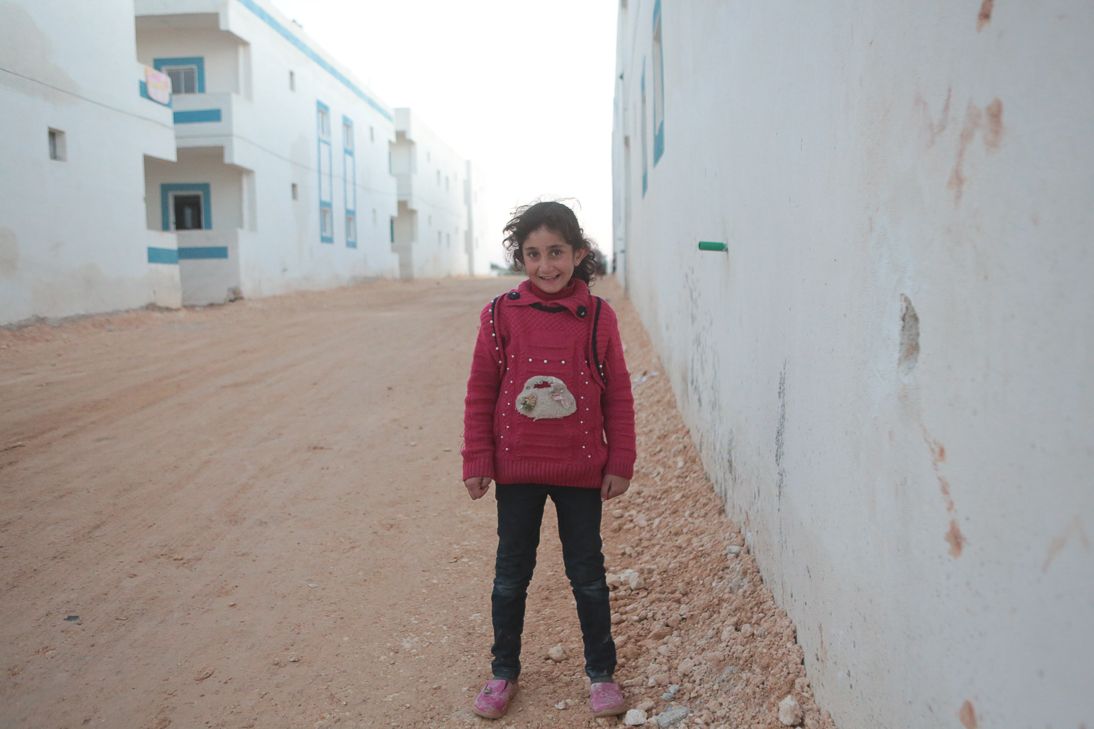 As the little girl and her family finished packing, it was time to move on to a whole new life. They all bid their tent a farewell, with a look that brought them back memories of their muddy clothes, the sleepless nights when their tent could not withstand the strong winds.

“Let’s go!” shouted the man who was to take the family out of the camp. The family was impatient and eager to get to the new home.

We accompanied Bayan’s family on their way to the new place. We arrived and hearts were beating with joy. Bayan and her siblings entered and ran around the house exploring its rooms.

Sitting by a fireplace, Bayan said she feels happy moving to a new house. For her, the most important thing is that her suffering with the rainwater that used to flood their tent and ruin their life had come to an end.

With a big smile, she talks about how warm she feels at home, and how she got rid of the mud that always made her clothes dirty.

Bayan spends her time happily with her siblings. They gather with a mobile phone in hand and laugh watching children’s videos. They play around the house joyfully, knowing that they will sleep peacefully at the end of the day. 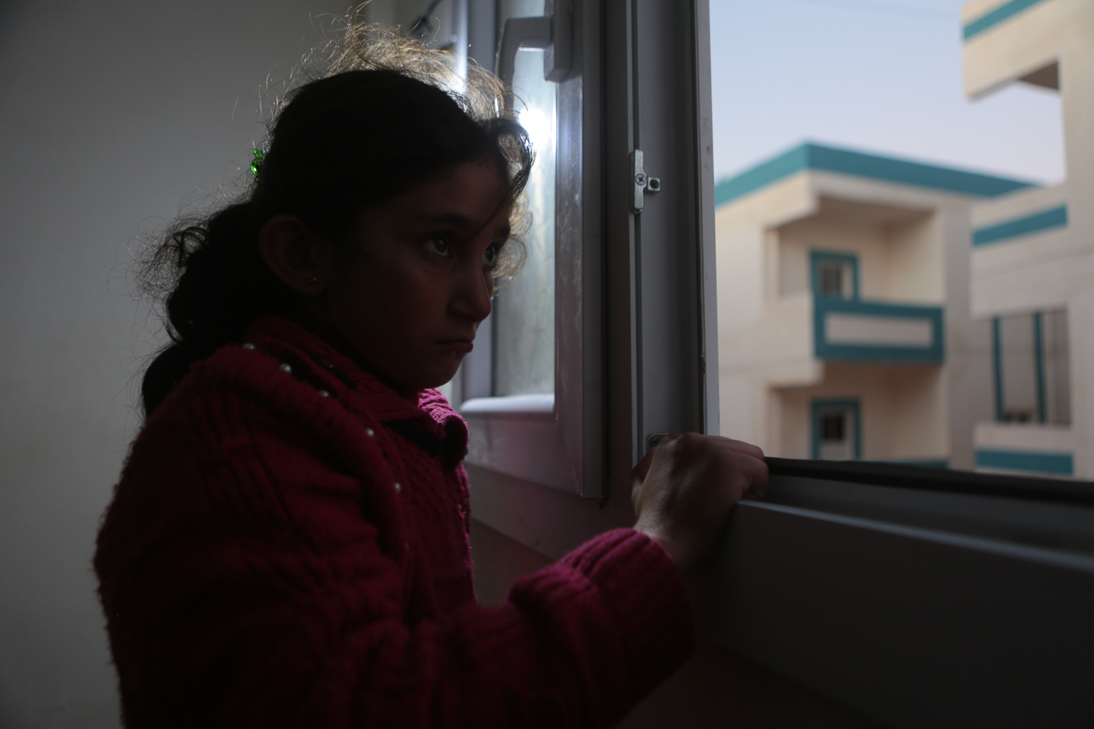 In a nearby house, Aisha, a 10-yeard old girl, turned a miserable page of a two-year life in a tent.

Upon visiting Aisha’s tent, she was also busy packing her things. She sat tired of working. “What makes me most happy is getting rid of the long-distance I need to travel daily to go to school,” she told Tiny Hand, noting that she walks kilometers every day for the sake of education.

Aisha used to feel desperate over her clothes’ getting dirty because of the mud that collects after the rain and snowfall. “I hate the tent,” she said boldly, “I never felt safe inside. I knew no happiness inside neither in summer nor in winter.” 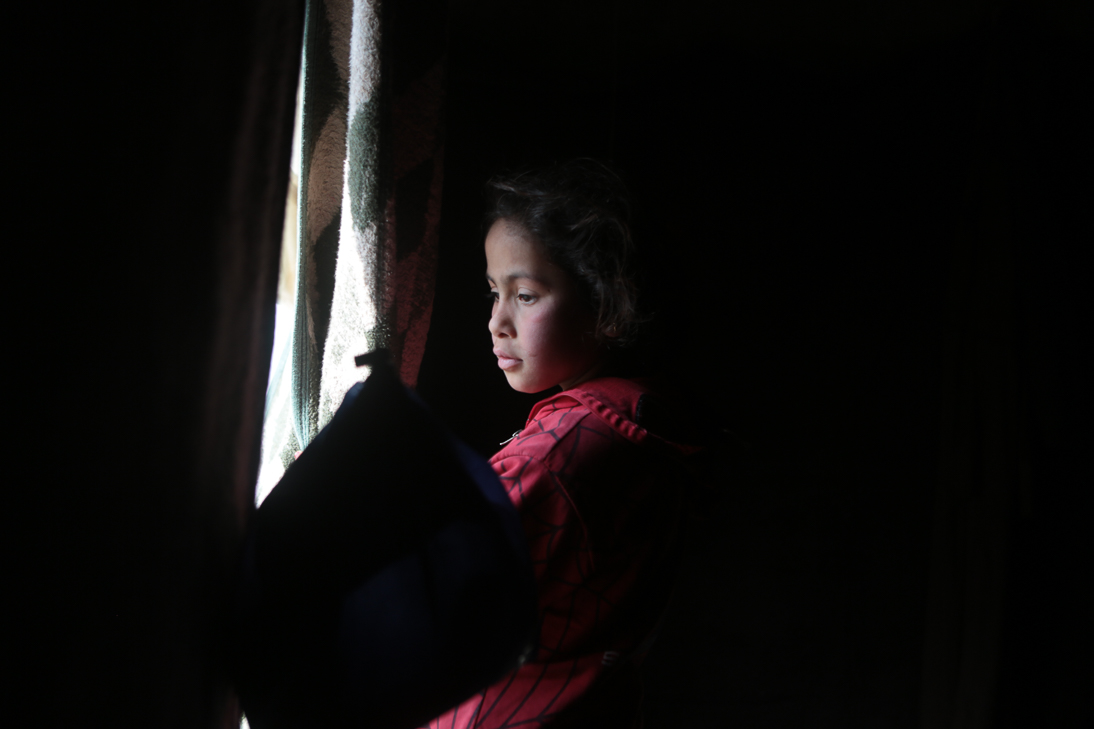 Now, Aisha enjoys her time lying on the mattress in their new house’s living room. She takes care of her hair more often. She switches on her mobile phone’s camera, looks at the screen with a smile, and combs her hair.

Moreover, if Aisha needs to entertain herself, she would now go out, walks around her new residential neighborhood, and returns to her house with clean clothes.

Aisha’s little sister is also happy at home. She follows her sister wherever she goes, rests her head on Aisha’s shoulder, and spends their time in their warm room playing and having fun. 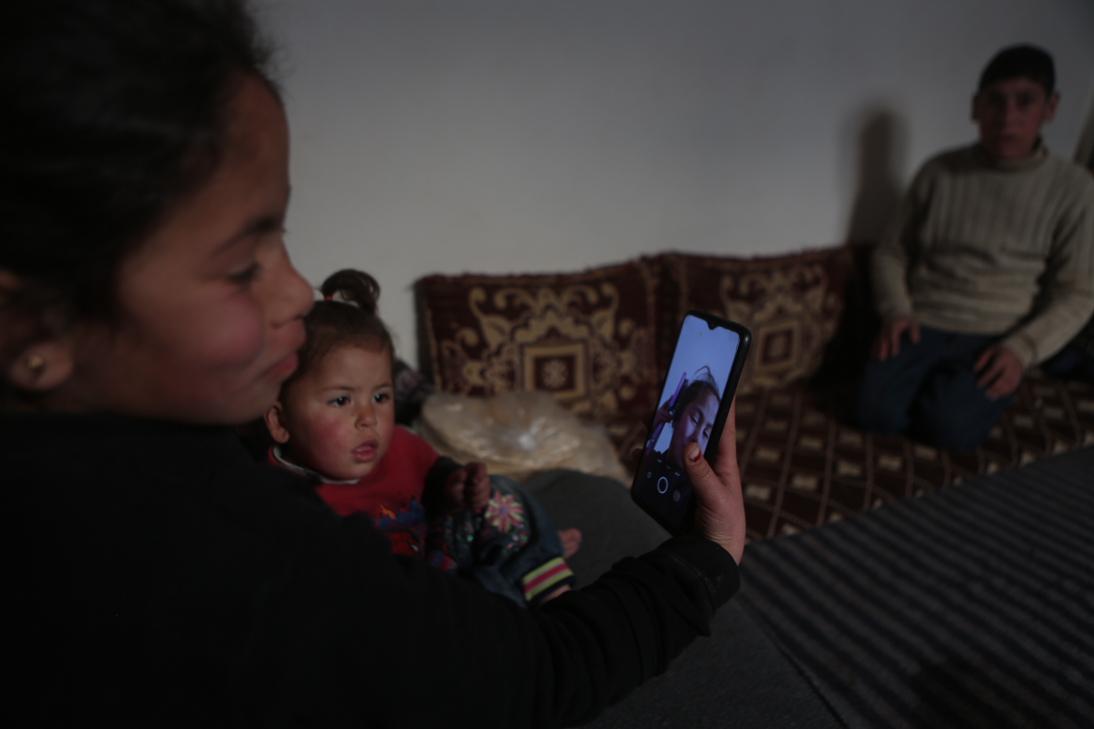 In another tent, while the residents were packing to leave, Ismael, a 10-year old boy, sat on a worn-out rug and put some food on it to have his last breakfast in the tent. He was eating in a hurry before he got busy packing his belongings to move to a new house.

Ismael suffered a lot in his life in that tent. “It was difficult to live in a cloth tent where life seems tasteless,” he told Tiny Hand.

The strong wind had always frightened Ismael while in the tent. He was afraid of rain and snow for they meant nothing but a source of misery for him and his family.

In his new house, everything seems different. Now, Ismael can stand on the balcony and watch the rain without fear. He also goes out to play with his new neighborhood’s residents.

In his living room, Ismael feels happy to finally live in a house with walls. “We have a house,” he said with a smile, “In our new house, my sister and I will be able to play indoors.”

Nearby, Ismael’s mother and siblings were busy arranging their new place. His siblings would go up and down the building stairs over and over again, laughing. 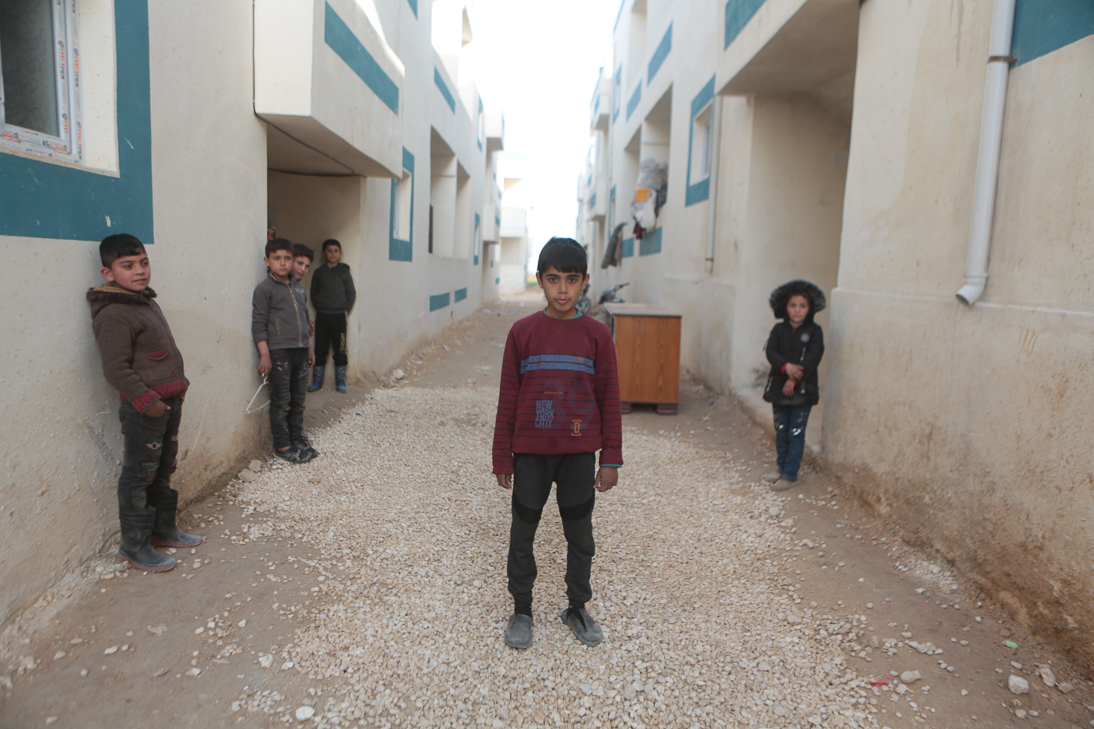 While Bayan, Aisha, and Ismael enjoy living in their new homes, a nearby house was waiting for its owners who still live in the tent.

Tens of thousands of children, who live in the 1,300 camps in northern Syria, hope that one day they will lead a new normal life like that Bayan, Aisha and Ismael enjoy in their new homes.

According to the United Nations, there are over 1.6 million people in northern Syria living in random makeshift camps that lack the basics of life.