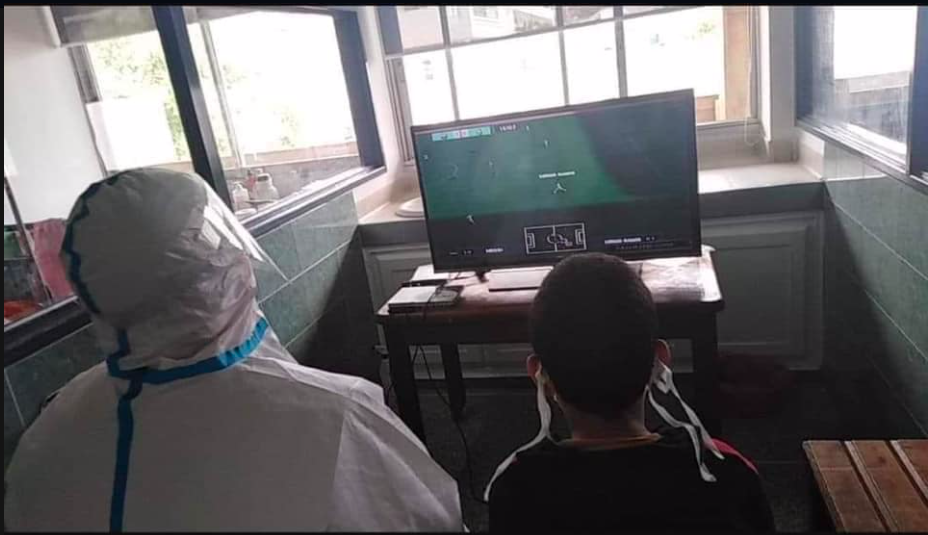 Each day, I see the wandering gazes and the confused looks on their faces asking about the identity of the person hiding behind the medical gown and the protective goggles whenever I approach them.  I thought about allocating a gaming hall in the suite of the children infected with the COVID-19,” the Moroccan nurse Yasin Al-Nahami, 27 years old, told Tiny Hand.

Yasin’s photo while playing games with a Moroccan child infected with the COVID-19 in quarantine at the Children’s Center of Ibn Sina University Hospital, located in the capital city of Rabat, has gone viral on social networking sites.

Yasin who is in touch with the relatives of around 20 children aging 3-13 years did not hesitate to submit a request to the director of Ibn Sina University Hospital to allocate a gaming hall in the children quarantine suite. Yasin’s request was accepted and the hall has been successfully prepared for the same purpose.

“I bought two TV screens, PlayStation games, pens, drawing papers, and colored dough for young children,” he said. “This has filled their small hearts with joy and drew wide smiles on their faces,” noted Yasin

Yasin was keen to stress that the money paid for the supplies and toys of the gaming hall was not his but were rather from the fund of “the First Step Association” he chairs. The money was raised to be spent on children with feet deformations but the quarantine prevented its spending. Therefore, Yasin decided to use it for the benefit of COVID-19 patient children.

The pain of vague reality alleviated by playing

Yasin could not bear the wondering looks directed at him whenever he approached these children. “My colleagues and I are more similar to astronauts than nurses. These children do not know our identities and cannot see our faces and expressions.”

This unknown environment experienced by the children infected with the coronavirus in addition to not knowing what exactly happens to them, after they were taken by surprise to the hospital, away from their parents and without sufficient knowledge about the reasons for their isolation, have prompted the young nurse to act positively towards these children

For the nurse who has taken this initiative, playing and drawing have a positive effect on children, their immunity, and their psychological state, which would help them recover better and faster.

The young children gather inside the hall designated for play activities on the floor. For their part, nurses make sure they leave the games aside and focus on treatment when doctors visit the patients 4 to 5 times a day.

Yasin Al-Nahami insists that his initiative was a culmination of the tremendous efforts made by the hospital’s healthcare staff, pointing out that the children infected with the coronavirus enjoy special treatment and medical care at the highest level.

Yasin Al-Nahami tells Tiny Hand about the atmosphere inside the hall, saying, “Despite the illness, it is not so bad for the infected children; the place is filled with childish delight, beautiful riots, and innocent laughter, so the children can have a lot of fun and feel more comfort.”

The photo that has gone viral on the internet of a Moroccan playing with one of the children infected with the coronavirus is not an accident. Yasin allocates part of his time for playing with patient children. “After I finish my follow-up of the children, I keep playing and talking with them for half an hour or 45 minutes,” added Yasin.

Yasin considers that this extra time lies at the heart of the positive treatment morale-boosting, which will enable the children to recover quickly. It is an opportunity for the young children to get to know Yasin, joke with him, and ask him to evaluate their drawings.

Amidst an atmosphere filled with joy and positive sentiment, hope must prevail, 3 out of 20 children have recovered and left the hospital, while two others are preparing to leave soon.

What does it mean to live 360 days in a place having neither schools nor markets — literally nothing except dust, dirt, and of course, tents?…