When a child becomes a star in social media: Relief Organizations and Humanitarian Aid to Only One Child 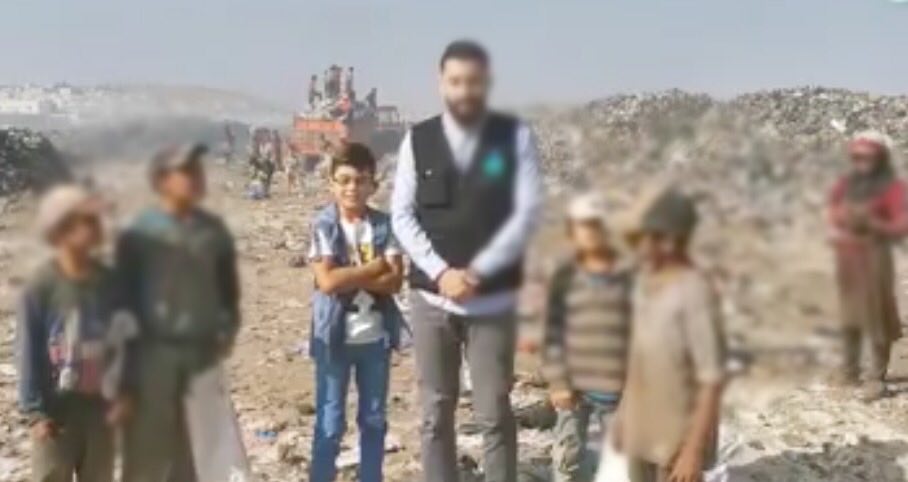 A year ago, and more particularly in March 2019, a relief organization recorded a video of the Syrian girl, Abeer Al-Muhammad, in which she spoke about her displacement with her family. Sadly, that video caused the murder of Abeer and one of her brothers later on.

In fact, the details and events narrated by Abeer stirred up the feelings and sympathy of millions worldwide, especially because she was fatherless. Besides, she was looking after her paralyzed mother along with her two little brothers, one of whom was with special needs.

Unfortunately, the whole family was displaced from their hometown, Palmyra, and ended up in a camp in northern Idlib.

In addition to the widespread sympathy she received, Abeer was financially aided with more than $10,000. This piece of news rapidly spread and was shared on social media by Abeer’s relatives who, later on, slaughtered her and her little brother, stole the money, and reported the crime to the police.

However, the criminals did not expect Abeer’s disabled brother to have witnessed the crime. During the funeral of the girl and her little brother, the brother with special needs revealed the truth by revealing the murderers’ identities.

After the murder of Abeer and her little brother, harsh criticism was directed to the entities which provided the financial aid because they publicly stated the actual amount of donation, which in turn, jeopardized her life and led to her death in this way.

According to Communication and Advocacy Manager at Hurras Network, Layla Hasso, the victims’ family could sue the entity responsible for disseminating information about Abeer. Additionally, Hasso told Tiny Hand that “the provision of services to the beneficiaries should be made with the provider pledging to maintain the secrecy of beneficiaries’ information, even if the receivers agree on the dissemination of their information. For that reason, the organization should identify the potential dangers that may be caused after releasing videos, photos or even information”.

Hasso further assured that what happened with Abeer was “a clear violation committed by the organization.”

As a matter of fact, Abeer was not the only person who, overnight, was turned into a social media star, and thus, the aid granted to her transformed into a curse!

In Syria, there are currently numerous local, humanitarian organizations competing with each other to receive financial support for their projects, even if that is at the expense of children and their rights or even if this means violating the principles enshrined in the United Nations Charter.

As stipulated by one of these principles, children receiving aid reserve the right not to be captured while being granted the donation. This is because this is considered a violation of child’s privacy and interest for the sake of safeguarding providers’ interests.

An example of such cases is the Syrian child, Hussein, whose story began when he was filmed by an activist who asked him about what he was doing. At that moment, the child talked about his miserable living conditions and humiliating job of collecting plastic boxes and nylon bags to sell them in exchange for half a dollar daily — a sum by which he could hardly afford to buy bread for his family.

During that period, the video spread widely to the extent that most mass media reported it. In addition, several relief organizations contacted him to offer the provision of help and care to him and his family.

What’s more, various photos and videos of Hussein with officials from the donor organizations standing next to the provided aid started to go viral ever since. Nonetheless, such photos and videos were criticized by the Syrian actor, Abdul-Hakim Kutaifan, who posted the following comment on his personal social account: “I did not understand such feverish interest in sending aids and providing services only to the family of Hussein, while at the same time, there are thousands of poor and miserable children who are left without any help or care!”

Mr. Kutaifan ended his post saying, “To the honorable relief teams! I hope you offer actual help for all the needy, rather than only showing off!”

Kutaifan’s post shows conformity with UNICEF’s statistics indicating that there are 1.2 million Syrian children who are in pressing need and suffer from a serious shortage of food, water, and medicine.

As for Hussein, the photos published while being handed aids were not everything. This is because the treatment he received violated an essential principle of protecting children, according to the United Nations Charter, namely asking him to publicly appear with the aid.

The child was captured receiving new clothes and eventually standing among his friends who were searching in rubbish for plastic products to collect to be able to buy food.

In the video, Hussein appears wearing new clothes, while his friends are in torn clothes looking at all the cameras and hoping that they, too, could become social media stars to improve their poor conditions.

“But what will happen when Hussein grows up and sees these photos and videos?” wondered Layla Hasso. She further added, “What will happen when such a child goes to school after being known for collecting rubbish? Won’t he be bullied by other students?”

“I have a crystal-clear piece of advice. First of all, the child needs to feel confidence and pride. Second, he or she must not be involved in an embarrassing situation where he or she is hurt and humiliated by those around. Third, causing psychological and emotional harm to other children while filming a child must be carefully avoided”.

According to Hasso, maintaining secrecy and privacy of a child’s information is extremely crucial. Therefore, if a donor organization chooses to show the face of a child to the public, his or her full name and address must be kept confidential as “this procedure decreases the chances of identifying the accurate location of the child. This reduces the potential dangers.” In saying so, Layla draws attention to a significant point related to filming the Syrian child, Hussein, by saying, “the entity that filmed Hussein could have just captured him happy and proud without providing full description of his condition and taking him back again to his disgraceful workplace.”

“Based on that, any entity involved in the domain of relief work should examine the potential dangers that might be faced as a result of filming a child and get approval from the child, his or her family, and all children appearing in the video before filming.

In addition, the entity should explain all the potential risk that may occur as a result of sharing their information publicly,” added Layla.

Finally, the Communication and Advocacy Manager at Hurras Network concluded her speech saying, “all relief entities must not exploit the fame of any child for the sake of begging additional financial support from humanitarian organizations because this is considered an act of exploitation. The organization, instead of this, should focus on paying attention to the child’s status and ensure that the donated money will offer help in taking care of such cases.”

Hussein was not the only child who was brought back to his miserable workplace, so to speak. Like Hussein, many children are treated in such a similar manner just to “show off”. For instance, a relief organization resorted to filming how it improved the life of an orphan who was working in building houses after sponsoring him.

And to completely make the whole thing seems real, the child was taken again to his previous workplace to sit there and narrate the hardships he has gone through. Then, he compared it to his new life using a language that is even difficult for older people to either use or understand!

What about a Child who Used to Work in Digging Graves?

The story of Muhammad, a name that was made up for privacy issues, has been supported and aided by a global humanitarian organization and its local partner. Yet, after providing support, returning the child to school and opening a small shop for his father in order to help him make a living and stop sending his child to work in digging, the local organization took the child back again to the graveyard to capture the child while performing his former digging duties in order to document his story.

This story might cause “social isolation” for both the child and his family. According to the protection specialist in Hurras Network who spoke to Tiny Hand, “the lack of follow-up of these cases by organizations is more likely to expose the child to a great danger. This is because usually after providing a substantial quantity of aid and support during filming, the child’s family will suddenly find themselves in a very critical situation.”

Clarifying more, the specialist said that “community-provided aids they used to receive have cut off. On the other hand, the child could feel that he became a commodity because his family gained great fame when he was still a social media star, and thus, he might be blamed for his inability to earn money as he used to previously.”

According to a survey conducted by UNICEF, children in Syria are badly suffering due to the profound and negative impact of the ongoing war, especially those who were born during the war years. As it is estimated that there are 6 million Syrian children who know nothing but war. This indicates the massive impact of war on Syrians’ psychological health.

Furthermore, the survey shows that the psychological damage and its effect on psychological health are as dangerous as those of physical injuries.

Day by day, those fading dreams become more distant. No wonder, when we know that many Syrian children have become their families’ main breadwinners….