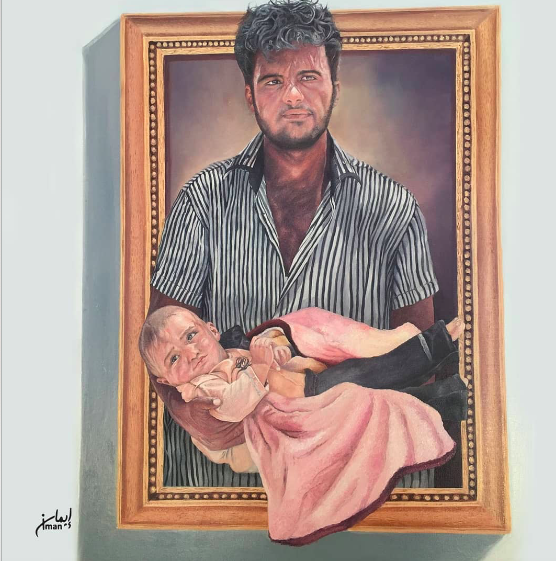 She had no moment of hesitation to choose it to be the theme of her graduation project. Omani artist Iman Sa’eed al Khatri put spotlight on the plight of Syrian refugees the sufferings of whom are depicted in pictures she encounters on a daily basis on social media. The pictures show refugees escaping from death in their country to the unknown.

It took two full months for her to find an answer to these two questions: “How am I going to draw the refugees?” How could I illustrate in colors the suffering of millions of Syrians fleeing war?”

“I tried to make my two artworks demonstrate the status of refugees because at the end, every artwork must deliver a message and fulfill an intended purpose,” Iman told Tiny Hand.

This is exactly the case with Al Khatri’s two paintings depicting refugee children. She worked on them for three months as part of her graduation project to graduate from Sultan Qaboos University.

Speaking in detail about her artworks, Iman said, “The two portraits reflect the conditions of refugees in their journey and in their search for a country where they can enjoy safety and stability.”

Iman further noted that her focus was on a Syrian refugee and his facial expressions which “reflect the sadness, pain, and tension he feels as he leaves from a frame carrying his child.” Appearing in his background are many other refugees “sinking in misery and sorrow due to the crises and conflicts they have been witnessing as a result of the outbreak of war in Syria,” she added.

“The frame in the artworks symbolizes the war-plagued homeland,” the Omani artist shared with Tiny Hand.

“The question remains, what is the fate waiting for these refugees? Will they find the life they dreamt of outside their country?” she narrated.

Although the characters in the portraits are the product of her imagination, she feels overwhelmingly attached to them. “The most important question,” she asked, “What is the value of a man without a homeland?”

Today, more than 2.5 million Syrian children are living as refugees in neighboring countries and over 6 million children were born since the start of the war in Syria in 2011, according to the UNICEF. This means that these children, including the one trying to escape from Al Khatri’s painting, know nothing but war.