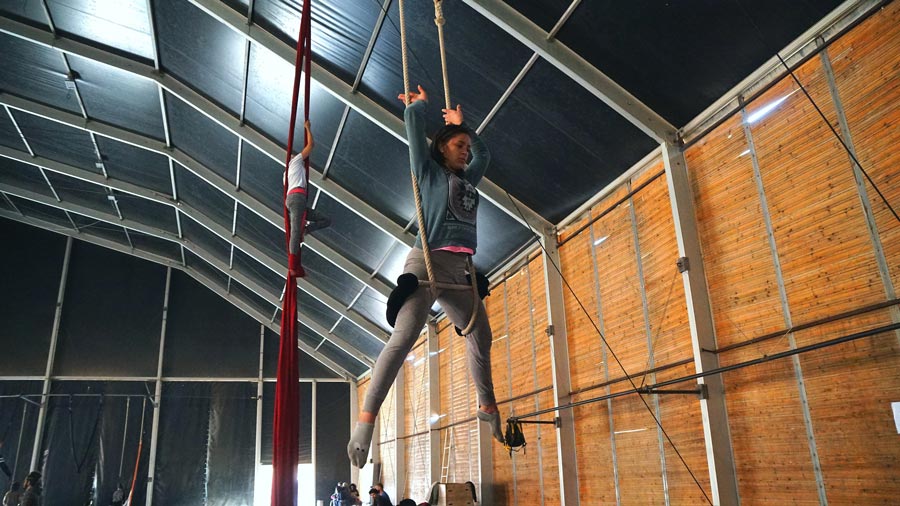 The girl’s thin body twisted around strong ropes with her legs gently entangled before she smoothly climbed the ropes.

She halted for a short while to listen to the instructions of her trainer who then announced the end of the class.

She lowered her feet to touch the ground. With her looks charged with confidence, the girl announced that this giant training tent which hosts tens of female and male learners is embracing her big dream of becoming a circus performer.

Only 3 months ago, 16-year-old Rania Denar had had no clear goal to seek for her future. But joining the National Circus School (Ecole Nationale de Cirque Shemsy) in the city of Salé has made a drastic change in her life and charged her with both hope and ambition to have a better future.

Rania came from the city of Fes, 194 kilometers away from Salé. She found what she had been looking for in this school which is the only one of its kind in Morocco and in the African continent, especially after dropping out of school before finishing her preparatory stage.

“I was not interested in study at all. I had spent months as a goalless person until I visited a center for circus arts in my city where I spent five months then I came to Salé to pass Cirque Shemsy’s tests,” Rania told Tiny Hand.

The girl needs to complete a four-year training program in this school, which overlooks the Atlantic Ocean, to be able to eventually obtain a diploma in this field and become a circus artist. This Moroccan circus school teaches students the fundamentals of the most established contemporary circus arts in the world.

“I feel how powerful I am when I train under this giant tent. And I dedicate all my time to practice and trainings under the supervision of my Moroccan and foreign coaches,” Rania said.

To practice circus arts was not that easy for Rania. This branch of art is perceived by the Moroccans as being associated with acrobatic arts. So, the girl had to face the challenge of her father’s rejection.

“My father found it difficult to accept that I move out of our home and live in a strange city in which I have no relatives or acquaintances. But he finally agreed reluctantly after some family members had convinced him,” Rania told Tiny Hand.

The father is still concerned, but she keeps trying to allay his fears. She persistently dispels the popular myth that dropped out girls are not good enough.

Rania dreams to become a stunning circus performer and to work jointly with prominent artists. “I will not look backward whatever is said to me. I shall remain strong and confident despite my young age,” she affirmed.

The way the Moroccan society looks upon circus arts is not the only obstacle circus students face. They also encounter financial and social challenges achieving their goals.

Due to the tough financial conditions of his family, 18-year-old Abdulmajeed Al-Daqqaq dropped out of school and started to learn some crafts. The only thing that could interrupt his hard times was joyfully gathering with his friends to jointly perform a hip-hob dance or breakdancing.

“I and my friends had used to practice dancing in streets and alleys before I passed the tests of Cirque Shemsy and joined it,” Abdulmajeed told Tiny Hand.

“When I informed my family that I desired to become a circus artist, they found it odd because this specialization is unusual. What made it worse was my family’s difficult financial situation which could not afford that I move to live in another city to practice this art,” he added.

Coming from the city of Meknes, 118 kilometers away from Salé, the talented boy received help and support from the circus school. He was offered free housing and meals. This help has made things easier for him and paved the way for the fulfilment of his dream.

“Cirque Shemsy saved me from the danger of hanging around in the streets after I had dropped out of school. Besides, arts in general can save adolescents and young people from falling victims to the claws of drug addiction and misconduct,” he noted.

With an optimistic smile, Abdulmajeed’s face expressed his ambition to follow in the footsteps of former artists who had studied in the same school and seek to be hired in an international circus in a European country.

The boy’s big dream is not limited to becoming an artist in an international circus. He also dreams to establish a circus school where he can teach children the circus arts, to develop their talents, and to help them invest their leisure time.