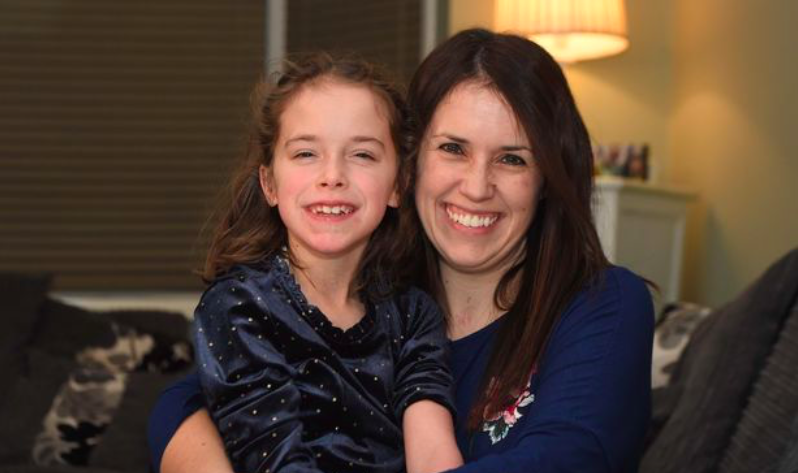 Little Esme Hayes will never be able to give her mum a loving kiss on the cheek or blow out the candles on her birthday cake.

For the youngster has a rare condition called Polymicrogyria (PMG) which affects the brain, causing problems with speech and the muscles in her face.

It means she cannot perform the simple action of a peck on the cheek or scrunch her lips together to blow.

And her mum Sinead believes it is down to the fact that she was struck down with swine flu when she was pregnant with Esme, nine years ago, leaving her in a coma.

Sinead was left fighting for her life in December 2010 when she was 12 weeks pregnant.

“When I left hospital after having Esme, I couldn’t sit up, or brush my teeth,” says the 39-year-old, from Sutton Coldfield.
“At the same time I was grieving for my dad.

“My husband John was very supportive but he had to go to work. I stayed with my mum a lot.”

At first, everything appeared to be OK, the Birmingham mum recalls.

“Esme seemed to be fine when she was born, and it wasn’t until her nine-month check that alarm bells started ringing,” she explains.

“She wasn’t able to sit up on her own and she kept her right hand in a fist.

“After various tests were done, it was confirmed she had PMG. They told us her brain had formed differently and instead of having deep folds, she had lots of folds in her brain, affecting her facial muscles.”

Esme has undergone tests to find out if the PMG was the result of genetic or other factors but they have come back blank.

There is no test to determine if it was a result of the swine flu, but Sinead and husband John are certain that is the case

“If a health professional I came into contact with had offered me the flu jab, things might well have been very different,” says Sinead, who is also mum to five-year-old Eloise.

“Esme would have been a healthy eight-year-old who would have gone to the local school, and been able to speak clearly.

“She would have been able to fling her arms around me, and give me a peck on the cheek