The bedroom turned into a lab: Child Amoy, the neurologist! 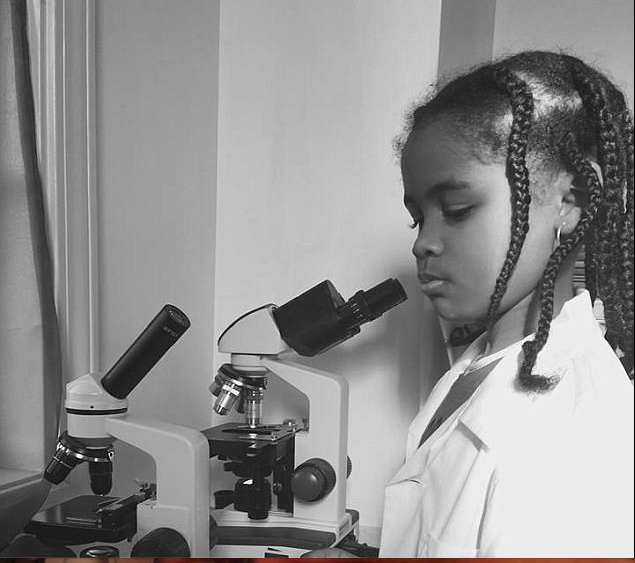 If you want to ask a child a question, you have to think well before you do that. But what if the child you’re going to ask is obsessed with science and knows several scientific terms with which you aren’t quite familiar.

This is exactly what happened when we interviewed the American child Amoy Shepherd who is nine years old. Therefore, we opted to simplify our questions.

The whole story started when Amoy, whom some nickname as the small neurologist, was given a present. She was three years old when her father bought her a microscope as a present.

It happened that the box did not include only a microscope but also some other lab equipment. “I wanted to have a place for all of what was in the box, so I decided to set up a lab in my room.  My grandmother would help to add equipment to the lab during the years,” Amoy told Tiny Hand.

The child had a smart plan for arranging her tiny lab; each year she keeps only the equipment she needs for her subject for the whole year and stores all the other equipment in the garage.

Now, what does Amoy use this lab for?

This child has discovered her interest in science, particularly neuroscience at a very young age. She explains why she has chosen this area saying, “What happens in the synapse shapes our entire human experience.” In addition, she enjoys studying neuroscience.

Amoy shares her experiments in videos she publishes on social media, and some of these videos were used by teachers to teach their students, which made her feel very grateful.

Amoy notes, “I feel grateful for it because I can connect  the dots to others in my own way.” These videos highlight the clear support Amoy receives from her father who once said that he supports his daughter in whatever field she chooses! Indeed, her father seems to have a huge impact on her.

When asked to talk about her strongest childhood memory, she recalled a documentary about Venus and Serena, particularly the statement made by the famous tennis player Venus about her father’s support for her, when he ensured that she didn’t have to second guess her confidence.  He believed in her, she believed in herself, that was all that mattered.

“I love my family, they are all the support I need,” added Amoy. Her family supports her in achieving her dream of becoming a neurosurgeon. The reason for such aspiration is that she wants to heal people with neurological disorders. She is looking forward to understanding the multiple sclerosis disease because her aunt has had it, and she wants to treat her.

The best advice she has ever got!

Amoy said, “The best advice I have been given is from my father.”  He tells me, “Never fear failure. It is just success disguised as an alternative route.”

Her message to the children around the world:

You don’t need to limit yourself to society’s timeline.  You can achieve your dreams at any age.

According to a report issued by UNESCO in 2017, less than 30% of the world’s researchers are women.

These huge differences were not coincidental, as many girls are less enthusiastic to study scientific subjects for many reasons, including the societal standards, the discrimination they face, and the other factors that affect the quality of girls’ education.

Perhaps one day, Amoy will be one of these female scientists and get awarded the prize!