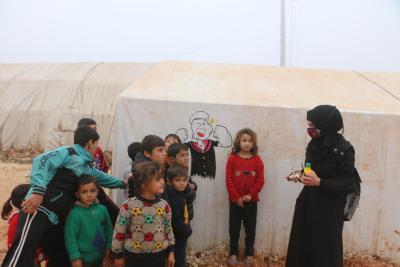 The moment she picked up her paintbrush and colors setting off to the Syrian camps near her home in Idlib, Amira Dani, a 19-year-old Syrian girl, did not forget that the majority of the displaced children know nothing but warfare.

According to the UNICEF, 5 million children were born during the war in Syria over about 10 years. However, that did not matter for Amira as she was only interested in making those children delighted through drawing cartoon characters on the tents in which they reside.

Most of them did not know those cartoon characters because they do not have TVs. The colored characters, however, have beautifully ornamented their tents.

“I’ve tried to choose the most famous cartoon characters to draw; but unfortunately, the majority of the children didn’t recognize them,” Amira told Tiny Hand.

Amira selected the characters of Tom & Jerry and Popeye to paint for now and she will also continue painting different characters believing that “all the imaginary characters are beautiful and make the little audience happy.”

Amira, who is also a refugee, was forced by the war conditions to leave her village “Kansafra” and move to Idlib. Her displacement experience made her feel deeply for these children, and that paved the way for her to achieve the project of painting cartoon characters on the tents.

“This idea came as a result of two things: the difficult conditions that children experience and her deprivation of watching cartoon programs due to power cuts. Therefore, she decided to bring a smile on the children’s faces, even for just few seconds,” Amira said.

Children used to race around the tent selected to be painted on by Amira, then they would watch her with excitement while she draws to try and guess which cartoon character is being painted.

“That great happiness appearing in their eyes after every painting made me cry,” she narrated.

Amira’s project faces countless obstacles, the first of which is that she is a “girl”, according to her. This creates a huge hurdle upon her movement between tents. The second obstacle is that “she has no fabric paints and tools suitable to tents. “For that reason, I look for the least dirty tents to paint on it,” Amira added.

Amira, who is studying in the Counselling Psychology Faculty, did not receive any lessons in painting, but developed her talent by herself through being a follower of the most world-renowned painters such as ”Da Vinci, Van Gogh and Frida Kahlo” because these artists adopt special painting techniques.

Although this girl chose the shattered tents on the outskirts of Idlib to share some of her art there, she dreams of establishing her own exhibition and visiting Paris. For her, the French capital is “the mother of beauty and the city from which her favorite cartoon character, which is “Lady Oscar”, appeared. There, she will bring out her best artistic talents since all what she needs will be available, particularly the special painting tools.”

Her dreams do not stop at this far as she aspires to become a famous visual artist to bring joy to everyone’s heart and help people through her psychology counselling background. She said, “I wish to own a clinic specialized in psychiatric disorders to help solve children’s problems.”

These children face many problems imposed by the war, the most serious of which nowadays are winter’s extreme cold, rain, and scarcity of food. All these matters disturb Amira who finds herself luckier than others as she has primitive heating facilities working on “peanut shells” in the house that her family rented in exchange for a huge amount of money.

Amira said she wishes “people who have the potentials to help children to do so!”

“My father and mother, who are the closest to my heart, have respected my decisions and supported me. They are the core essence of my life!” Amira concluded the interview.