“Stolen Childhood: The Victims of “Legalized” Child Marriage in the Arab World” 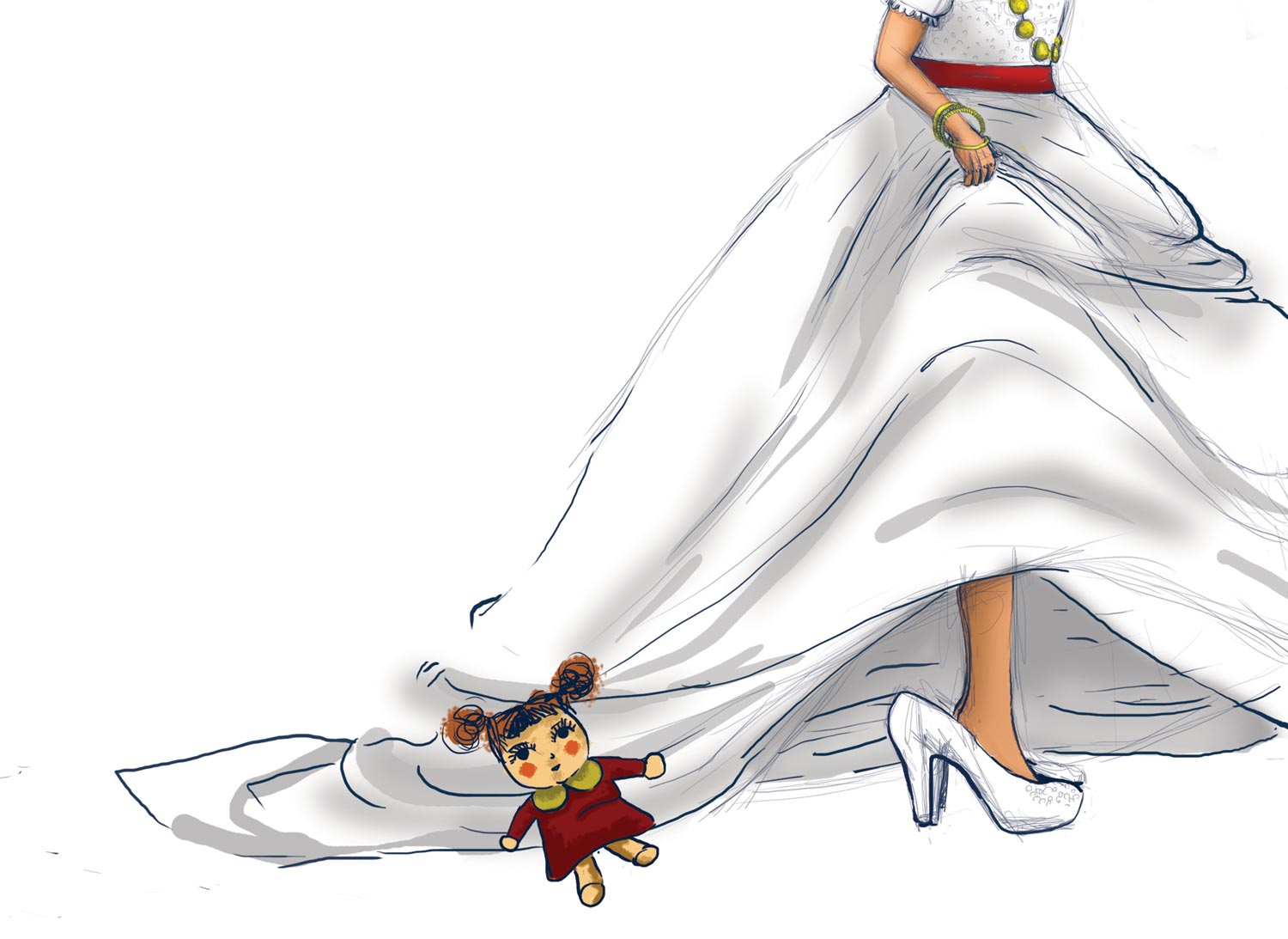 Feeling helpless with tears pouring down her face, an Iraqi mother held her mobile phone and went live addressing the audience on social media, begging everyone to help her in her ordeal. “Save my child!” she asked unknown people in a quavering voice mixed with tears.

According to this mother’s account in October, the childhood and dreams of her 12-year-old daughter were ended when the father decided to marry her off, ignoring the risks associated with girls’ early marriage.

The mother’s public call on social media and the following solidarity campaigns she achieved prompted the Iraqi Ministry of Interior to intervene. However, after investigation, officials concluded that “there was no problem, since the child’s marriage was done with her consent, and since both Shari’ah and civil law permit the marriage of a minor by proxy of her guardian (her father).”

The ordeal of this child is never unique, but rather an alarmingly recurrent scene in Arab countries, where many minors are robbed of their childhood without being noticed

Young girls, who are still drawing trees, rivers, and birds on their notebooks, find themselves all of the sudden facing the unknown with older men who want them to be their wives and have children.

According to the United Nations Children’s Fund (UNICEF), child marriage refers to any formal marriage or informal union between a child under the age of 18 and an adult or another child.

The UNICEF’s data indicates that one in every five girls in the Middle East marry before they turn 18, and this percentage increases in conflict zones.

Worldwide, 12 million girls marry before the age of 18 every year. If states did not take measures to stop this, by 2030, more than 150 million additional girls in the world will marry before they turn 18.

What Happens When Children Get Married

The marriage of underage girls represents a true end of their childhood, and the death of their dreams of life, study, success, and excellence

Yasmine had always dreamed of becoming a fashion designer. However, at the age of 16, she married a 24-year-old man, and her dream became unattainable when she found herself forced to become a mother at an early age

Yasmine, a Syrian refugee based in Jordan, told UNICEF representatives: I am five months pregnant now and sometimes I feel angry. I think the reason is the physical changes that affect my mood as well

Child marriage reduces the likelihood of girls to remain at school. Moreover, girls who marry before 18 are more vulnerable to experience domestic violence, in addition to the suffering from knowledge gap compared to their unmarried peers who were allowed to complete their education

There are several reasons behind child marriage, including the economic conditions that lead some families to accept marrying their young girls off to rich men

Customs and traditions also play a role in the spread of this phenomenon, especially in rural areas. In some areas, girls who did not marry before the age of 18 are called “spinsters”

This type of marriage is exacerbated by conflict and humanitarian crises, when families see marrying off their children as a way to ease the burden and move to a more secure and stable situation, although unguaranteed

Whom to Blame For Early Marriage

Before presenting these laws, it must be noted that in 1964, an agreement called the “Convention on Consent to Marriage, Minimum Age for Marriage” entered into force. 16 countries had signed the Convention, and it includes 55 countries that are party to it, only 5 of them are Arab countries. This includes: Jordan, Tunisia, Palestine, Libya, and Yemen

Our research found that the laws related to child marriage are always lax, and allow through exceptions to marry off underage girls with the knowledge of governments and the judiciary, which allows the continuation of this phenomenon.

We divided the Arab countries into 3 categories: countries that forbid marriage before 18 with exceptions; countries that allow marriage for those under the age of 18; in addition to a country that does not specify a minimum age for marriage

Saudi Arabia: Underage girls, below 18, are allowed to marry, if they can submit 3 medical reports proving physical fitness and maturity, in addition to two reports from psychological and social specialists

The UAE: It is allowed to marry under the age of 18, through a committee formed at a decision of the Minister of Justice or the head of the local judicial authority to look into the case

Egypt: The law prohibits marriage for those under the age of 18, but early marriage is still widespread in the country

Oman: The law sets 18 as the minimum age for marriage, but those below this age can marry with the permission of a judge.

Jordan: 16-year-olds are allowed to marry, with the approval of the judge

Palestine: The law sets the age of marriage at 18, with exceptions

Morocco: Under-18s are allowed to marry, with exceptions, including leaving it to a judge’s decision

Libya: The law requires the age of 20 for marriage, but it also has exceptions. For Marriage of those under this age, the matter is left to the court

Tunisia: Although the law requires the age of 18 for marriage, marriage can be completed before this age with the permission of the President of the Court of First Instance

Algeria: The law sets the age for marriage at 19, but a judge is allowed to authorize marriages before this age if “the interest so requires.”

Sudan: The law sets the legal age at 18, but the Personal Status Law allows a girl to marry even if she is as young as 10 years old

Mauritania: Marriage can be consummated for those under the age of 18, subject to the consent of the guardian

Djibouti: Marriage is permitted for those under the age of 18, with the consent of the guardian

Comoros: Marriage can be consummated for those under the age of 18 with the consent of parents

Arab countries that allow marriage before the age of 18

Bahrain: It is permitted to marry for those under the age of 16, and those under this age can marry with the permission of the Sharia court

Kuwait: A girl is allowed to marry when she reaches the age of 15, and a boy is 17 years old

Qatar: A girl is allowed to marry at the age of 16, and a boy at the age of 18. The marriage can be completed before this age, after the approval of the guardian, and with the permission of a competent judge

Lebanon: The minimum age for marriage in Lebanon varies across sects, and many of them allow girls to marry at the age of 14 or less

An Arab country with no minimum age for marriage

Yemen: The Personal Status Law does not specify an age limit for marriage in Yemen, which led to the marriage of girls as young as 8 years old

Figures on child marriage in the Arab world are quite alarming, especially with the continuation of this phenomenon under the eyes of the authorities and families

– 18% of the girls in the region were married before the age of 18, according to the United Nations

– In Sudan and Yemen, one in three girls marry before they turn 18

– Mauritania records one of the highest rates of early marriage in the region, with 37% of girls marrying before the age of 18. The country also records the highest fertility rates

– In 2019, Morocco registered more than 27,000 applications for the marriage of minors

– In 2018, Egypt’s Central Agency for Public Mobilization and Statistics reported that 117 children were married, and that 50% of marriages in Upper Egypt were those of children, while the divorce rates hit 51.6 percent