Sexually abused: The hidden meaning of children’s shapes and their scribbles 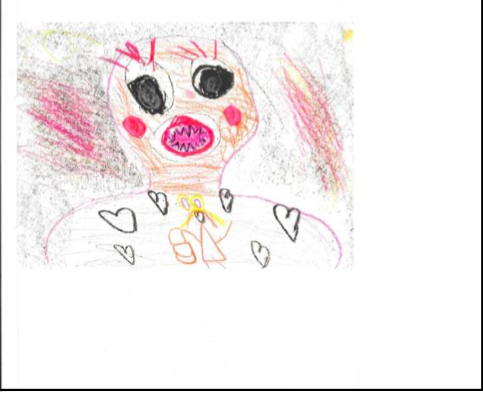 Your child’s quirky art isn’t just cute—science suggests that even the most bizarre depictions can have deep creative intention.

High on the list of awkward social interactions is the moment when a dentist or a coworker shows off her young child’s nonsensical art. A bystander might think the art—or at least the fact of its existence—is cute. Or she might think it’s ridiculous or downright terrifying. In either case, a common reaction is to smile and ask, “What’s it supposed to be?”

After all, these creations rarely look like anything fully recognizable or “real.” I uncovered a host of idiosyncrasies after asking parents about their kids’ art. There was a sideways house (or was it a knife?); a giant tooth resembling candy corn; a supposed self-portrait consisting of an oval with some jagged lines in the middle. Observers tend to laugh these sorts of things off as a kid’s erratic artistic process. If the drawing seems angry or dark, they might worry about what it means.

But experts say these responses rely on an outdated understanding of children’s drawing. Starting in the 20th century, psychologists tended to assume that a kid had reached a high level of drawing development if she could depict something realistically. They argued that when a child drew something simple-looking, like a human figure in the “tadpole” style—a sort of circular head with arms and legs jutting out of it (and, usually, no torso) that’s common in kids’ drawing—it was because of the child’s misconception of how, say, the human body is organized. A drawing with abstractions or quirks? That meant a child  didn’t quite understand the object she was trying to depict. Or, according to later theories, it simply meant she didn’t know how to represent things realistically (even if she did understand how the thing looked in the real world). But today, a growing number of psychologists suggest that it’s a mistake to see any drawing that doesn’t look “real” as inferior or wrong.

Child of 7 abused by female