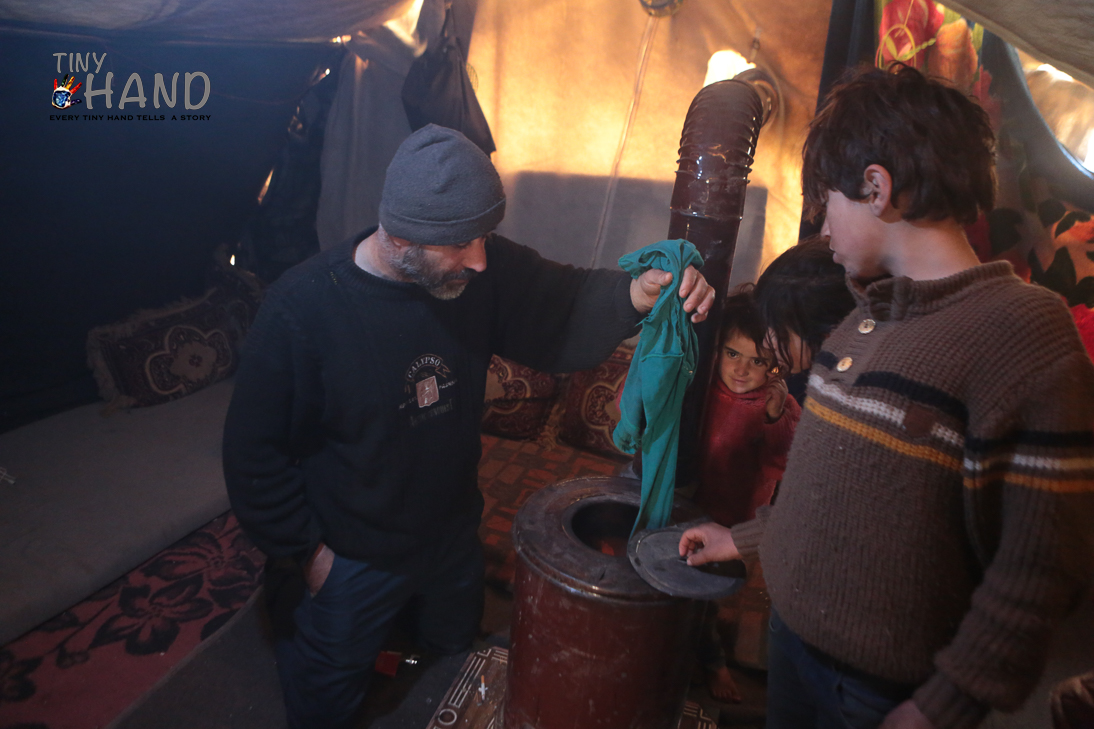 Going outside the tent was not an option. The ground was muddy; the wind was strong, and it was pouring like an unpleasant waterfall.

With heavy hands, the father took a small piece of clothing, possibly one of his children’s, stared at and threw it into their humble fireplace. The fire immediately consumed it. The children watched that piece turn black little by little, yet it was not the time for sadness.

The little kids gathered around the fireplace to warm up their shivering hands. Later on, the warmth of the fireplace began to slowly fill the place. The kids’ cold bodies calmed down, but the father’s heartbreak was burning and growing bigger and bigger. 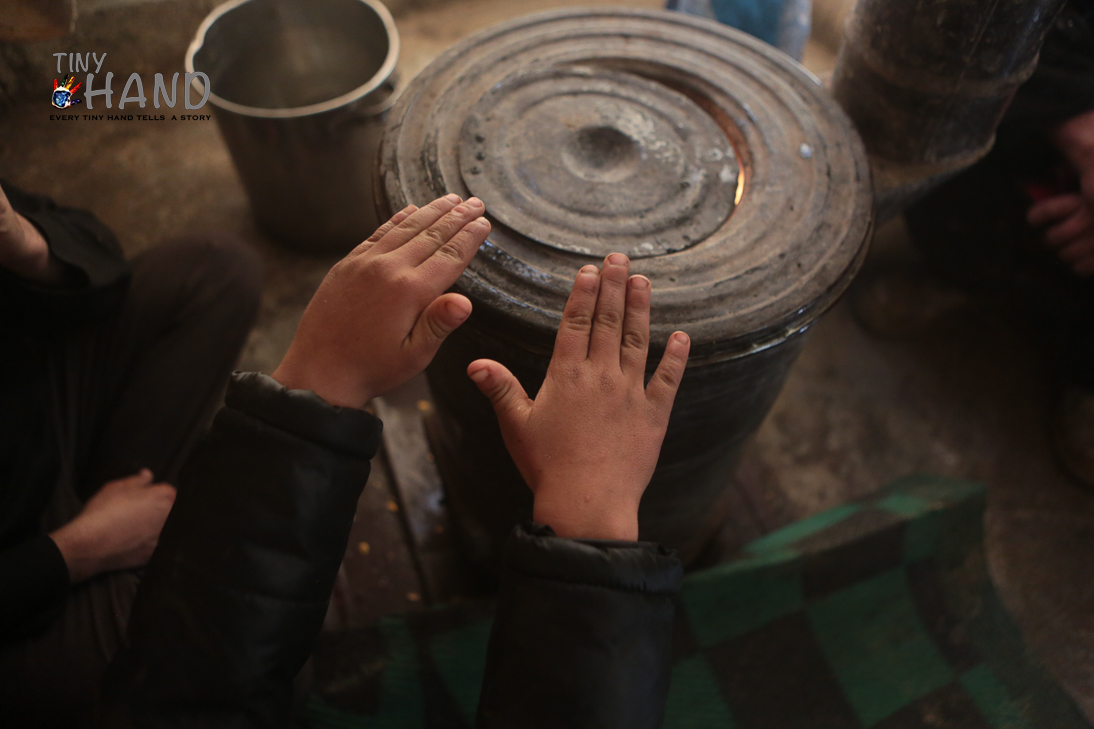 This and even harsher scenes are quite common in the displaced camps in northern Syria, where hundreds of thousands of displaced people struggle to get warm in freezing cold winters.

According to the United Nations, more than 1.6 million people live in over 1,300 makeshift camps in northern Syria, hundreds of which are random and lack the minimum necessities of life.

There, people are forced to use heating methods you may have never heard of before. Everything there can be used for heating, even if it poses direct health hazards to the displaced and their children in particular.

Mohammed, a father of five children, stands in a tent filled with lots of plastic bags, seemingly children’s clothes, bottles of shampoo, and plastic sheeting. Every day, Mohammed burns these things in the fireplace he and his children gather around to warm their hands and feet up.

Mohammed feels desperate as he knows that plastic and nylon materials are harmful to his children. “Their smell and smoke fill the tent,” he said, “But I can’t help it.” 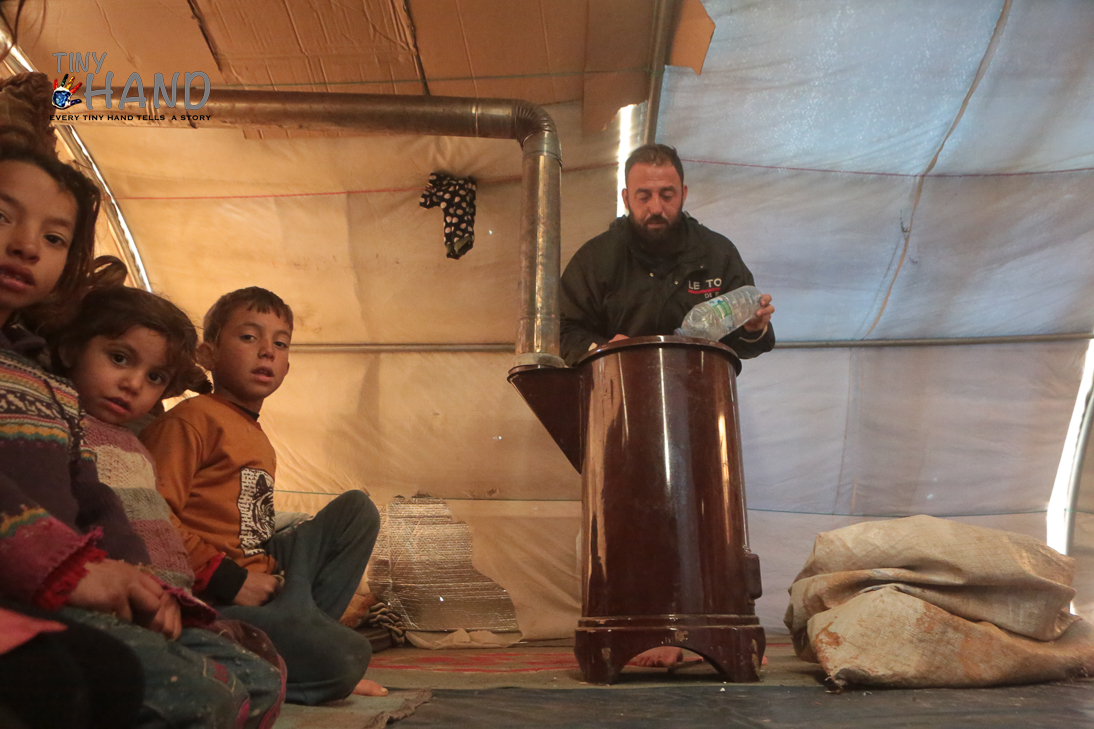 In their quest for warmth, Mohammed’s children pay a heavy price. They go out to the center of Azaz city, in order to collect packages and plastic bags from garbage containers and the streets. If what they collect is not enough, Mohammed says, they have to go to the landfills to find materials to be burnt in their tent.

In his tent, the father told Tiny Hand that he could not afford to buy firewood, which is a better and safer heating means. Therefore, he relies mainly on burning plastic things in the heater. However, he always fears that one day the heater will turn into a disaster for him and his family members as many of the primitive heaters used in the camps led to fires and killed the tents’ dwellers.

In another tent, Abu Hamad grabs an iron bar to move the nylon and plastic inside the heater and make sure they are ignited. Next to him lies a bag full of paper and nylon. Every day, he got exhausted in search for materials to use for heating. 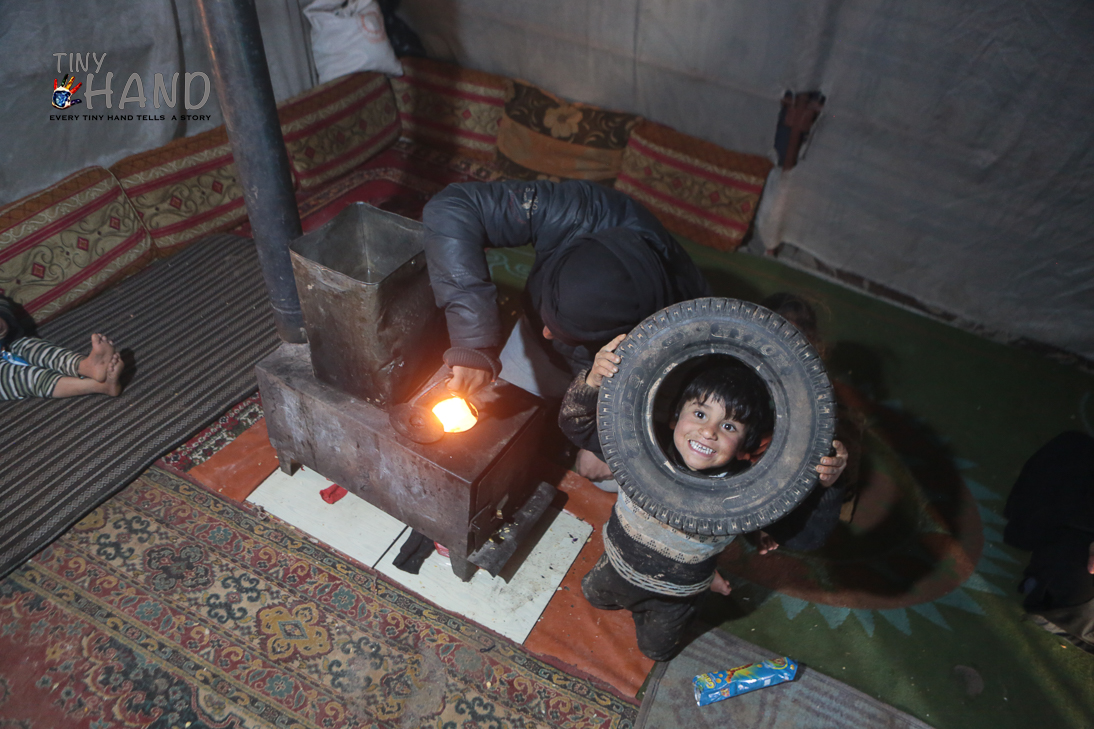 Abu Hamad asks people, especially vendors, not to throw cartons, nylon, and plastics into containers, as he and his children desperately need them.

Abu Hamad complains about the high price of diesel and hopes that one day he will be able to buy and use it to help his children warm up. As for now, he is forced to find other options. On occasions, he had to cut the grass and throw it in the fireplace.

Upon visiting several other tents, we found people who resorted to other heating methods. Mahmoud, for example, was busy cutting a rubber tire, or the so-called kauçuk in Syrian dialect.

Cutting a rubber requires physical strength and special tools. However, Mahmoud lack those tools, so he used a small knife that drains his energy.

As they burn in the heater, the rubber pieces evoke an annoying smell filling the space, along with its many hazardous effects on the people in the tent. 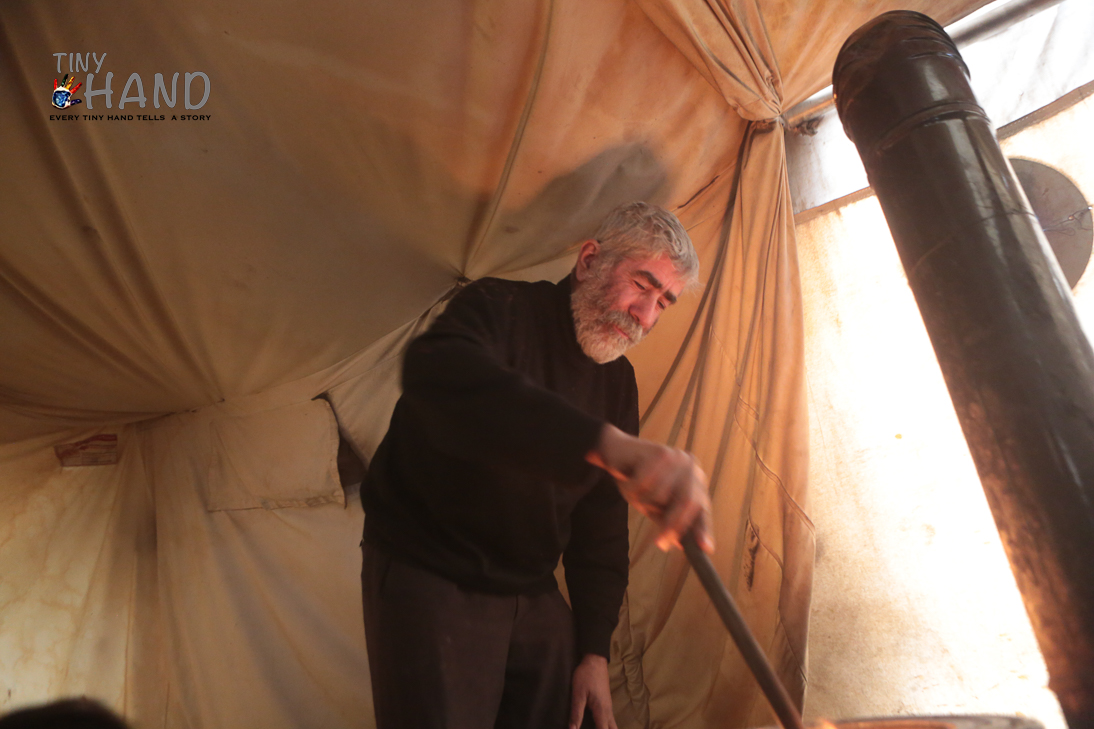 A few meters away from Mahmoud’s tent, Hassan was in pain, moving with a stick the materials he had put inside the heater. The fire was coming out of the heater and burning his fingers. He hits on his leg with his hands out of pain and discomfort.

The bad situation of other families in northern Syria’s camps has prompted some to resort even to using cow manure for heating their tents. This means they are ready to bear the foul smell they inhale in exchange for warmth.

These unhealthy heating methods can cause serious damage and disease to the displaced later in their lives.

In a statement to Anadolu Agency, Abdullah Ammouri, a doctor, said: “Burning plastic materials and inhaling their smoke is one of the main causes of serious diseases, especially for pregnant women. It may sometimes lead to delivering children with congenital defects.”

More seriously, the toxic compounds that result from the ignition of substances can weaken the human immune system. In some cases, it may lead to serious illnesses, including liver and lung cancer.

According to Doctors Without Borders (Medecins Sans Frontiers), people living in northern Syria’s camps face the prospect of suffering from respiratory diseases, waterborne diseases, and frostbites as well as complications related to smoke inhalation and burns due to the inadequate heating methods and the fuel that is stored in the tents.”

For instance, MSF has noticed an increase in respiratory illnesses by 30% between autumn 2019 and winter 2019-2020 in Deir Hassan camps, even before Covid-19 arrived into northwest Syria.

Moreover, respiratory illnesses are constantly in the top three illnesses reported in our facilities in the northwest, especially during winter. 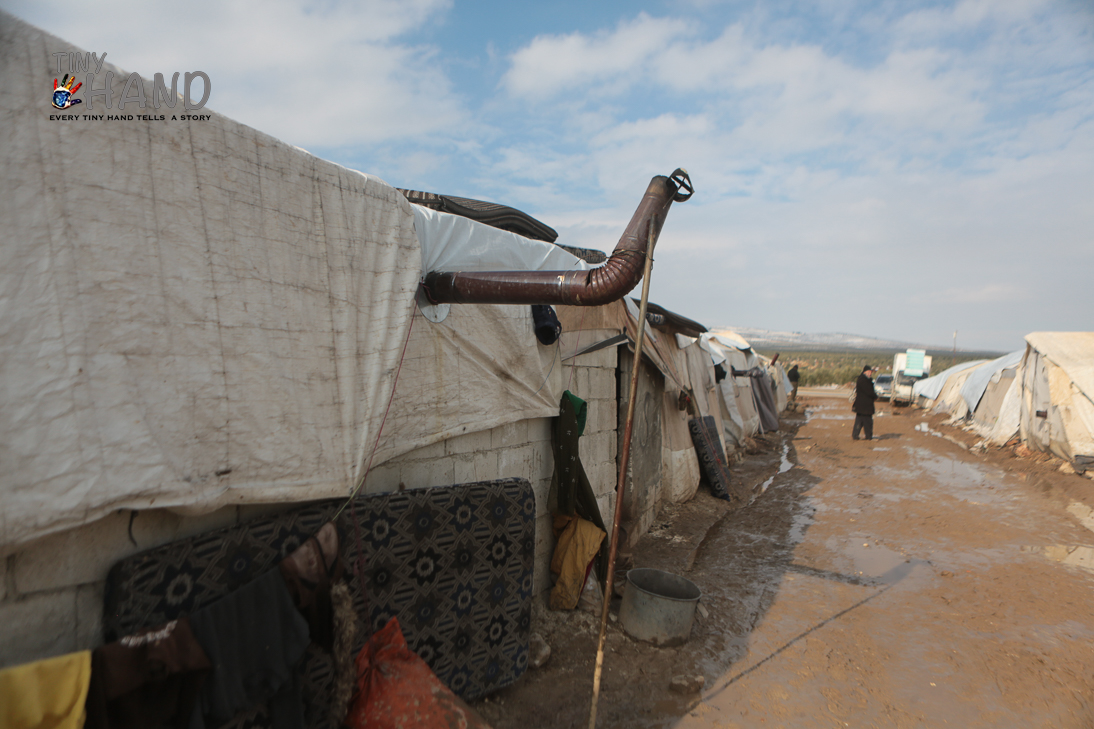