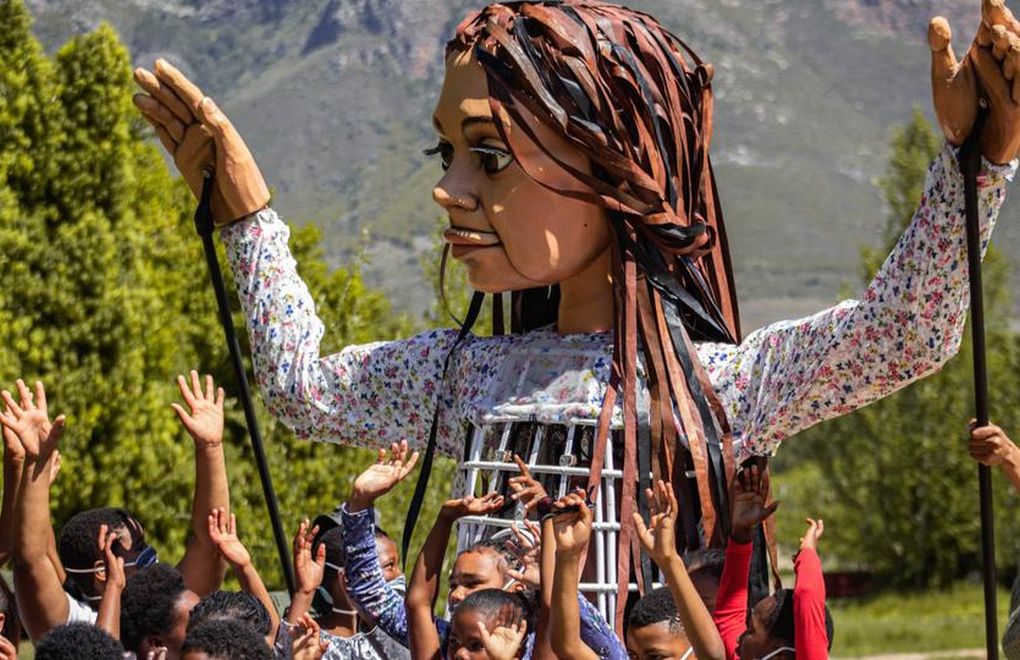 From being pelted with stones in Greece to receiving a papal welcome in Rome, the giant girl’s migrant trek from Syria to Manchester provoked powerful responses

in Greece, far-right protesters threw things at her as she walked through the streets, local councillors voted to ban her from visiting a village of Orthodox monasteries, and protests in Athens meant her route had to be diverted. In France, the mayor of Calais raised objections to her presence.

At times, the 8,000km journey across Europe of a 3.5m-tall puppet child refugee highlighted the hostility experienced by refugees who have been travelling along the same route from the Syrian border to the UK for years. Elsewhere, this ambitious theatrical project has triggered the scenes of welcome its artistic directors hoped to inspire when they embarked on this walk in July.

producer David Lan says the exercise has forced thousands of people along the route to reflect on their attitudes towards refugees, particularly towards the hundreds of thousands of displaced children forced to flee their homes because of conflict over the past decade.

“If I was to say to you we had nothing but warmth and support along the 8,000km journey, it would not be true,” he says. “But what Little Amal seems to do is take the experience of people who are quite brutally marginalised and put it in the centre. This is about goodwill. It is an opportunity for people to be sympathetic and imagine what it would be like to be her.”

All along the route, the production has visited refugee camps and organised creative projects with real child refugees. In Gaziantep – at the Turkish border with Syria, where the walk began – refugee children made lanterns to welcome her. On the Turkish coast, she traced a path of abandoned shoes by the beach, representing thousands of refugees who have drowned attempting to cross the sea. In Italy, the puppet went to the Vatican and shook hands with the pope. In Brussels, thousands of children wrote letters to her, forcing them to think about the experience of being a child refugee.

Constructed by War Horse creators Handspring, the puppet is intensely expressive, pacing above crowds, observing everything while interacting with children, registering happiness, anger, and occasional pain – all the emotions that a nine-year-old child might experience. “She’s very big,” says Lan, former artistic director of the Young Vic theatre. “So everybody can see her, and she’s very brilliantly designed, very elegant in her movements. She’s being celebrated and it’s very powerful.”

An unaccompanied child refugee searching for her mother, the character of Amal (which means hope in Arabic) was developed from a play created by the refugee theatre company Good Chance. It was launched in the Calais encampment at the height of the migrant movement of 2016. Former refugees from Calais are among those working as puppeteers for the production, manipulating her arms in greeting as she walks through European cities.

The actual journey has very little in common with the experience a refugee child might actually have had, Lan says. “We’ve got to be really clear about that. The route we’re taking is a route which refugees have taken but we stay in hotels, we have passports.” At times the juxtaposition of the artistic exercise and the daily reality of life for Europe’s homeless refugee population has been difficult to navigate. Last week in Brussels, the production team stayed in a hotel, where they found refugee families sleeping on their doorstep.

In Larissa, in Greece, about 300 children had gathered with puppets they had made to welcome Little Amal to the city, when rightwing protesters arrived and starting throwing stones at the performance, hitting the children. “The children had prepared for many months,” says Markopoulou. “Then people arrived and started throwing objects at the kids – it was very harsh. Little Amal was in the headlines for days. People tried really hard to surpass all that negativity and sometimes a negative response can bring more attention than something that’s more peaceful. The whole country was talking about it. It was very impactful.”

The positives have outweighed the negatives, artistic director Zuabi says: “We have seen a lot of generosity. We’re doing this project to celebrate our shared humanity. We have met people ready to open their hearts and cities and think differently about this issue. An easy way to approach it is to say, ‘Let’s build fences, seclude ourselves, get out of Europe.’ But we wanted people to think about how they can welcome these people so they aren’t marginalised. Our nine-year-old, three-and-a-half metre giant has brought great joy. After almost two years of Covid, people are flocking to see her – but also to be together, which has been very touching.”

Nahla, the Little Syria Girl in Chains, Dies of Starvation and Torture

Do you love your father? Yes, I do. What does he do to you? He ties and beats me! It is a video which is a few seconds long. It had followed the murder of the five-year old Nahla Othman who lived in a refugee camp in Syria. …

Lebanese security forces have committed shocking violations against Syrian refugees who have been arrested, often arbitrarily, on terrorism-related charges….

01 November, 2021
Categories
check out latest instagram photos
There are More than 6 millionChildren in need of

All children have the right to live free from war

Children played at a makeshift camp for migrants a

"Imagination is the highest kite one can fly." ~ L

A Wakhi girl carrying yak dung for the cooking fir

Taiz, Yemen Children play in a camp for internall

‏Hasan selling Falafel in the street of Al Hol d

A bird can go everywhere Elsa, 5 ‘I dream of be

There are More than 6 millionChildren in need of