‘Parents are dressing up their children to be buried’: Syria’s war on young escalates 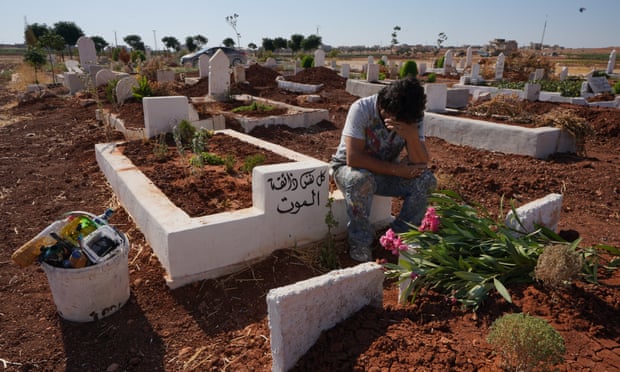 Amid the rubble of bombed homes in Binnish, a town in north-west Syria, a brightly painted mural stands out. The image shows an intact house, with love hearts streaming from the windows. Overhead, however, the dark silhouettes of birds are accompanied by helicopters, warplanes and missiles, and the garden’s red and yellow flowers look like flames.

The mural is the work of 13-year-old Hussein Sabbagh, who was eight when his family fled Bashar al-Assad’s attacks on Aleppo in 2016. Like millions of other Syrians, the Sabbaghs ended up in north-west Syria, the last pocket of the country that remains outside the regime’s control.

The family tried to build a new life despite the fact that war still raged around them: for Hussein, there was respite in football, and helping the local artist Aziz al-Asmar with his famous political murals. But the teenager’s dreams of being a painter ended last month when regime forces targeted a swimming pool in the town of Fua with artillery shelling. Hussein, along with his 17-year-old brother, 23-year-old uncle, and three more civilians, was killed.

“Hussein was loved by everyone. He helped me in many of the murals I painted … He was talented and had such a beautiful imagination,” said Asmar. “There was one particular drawing that he loved to paint a lot, a house with love hearts … He wanted to say that these bombs kill love and destroy homes.”

Hussein is one of 27 children who have been killed in government attacks across north-west Syria in the past two months alone as Bashar al-Assad’s war of attrition takes its toll on the area’s youngest and most vulnerable residents. Seven school buildings have also been hit, adding to the regime’s ugly track record of targeting civilian infrastructure.

“We have begun to notice a pattern in recent years, where the bombing gets worse on holidays like Eid,” said Laila Hasso, the director of communication and advocacy for the locally run Hurras Network, a charity that works to protect children in Syria.

“Thirteen children were killed in just three days. Now every time Eid comes we are afraid we will lose more children. Instead of giving them new clothes to dress up and celebrate, parents are dressing up their children to be buried.”

About three-quarters of the estimated population of 3.5 million fled to the north-west to escape fighting in other parts of the country. Living conditions are dire and have worsened since last year’s collapse of the Syrian currency, which sent food prices soaring.

Asmar, the artist, went to leave flowers at Hussein’s grave in Binnish last week. Despite the pain of losing his young assistant, painting remains a way to hold on to hope and remind the world that Syrians still dream of peace and justice, he said.

“Since I came back to Syria from Beirut years ago, I seek to draw a smile on children’s faces. I try to make them forget, even for a moment, the terror and war they’ve lived through,” he said.

“I let them participate with me so that they are able to express their feelings through art. I want to deliver a message to them that hope still exists.”