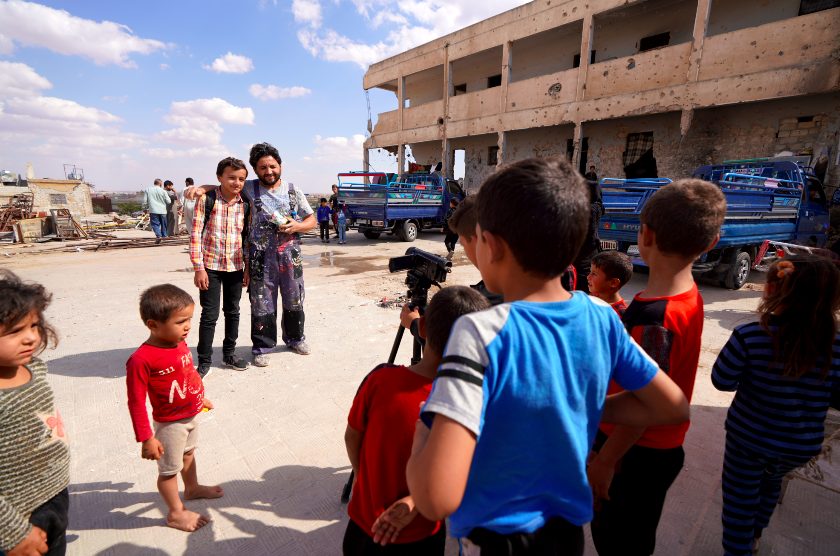 While shooting videos accompanied by the displaced camps’ children and drawing murals on the walls of schools and buildings, Muhammad Aziz Al-Asmar had never imagined being nominated for the “International Children’s Peace Prize 2021”, to be the only Syrian and Arab child nominee.

Given his great efforts to convey the suffering of Syrian children, especially those who have been subjected to violations by Syria’s Assad regime and its allies, the 13-year-old Syrian child was nominated for the prize by the Syrian Network for Human Rights, a UK-based independent group that monitors Syrian casualties of all the parties in the Syrian civil war.

On its official website, KidsRights, the Netherlands-based foundation awarding the International Children’s Peace Prize, announced a list of 169 nominees from 39 countries for this year’s award, including Muhammad Al-Asmar, the only Arab child candidate.

Among a group of children with shabby clothes and dusty hair, with the displaced camp in their background, stands Muhammad confidently, talking about many issues related to children and their suffering from the scourge of war and its impact on all aspects of their daily lives, reminding the world of their uncertain future.

Originally from Binnish, a city in Idlib in northwestern Syria, Al-Asmar sheds light on a range of thorny issues in the videos he publishes on his social media accounts. In elegant English, he speaks about dropping out of school, child labor, underage marriage of girls, and economic, psychological, and physical violence against children.

Aziz Asmar, Muhammad’s father, confirmed that his son keeps pace with the events and talks about the suffering of the displaced children in the camps he visits constantly before he was nominated by the Syrian Network for Human Rights. “Muhammad’s nomination was thanks to a video clip he filmed to talk about the dangers of closing border crossings for displaced camps’ residents, especially the young ones,” the father told Tiny Hand.

For Aziz Asmar, a Syrian artist, his son Muhammad succeeded in conveying Syrian children’s voice to the world. He sees his mere nomination as “a victory for Syria’s liberated zone despite the regime’s bombing and killing of innocents,” he said.

Since he was four, Muhammad shows signs of special potentials and talents.  Being able to answer calculations with results of as high as seven-digit numbers, he was called a human calculator. At an early pre-school age, he learned how to play chess and beats his opponents. “More than one doctor described him a genius and that a child of his age with similar capabilities is quite rare,” Muhammad’s father told Tiny Hand.

Upon receiving the news of their son’s nomination for an international peace prize, Muhammad was pleased the most. The rest of Al-Asmar’s family see the nomination as God’s blessing and a reward for Muhammad’s hard work and dedication.

“We have confidence in Muhammad’s potentials and a conviction that he is worthy of competition, especially since other competitors, unlike him, lead a normal life,” they said, “Nevertheless, he proved to be creative despite the war’s harsh conditions.”

With his high limitless dreams and ambitions, Muhammad sees this nomination as a mere beginning for his goal of delivering his messages to the world’s people and the international community, calling on them to stop the war in Syria and punish all those who had involved in killing and displacing children.

Feeling responsible for the children, Muhammad regularly visits the camps and gets to know the children there, sharing with them what he has learned and the skills he acquired. Moreover, he learns about them to convey their reality. He also helps children disabled by war to reintegrate into the community and resume their normal lives.

Working with his father, Muhammad also draw “Graffiti” on Idlib’s bombed and demolished buildings and publish pictures of them on social media to deliver a message to the world to stop military operations.

Being the most widely spoken language in the world, Muhammad strives to master English to convey his humanitarian messages across the world, talking about people with special needs and amputees by war and bombing, and about youth’s dreams and concerns. To achieve this goal, he gets help from Omar Al-Asmar, his teacher and head of “Yes Institute”, and Mohammed Hajj Kaddour, the journalist who films his videos.

A distinguished multitalented child, Muhammad has a strong photographic memory that helps him to memorize information so that he memorized the Qur’an within a short period. Muhammad is determined to master all that he learns such as swimming, calligraphy, and engineering. He also loves mathematics and numbers and dreams of being a mathematics teacher and director of a center that teaches children mental arithmetic.

Since 2005, the International Children’s Peace Prize has been awarded annually to a child who has made a significant contribution to advocating children’s rights. It is handed out by the Summit of Nobel Prize Laureates. Last year, Sadat Rahman from Bangladesh won the prize for his involvement in setting up his social organization and mobile app ‘Cyber Teens’ to stop cyberbullying.Launched by Marc Dullaert, founder of the KidsRights Foundation, during the World Summit of Nobel Peace Laureates in Rome, the prestigious award provides a platform for children to express their ideas and personal engagement in advocating children’s rights