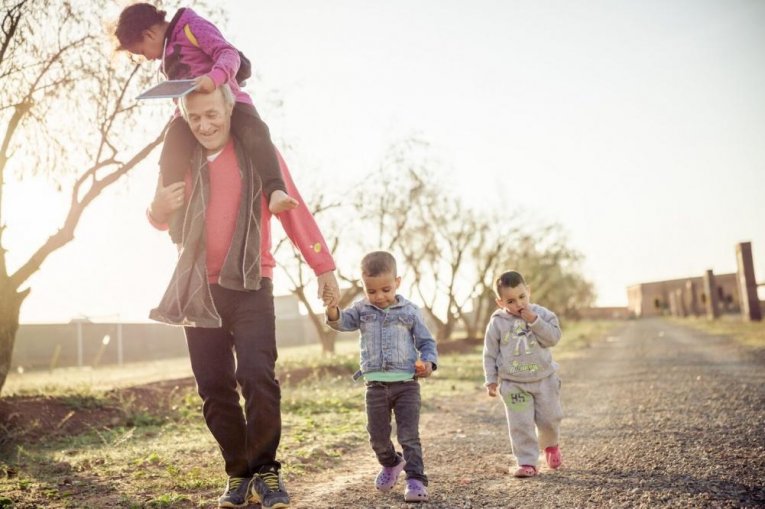 Young children, who grow up cared for by their fathers and mothers, live in a world full of innocence and pleasant dreams.

However, there are other children who wake up terrified and confused from the horrible nightmares, whereas they constantly look for their mothers who abandoned them after their birth.

These abandoned children live in a struggle with the recurring question, “Why did not my mother want to keep me?”

According to government official figures, ten thousand Moroccan children live in this miserable condition. However, the real number is greater by multiple times according to the statistics carried out by associations working in this field.

Since it’s better to light a candle than curse the darkness, the Swiss citizen, Hansjorg Huber, decided to provide a shelter for tens of Moroccan children abandoned by their parents.

He divided his wealth between his three sons and the 115 abandoned Moroccan children. He built them homes, offered them education, and provided them with alternative moms to care for them.

“I have three sons. I brought them here and told them that their dad will give another meaning to half of their inheritance. This is what I did and I became father to tens of other sons and daughters who deserve to be loved and cared for,” Huber told Tiny Hand in full confidence.

A few days ago, at the beginning of the new year, 2020, Minister of Solidarity, Family, and Equality Jamila El Moussalli revealed that authorities found 360 newborn babies abandoned in open-air streets in 2018 alone, noting that the total number of abandoned children found in the same year was 1741 children.

While the Moroccan statistics are shocking, a study conducted by Insaf Association, advocating children and women’s rights, said that the number of single mothers is continuously growing. The association recorded around 200,000 single women from 2003 to 2018, with 24 babies are abandoned each day.

The main reason behind the increasing numbers of abandoned children in Morocco lies in the existing punitive laws that punish single mothers for having sexual relations outside marriage. Fathers of those abandoned children often escape unpunished and mothers escape punishment by abandoning their babies or exposing them to danger.

Children’s village: their paradise on earth

The children hop and jump in the corridors and run into the playground, which is their best place. Upon seeing their father heading to them with a wide smile on his face, they rush to embrace and kiss him.

The joy and smiles on the faces of those children who suffer loneliness and miss the warmth of a family are what Mr. Huber provides in this village. He spends most of his time kissing them, wiping over their heads, and playing with those who would feel lonely.

Huber told Tiny Hand, “If no one cares for those innocent orphan and abandoned children, who will ever do that”. The Swiss man kept silent for a second then resumed, “Childhood is the real victim.”

“Therefore, I decided to build this village with half of my wealth with a lot of joy,” he affirmed.

Children’s village “Dar Bouidar” is located in Tahanaout, around 35 kilometers south of Marrakech. It cost its founder € 2 million and was established on 15 acres of land.

The village hosts several facilities, including 10 houses, a school, a healthcare center, and a mosque. It has 60 moms and 40 nursery caregivers looking after 115 children, aged some weeks to 11 years.

“I’m the happiest man on earth for what I’ve done. Why not and I’m a father to more than 100 children,” Huber told Tiny Hand.

Mr. Huber is keen to teach the children four languages. He offers them painting, theater, poetry, and sport educational courses. He believes that the children desperately need to practice arts and sports activities to help them heal the wounds of abandonment and overcome the agony of the question: “who are my parents? And why did they leave me alone in the street?”

For this reason, the school is equipped with halls for teaching music and theatre performances as well as gymnasiums.

According to the owner of the village, which is close to being full with the admission of 120 children, there are fifteen children in the village suffering from disabilities, such as paralysis, triple chromosome syndrome, and blindness but they receive care and attention from everyone, including the children.

“I am Swiss, but my heart is Moroccan and I have been living here for more than ten years. I regret that I have not come to Morocco long before that,” he explained.

At the end of his talk, the owner of the Children’s Village invited everyone to provide support for the children, care for them, and bring them clothes and toys. For those who are rich, he invited them to build their own villages.