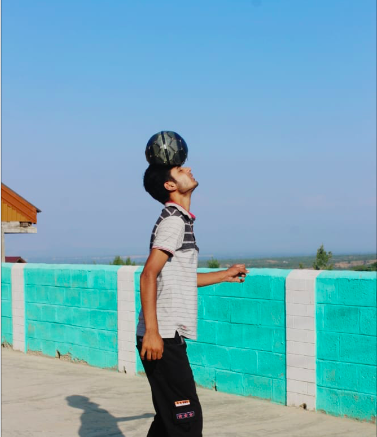 At exactly six o’clock every morning, the young man, Shah Huzaib, holds the medical apron in one hand and football in the other hand, as he will join his class only after practicing his favorite hobby and performing various football tricks.

He just needs a vast space in a neighborhood of Indian Kashmir where he lives, perhaps it is a bit difficult in a crowded city like Kashmir inhabited by about 15 million people. However, it does not matter, as any roof at a house or an abandoned building is enough for Shah to set off the adventure with his ball, focusing on a dream to be a world star in football like Cristiano Ronaldo, whom he considers his role model, as told Tiny Hand.

What distinguishes this relationship with football are the tricks he does. He films them and posts these videos on his Instagram account, as they are similar to those tricks that football stars do in their various advertisements, such as those in which the Egyptian player, Mohamed Salah, appeared in one of Pepsi ads.

These tricks attracted most kids of Shah’s suburb, asking him to teach them how to perform them. The Indian young man told Tiny Hand that he “helps his suburb’s kids to learn these tricks, and he is training them to play football professionally”.

This young man’s ambition is to take these tricks to a more professional level, but this is “somewhat difficult without support,” Shah explained.

The young man knows that he should not spend the rest of the day playing but rather studying online by attending lectures on the Zoom app. He is one of millions of students in India who have been affected by the COVID-19 virus outbreak as they found themselves behind computer screens attending their lessons.

“For the time being, however, it is enough for me to support my three brothers, my mother and my father, who works as a fruit seller and does the best he can for us,” Shah added