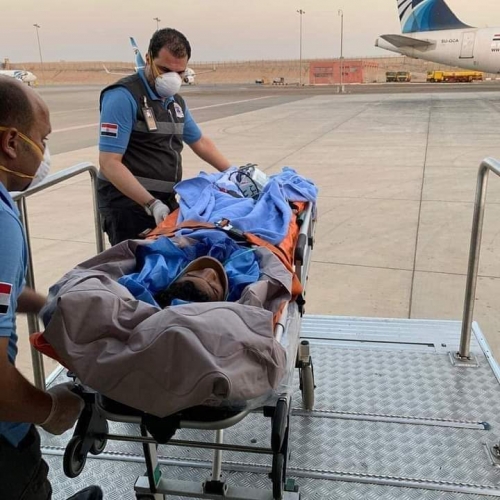 The torture of two working children in Egypt has sparked fury among social media users, who called for immediate action against child abusers, local media reported.

“We want justice … the government has taken care of the treatment of the boy and we believe in the judgment of God and his destiny,” said Abdullah, brother of victim Mohamed Mustafa Shahhat, 14.

Egypt’s Ministry of Health admitted Mohamed to a Cairo hospital for treatment after he was left quadriplegic in an incident that has been trending on social media.

The tragedy of the child began when a 35-year-old bakery worker threw him into the dough kneading machine, then pressed the start button and left.

When workers heard Mohamed’s cries for help, they took him out of the machine, unconscious, and took him to Kom Ombo Hospital, and from there to Aswan University Hospital due to his critical condition.

The hospital’s medical report states Mohamed suffered a cut in the spinal cord, a fracture of the sixth and seventh cervical vertebrae, a fractured rib, a broken shoulder blade, and fractured fingers.

Abdullah said: “We want Mohamed’s right through a fair trial, especially after we knew that the perpetrator was trying to get away from punishment by claiming that he had a mental illness.”

He added that pressure had been put on their mother to say the injuries were accidental.

About 1.6 million Egyptian children aged 12 to 17 who are victims of child labour, accounting for 9.3 per cent of children in Egypt. Child labouris criminalised by the Child Law and banned by Egyptian labour laws.

Unofficial statistics indicate that 63 per cent of working children in Egypt are exposed to physical abuse and violence by their employers.

A second case concerns a gruesome story about the beating and torture of a girl, 9, who works as a housemaid.

Omniah hails from Gharbia Governorate, in the Nile Delta, and works for a family in Giza Governorate, around 110km away from her house.

Pictures were widely circulated on social media showing her swollen face, and burns and blisters on her body.

Sabri Othman, director of the child emergency line at the National Council for Childhood and Motherhood, said the monitoring unit of the Child’s Helpline found a leaflet about the torture of the girl, who works for an ex-police officer and his Moroccan wife, in the Al Haram area of Giza.

Othman said the girl worked for 2,000 Egyptian pounds a month (Dh460). The officer and his wife tortured her to the point that “the girl’s father did not recognise her when he saw her for the first time.”

The Egyptian official said the injuries sustained by the girl included third-degree burns to 90 per cent of her body, plus bruises, a cut right ear and other injuries.

The Public Prosecutor ordered the suspects be remanded in police custody, pending investigations.

The Public Prosecution Office received a complaint from the victim’s father against the girl’s employers. The girl also confirmed the accusations.t

When asked by the Public Prosecution, the employers claimed the girl caused the injuries herself, because she refused to return to her family.

Investigations showed that the father of the girl, a 47-year-old farmer, was separated from his wife and the victim’s mother, 30, who had remarried and had a child.

Othman said statistics showed child abuse had not increased over the recent period compared to last year, but the type of violence committed had changed and child labour networks had emerged.a

He explained in the case of Omniah, a woman facilitated the girl’s work with the family in Giza. The same womanalso facilitated the labor of other children in factories or workshops.

During the first half of this year, the child helpline received 4,631 reports, including 985 of physical violence against children.