A Life At the Margins: Displaced Syrian Children’s Cold Beds 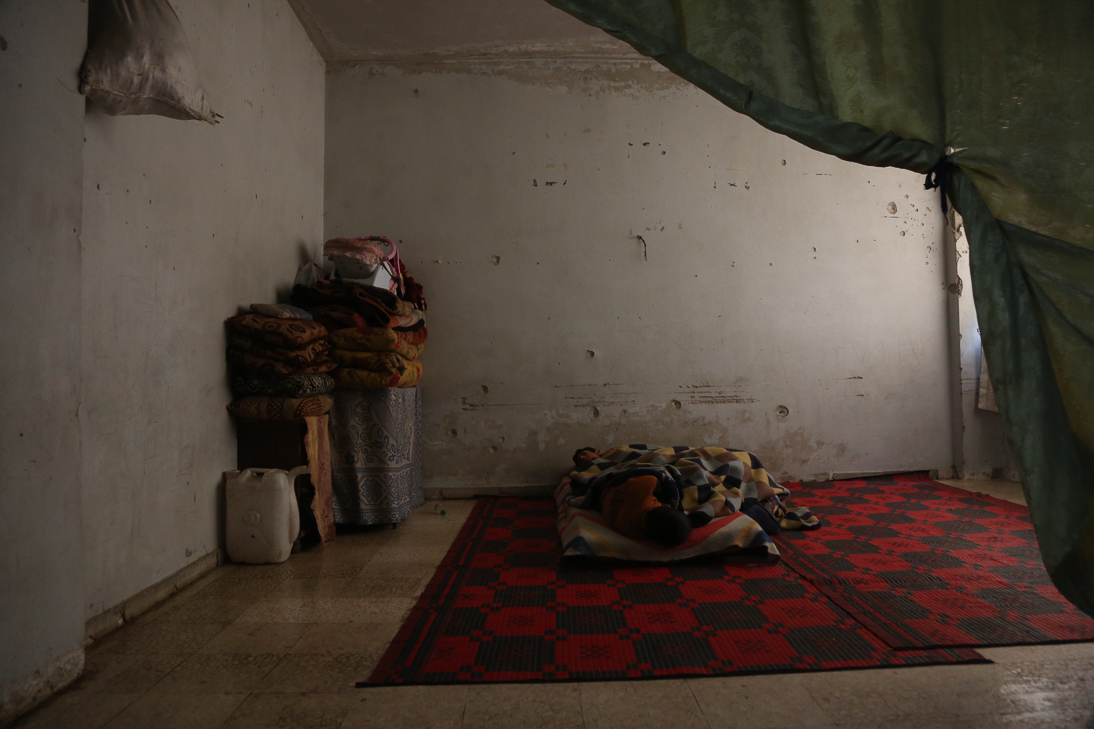 The children feel sleepy and cannot open their eyes. They gather the remains of their strength and go to bed. The first minutes are very difficult; their hands and feet shiver with cold; no one dares to move his foot an inch. They all seek to enjoy the bliss of that little warmth their feet began to feel while in bed. If they move their feet to the edge, their bodies will retract again out of cold.

In another place, on the same night, a number of children sleep in one bed. The last thing they saw before retiring to bed is a terrific scene on their wall, which carries the traces of a missile that destroyed large parts of the place.

There is a third and even a fourth similar story; an endless list of similar stories if you want. The stories you are going to read will leave you in no doubt that reality is stranger and more painful than fiction.

In that spot in Idlib, northern Syria, children live a life those who did not experience it can never imagine its details.

Where to sleep? That question has often robbed the sleep from the eyes of fathers and mothers, leaving them trapped between their kids’ tender bodies and the bombed remains of buildings that may collapse at any moment. 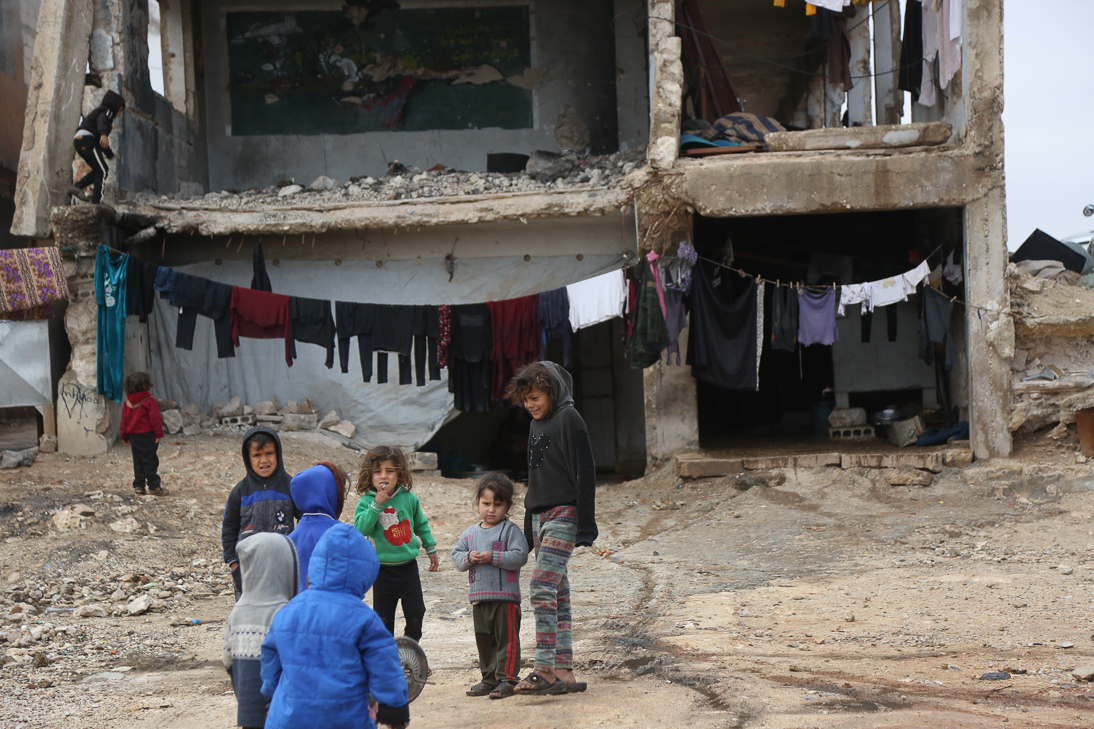 One day, children were playing at the entrance of a building disfigured by the war. Once, it was bustling with life, when pupils’ screams used to echo in the neighboring streets.

Nothing remained of that building but dilapidated structures. Once a school, the collapsed building has become a shelter for desperate families who were forced to live in damaged classrooms, with no walls in some, and nothing but misery inside others.

The mother, who looks after her children in this school, spreads her laundry on a rope tied to ruined poles. At night, all her children sleep in a small room; fully dressed in their jackets as if they were on a trip to play in the snow. In fact, they seek nothing but some warmth.

In another classroom, a father puts a blanket over his two children who wanted to sleep by a blackboard. In this place, the blackboard is not to write on anymore, after families have turned it into a place to hang their modest household utensils on.

In this school, you will find a water tank here, and worn-out children’s clothes there. You will encounter a child playing where students once used to study. You would see him grabbing and throwing rubble, and sometimes dancing as if to make fun of war’s cruelty and brutality. 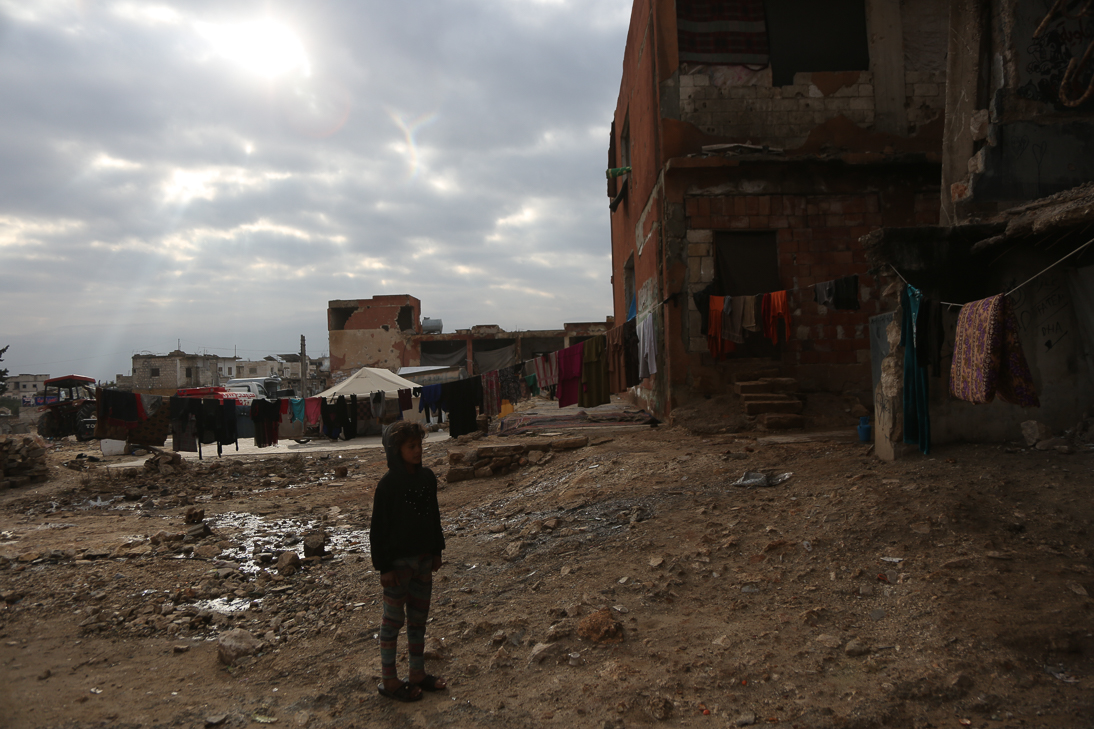 Hassan Al-Hamoud and his family also live in one of these classrooms. Hassan hates sleeping on his uncomfortable mattress, but he has no other choice. Moreover, Ahmed and his brother Uday do not feel warm in this place where there is no fireplace and the walls are always cold.

In his imagination, Hassan recalls the ruins of beautiful memories of the house where he grew up; talking about how he used to play there. Even in his dreams, where he sees himself playing in his yard, he would wake up later and realize he is going to relive a new day of misery. 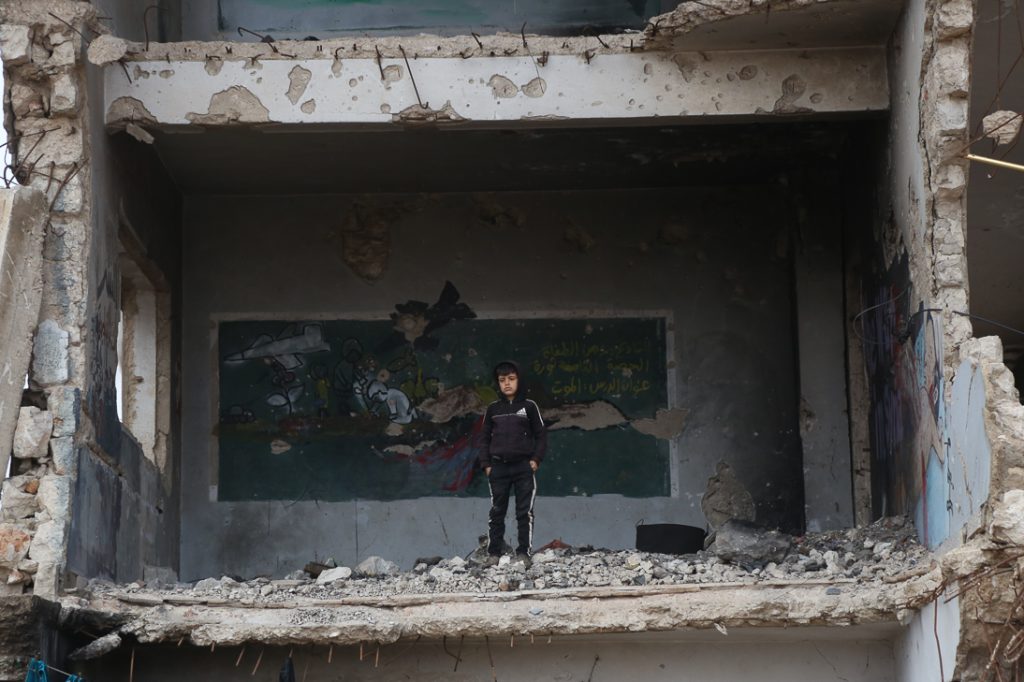 In Idlib countryside too, Ahmed Ghattash, 13, swallows the bitterness of life every day. Despite experiencing the harshness of living from his early day, he cried hard as he spoke to Tiny Hand in a quavering voice.

In the deserted place where Ahmed lives, every aspect of life is difficult. Every day, Ahmed and his brother Qusay walk a distance of 5 kilometers on their way to the nearest school. Their clothes get wet under the rain and the cold wind blow and hit the little kids. For Ahmed, going to school every day is an important, yet tough task because of a lesion in one of his feet.

The two children return tired and exhausted to their room in the olive mill. They sleep in a very modest place. If it were not for the mattress and a few blankets there, one would think it another deserted and lifeless place.

When Ahmed and his family want to get warm, they have no choice but to burn cardboards and sometimes firewood.

Ahmed told us he had a dream in which he saw himself back in his beloved Damascus to live again in his house there, where he used to live before he was forced to leave.

Ahmed ended his interview in tears. He complained about his family’s poor financial situation. He needs another operation on his foot to get rid of the pain and be able to move around better. However, the family can hardly secure their daily basic needs. 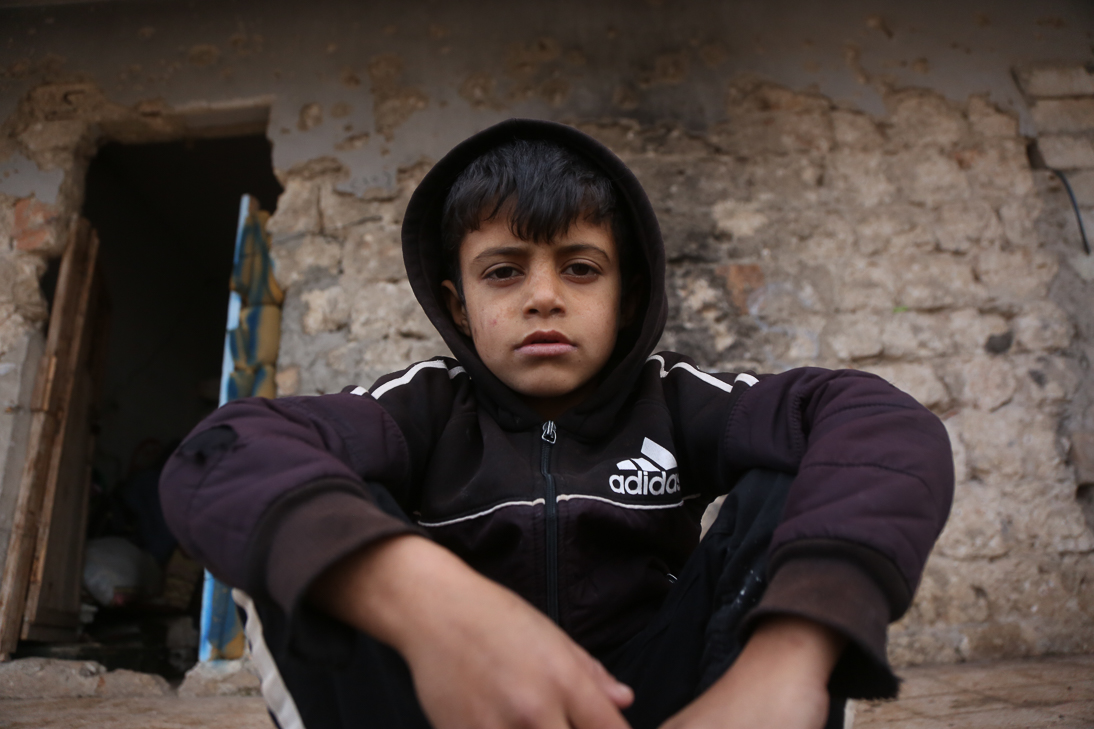 While Ahmed and Hassan’s families have a roof to sleep under, Nahar Al-Hassan and his family do not enjoy even that.

Nahar stays awake after midnight. The cold in his tent steels sleep from his eyes. Moreover, the child always feels afraid to sleep and wake up to find himself drowned in rain water.

In another tent, 11-year-old Amina sits under a blanket wearing her cap to get warm, like the rest of the family.

Amina is keen to keep her tent tidy, puts the blanket on the mattress, and makes sure that her things are in their proper place. However, everything Amina does is threatened with disappearance in a short time for rain means an alarm for her, causing anxiety and fear of water sweeping through her miserable tent.

In her dreams at night, Amina said in her innocent voice that she wakes up frightened of dreams that rainwater had flooded her tent. Amina hopes that one day she will return to her home to sleep in peace without worries. 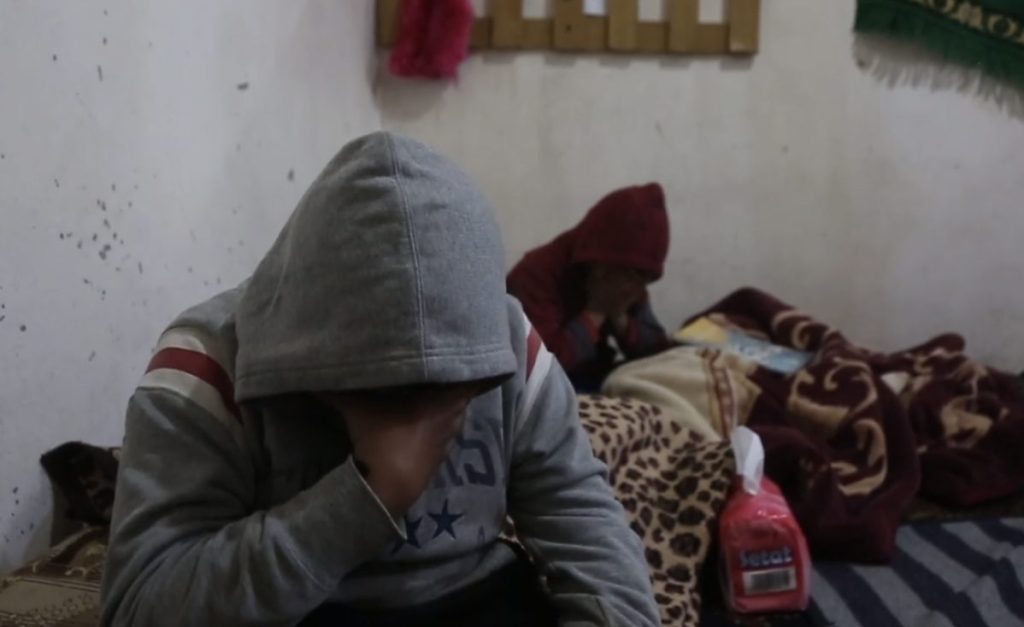 These children are just a part of a larger tragic scene the Syrians experience on daily basis. According to United Nations agencies, half of the Syrian population have been forced to flee their homes, while nearly 6.7 million, including about 2.5 million children, were internally displaced.

The United Nations and aid agencies indicate that over 13 million Syrians are in need of humanitarian assistance and protection, and nearly 90 percent of the population lives in poverty.

Children are also among the most affected groups by the country’s ongoing conflict. A report by World Vision revealed that the life expectancy of Syrian children has been reduced by 13 years since the conflict began.

Human rights organizations also estimate that about 3 million houses have been damaged or destroyed in Syria, forcing millions of people to live in extremely dire conditions. 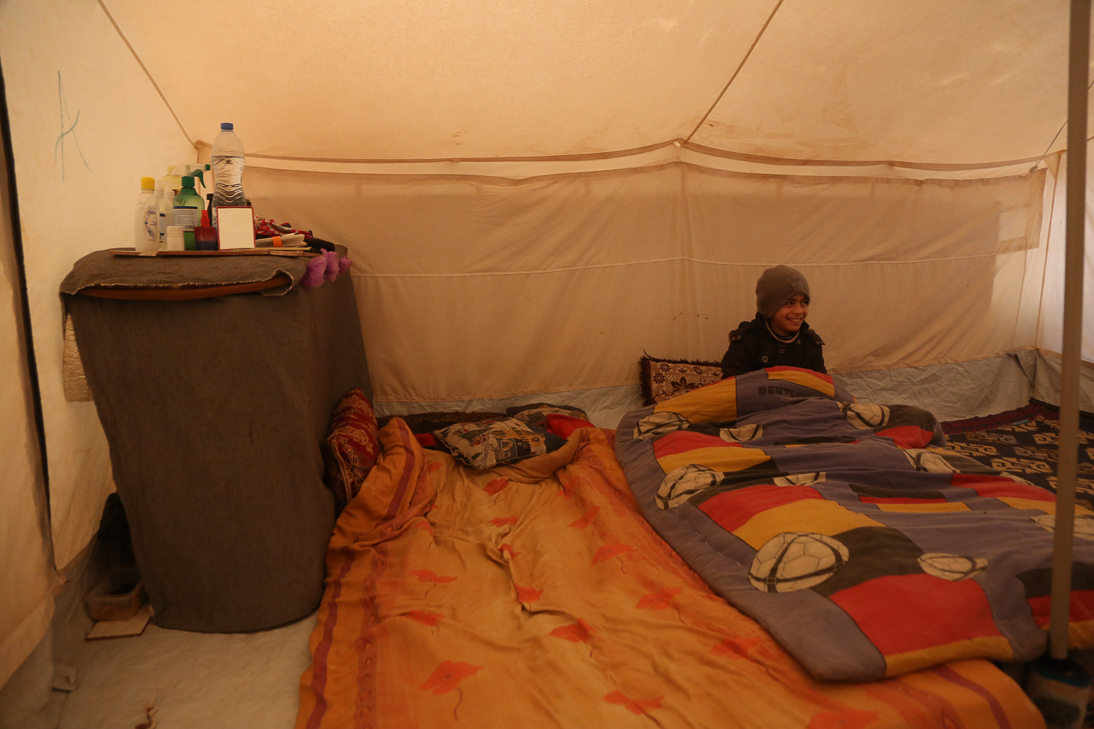