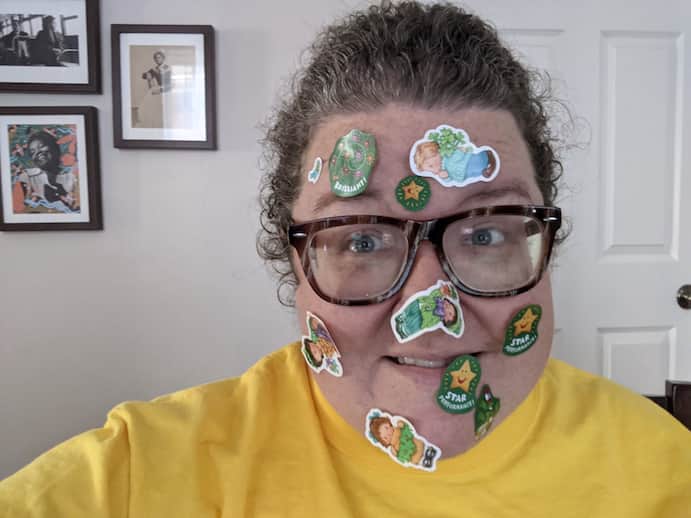 Diane Moon tried everything she could think of to get her students to participate in virtual learning: random name calls, breakout rooms, competitions for extra credit, movement breaks.

Moon, 27, a middle school math teacher in Prospect Heights, Ill., was desperate. Student participation has dropped drastically during remote classes, she said, and online school has taken a heavy toll on students — both academically and emotionally.

“It’s been really tough for everyone to get the kids engaged,” said Moon, adding that MacArthur Middle School, where she teaches, is entirely virtual. “As teachers, we feed off facial expressions. We are teaching to blank squares. It can feel like we are just talking to ourselves.”

Moon was willing to try anything.

When a colleague sent her a TikTok video of a teacher putting stickers on her face every time a new student participated, she figured it was worth a shot.

Right away, she saw children couldn’t resist it. Students who typically stay muted during class suddenly were speaking up and sharing.

“The kids loved it,” Moon said. “We made it a competition between my three core math classes. Whichever class got the most stickers on my face was the winner.”

The teaching tactic was so helpful, in fact, that Moon decided to post a short video demonstration on Twitter, hoping other teachers might find it useful.

n response to her video, hundreds of educators tried it, and many shared their sticker-covered faces as proof. And also, to get a laugh.

It’s unclear how exactly the sticker trend originated, but it has spread broadly across social media in recent weeks, emerging as a popular tool for teachers to encourage students to participate in virtual class.

The educator whose video originally inspired Moon to try the sticker trend is Taylor Dale, 24, a second-grade teacher in Fairview, N.C. Dale had seen the exercise on TikTok and decided to try it herself. It worked wonders.

“My students loved it. They were laughing, and I had never had all 18 of my students completely engaged in my math lesson,” said Dale, adding that she relies heavily on TikTok to find creative virtual teaching strategies and strongly recommends it to others.

Educators are acutely aware of how much children are struggling. A new study shows students across the board are falling behind, and students of color and those in high-poverty communities are most affected. Teachers are frantically searching for ways to reach students.

Psychologists have weighed in on the impact of virtual school on students’ mental health, as well as the importance of educators strategizing to mitigate the potentially damaging effects of learning exclusively behind a screen. Not all students are lucky enough to have a computer to use and Internet service that works, but for those who do, many are struggling and distracted during class.

“Children and college students are really lonely. They’re feeling really isolated,” said Alysia Roehrig, a professor of educational psychology at Florida State University. “We need to do these kinds of exercises to help pull students out and make them feel like they’re actually engaging with real people.”

Nober, 48, teaches technology to students in third to eighth grades from his home in Southampton, N.J. He’s a big fan of the sticker strategy, especially for children who had been hesitant — or just flat-out refused — to turn on their cameras during lessons.

“Little by little, as the stickers started to build on my face, cameras just popped on, and students started to share,” he said. “From that point on, they’ve been much more willing to open up to me and share ideas with the class.”

Nober said being silly is the key to keeping his students actively engaged during remote school.

For students, “there’s a loss of connection with each other, as well as with their teachers,” Nober said. “I’m a hands-on teacher, and not being able to see them and give high fives and fist bumps in the hallway has been a challenge.”

He does everything he can to fill the void.

“I’ve been trying a lot of different things. I don’t mind being silly or doing whatever it takes to engage the kids,” he said, adding that every Friday, one of the grades he teaches picks the color he will dye his beard that day.

“I’ve done split colors, too, because colors have tied,” Nober said. “It gets them really excited.”

Krista Coletti, 38, a fifth-grade teacher in Mishawaka, Ind., vouched for goofy exercises, which have also helped her get through to her students during the pandemic.

“They like to see that we’re human and silly,” said Coletti, who confirmed that the sticker technique was a tremendous success in her classes, too. “It’s a way to block out all the craziness with something fun. They were cracking up, and I was cracking up.”