In Syria, they sleep on monumental tombs 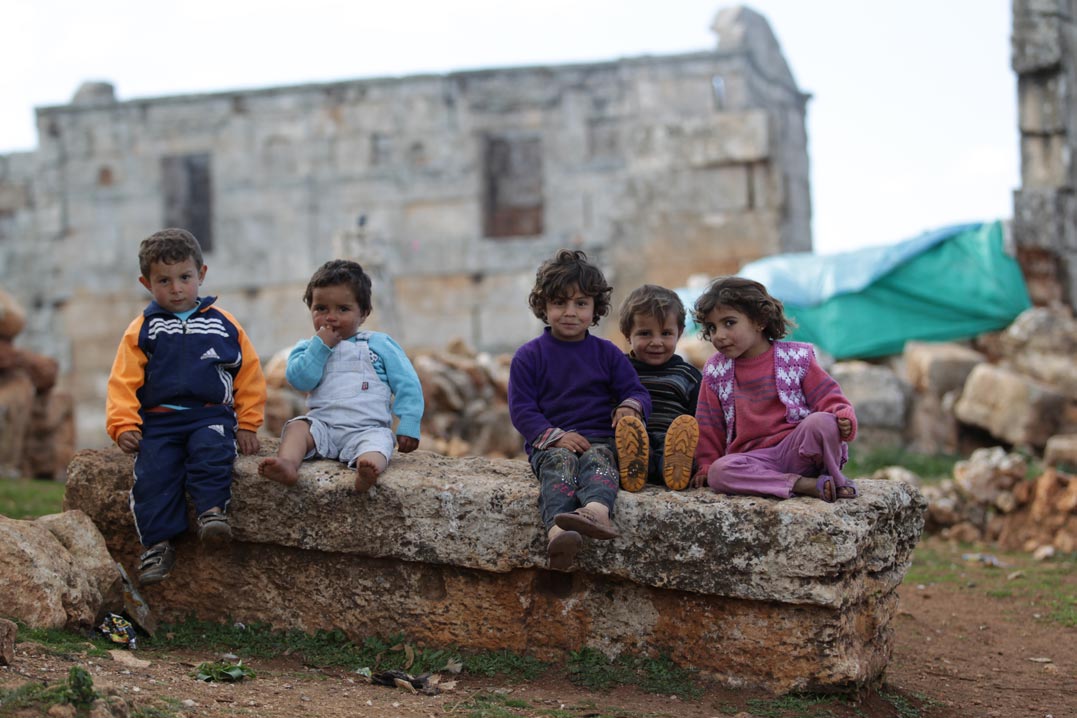 Washing lines stretched with their exotic colors give a strange look to the monumental stones in Serjilla that one day would attract tourists from all corners of the world.

Kids are running and playing among the archaeological caves in spite of the obvious signs of misery that appear on them, as they are barefoot and semi-naked.

An older woman is cooking outdoors in a bowl as old as the wrinkles of her face as she struggles her old age and fatigue.

The archaeological caves and monumental tombs of Serjilla, an ancient city in Jabal Al-Zawiya region, southwest of the city of Idlib, which witnessed wars and earthquakes in the Roman and Byzantine periods, have now turned into a shelter for the Syrians displaced from the villages of Idlib countryside after their houses have been destroyed by the shelling. Most of them come from the village of Kafrouma near the archaeological village of Serjilla.

The stones of this archaeological area, which withstood the fiercest battles in history, were a reason for Umm Mohammed’s reassurance after she and her seven grandchildren were displaced to one of these caves.

She is confident that the shelling will not affect her and her grandchildren, especially that barrel bombs had caused the loss of two young men of her children to become the only person responsible for bringing up and protecting their children.

Umm Mohammed kindly invited us to enter her “modest” cave as she described it. She hung sheets of cloth to make room-like sections inside the cave and fixed metal shelves on the archaeological wall to keep cooking and kitchen stuff on. The stone house was archaeological in the full sense of the word; it has no electricity and no water, and even the sunlight does not enter it. Everything is the house is primitive; they even use firewood for lighting and cooking.

“We heard there is a lot of aid but we have got none. I don’t know why?” Umm Mohammed wondered many times as she talked to us. She stressed, “She has endured the hard life here, coping with snakes and scorpions, but is it reasonable to eventually die of hunger?”

She added, “I don’t deny that good people provide us with bread but we’re very exhausted and are in a desperate need for aid especially that the diseases have started to find their way to my grandchildren due to the shortage of water and malnutrition.”

Strangely enough, the sounds of bombing raids on the neighboring village overlap with the sounds of the domestic animals. This seemingly deserted area includes sheds for sheep, chickens, and even ducks, which the villagers have brought along with them when they fled their villages.

Ahmed is one of those who have fled the bombing. He found one of archaeological caves a suitable place to farm the hens he managed to save from the bombing, especially that he has lost his house and his agricultural land.

When asked about his situation here, he said, “I am not satisfied at all with what happened to me. I spent two years here in this monumental tomb that is full of insects.”

Like other residents of the region, Ahmed used torn sheets of cloth instead of walls to separate between the different rooms. In so doing, he would be safe from the barrel bombs and chemical weapons attacks on the region.

However, it is as he said, “this does not mean that we feel happy as we are only still alive for the much death around us and the too many souls climbing up to the heavens.”

Under the roof of an archaeological tomb, a number of students have assembled in a simple school classroom in which the parents have found a simple solution so as their children are not deprived of education.

In this region that now includes from 130 to 135 families, a man volunteered to open a simple school class to educate the displaced families’ children.

Education is the only activity witnessed among these antiquities since most men are jobless, including Said who used to work in Lebanon but he opted to come back to his village to fight on the side of the Free Syrian Army (FSA) forces and eventually he has become jobless.

“The lack of sufficient weapons for the FSA forces and the fighting fronts is the reason why I am idle, especially as those who do not fight do not have another work to do,” he explained.