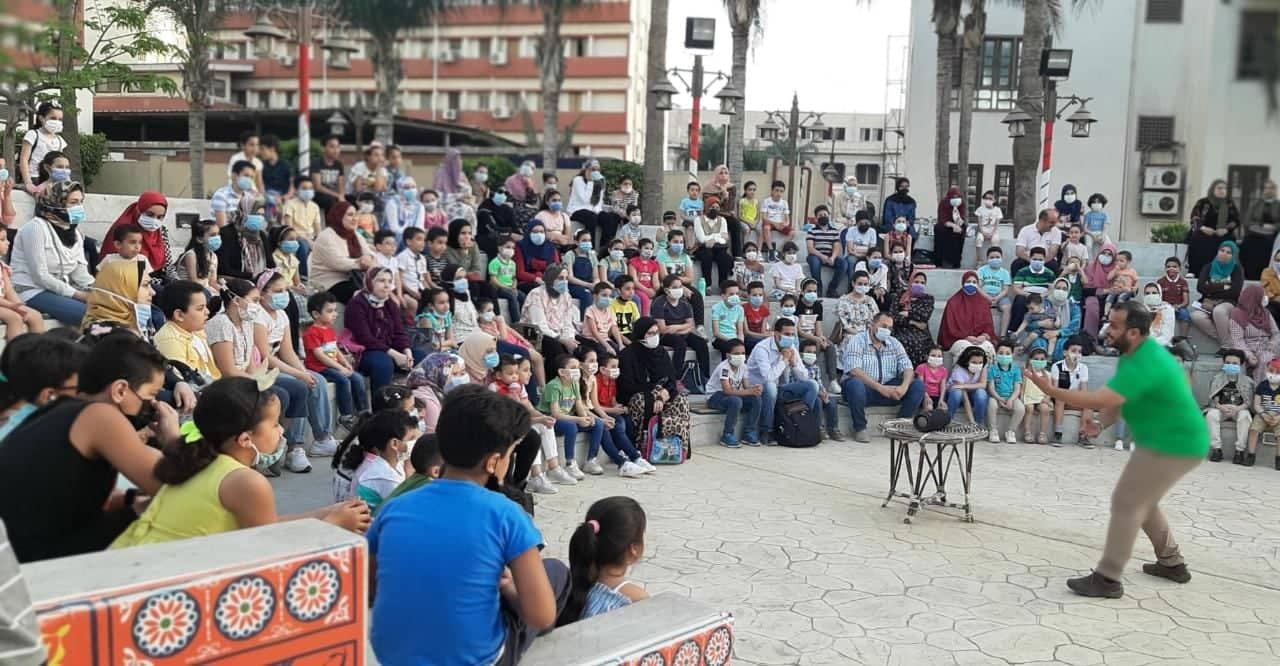 Surrounded by children of all ages, with their eyes fixed on him, Haitham Shoukry, a young Egyptian storyteller, can make their imagination go wild with his charming words and captivating tales.

Carrying his backpack on journeys to remote places, Haitham does not refrain from visiting desolate deserts and distant villages to meet with the children. This is his invaluable pleasure and passion, to recount his interesting stories.

Village children eagerly wait for their storyteller friend’s visits. With him, they not only listen to dazzling tales but also participate in composing them, developing their events, and setting their ends. They interact with their heroes, believing in them and sympathizing with their situation, distinguishing between good and evil, and learning about what is right and wrong. In such a setting, you will listen to morals and lessons uttered by little children, followed by their laughter and guffaws.

Haitham recalled his early childhood and memories of his late grandmother and her wonderful, interesting stories. “I would put my head on her lap as she continued telling stories. They were priceless, unforgettable moments,” Haitham told Tiny Hand, “This passion grew in me and got stronger until my family members started accompanying me to public libraries where I began to read and tell stories to people in turn.”

The importance of Haitham’s storytelling initiative is manifested in his insistence to reach children in villages and thorps, to break the idea of centralization. Before embarking on his journeys, Haitham coordinates with local people to gather the children, with the aim of making them fall in love with books in an interactive way and encouraging them to read. “In order to do this, we must talk, play and laugh. With such details, we can communicate many things,” he said, “I try to encourage children to read and try to reach people outside big cities. To achieve that, I am traveling since 2000 to various places, schools, clubs, hospitals, open spaces, and orphanages.”

A storyteller, designer, and coordinator of children’s events, Haitham integrates different visual and performing arts with storytelling and narration, in order to create an interactive space, with a greater dream of turning children from mere recipients to an active and essential element within the story, shaping its details, performing them, laughing and impersonating the characters.

So far, Haitham has given a lot to Egypt’s children and still has so much more to offer. “Haitham worked with one of the most prominent cultural centers in the Middle East; Germany’s Goethe Institute,” said one of Haitham’s friends, “He used to roam the villages of Egypt, east and west, north and south to read stories, talk with the children, play with them and make them laugh so hard.”

“Haitham had once have one of the most beautiful mobile library vehicles in the Middle East,” he continued, “When the donor stopped financing the mobile library project, he carried his backpack, filling it with books and toys. He does not care about donors or asks for financing. On foot or by car, he will keep going to the children; what is important for him is to reach the children, throw himself among them, and live with them the details of his stories, taking their tiny hearts and imaginations high to the seventh sky.”

There are no age restrictions for children who are allowed to attend Haitham’s activities; everyone is welcomed. With the young man presenting his works in open places on the street, in alleys, and neighborhoods, it is possible for an older brother to attend accompanied by his younger siblings. Haitham takes this into account while telling his stories, and does the same upon arranging the fun interactive games that depend on teamwork so that the games will be suitable for all age groups. He divides the children into small groups to read a book, play games, and indirectly learn the importance of teamwork.

Haitham is keen to deliver his messages through his tales’ heroes. “I speak about a general topic or about events taking place around us. Sometimes, an official, for example, tells me that children hit each other, do not work together in a team or do not keep their school clean,” Haitham told Tiny Hand, “I search for a story that deals and discusses this topic or the problem they experience.”

Listening to his fables and tales, which he tells in an honest, convincing way, children dive into their worlds and believe in their heroes. In his events, children are asked to give their opinions or analyze a story’s character, to provide them with a free space to say if this or that behavior is wrong or right.

The Egyptian storyteller asserts that laughter is the most important and influential thing on children and their psyches. “When you create a space of joy, you can work with children smoothly, especially when laughter is realistic and without exaggerations,” he explained.

As for children, their reaction is seen in a number of forms. Upon coming back to the same place after a year or more, Haitham finds the children able to tell the story in literal details highlighting a long-term impact.

Being his only recreation, Haitham plans to continue his career. “I like to recount tales and travel. From 2013 to 2018, I was in charge of a mobile library, traveling all around Egypt,” he said, “After the project’s funding stopped, I carried my backpack full of books and toys and started my own tours.”

Still, Haitham hopes to have another opportunity, like that of the mobile library, so that he can reach much more places. He also wishes to inspire other young people so that the idea will not be limited to him, considering sustainability very important so that many storytellers can cover every corner of Egypt’s villages and cities.

Despite all the difficulties facing the young storyteller, the latest of which was the Covid-19 pandemic, which stopped his tours for a while, the same obstacles created an atmosphere to change his programs, offering them online. The success of the idea made him think about modifying his programs to be suitable for distance viewing.

Having missed the direct interaction with children, Haitham resumed his work in a more powerful and active way after the pandemic, searching for new villages and destinations in Upper Egypt, the Nile Delta, and others to visit. In the near future, he aspires to resume his communication with the largest possible number of children and to see their laughter and smiles anew.